Asteroid belts arise from the accumulation of dust particles into larger composites. The gravitational pull of the planets and moons in each system draws the accumulating mass together into deposits large enough to be profitably mined.

In the past, scientists shared their concerns about an overall reduction in the supply of raw resources, but in recent times, the discovery of additional ore in unknown sectors of space has alleviated this anxiety.  There are some experts who have maintained all along, however, that the ongoing excavations on the frontiers of nullsec, where new belts are still being uncovered each day, has provided more than enough incoming ore to satisfy the industrialists of New Eden.

Roaming is a reminder of how little of Eve I know and have seen. I've never seen this asteroid before. 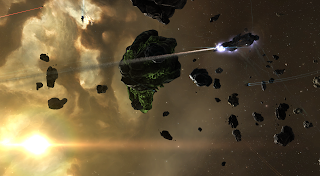 It is green and interesting and was very pretty as it tumbled. I was on interceptor number two for the night and my attempt at a combat fit Taranis wasn't leaving me very thrilled. I've never flown one before tonight. I found myself flying it like my Ares or Stiletto. It left me clumsy because it was not as agile or capable. It doesn't tank like my Jaguar so as I run my ancillary armor repairer I'm doing okay and then I'm dead because something pushes me to deep to recover fast enough. A lot of that is my inexperience with active reps and some of it is just my expecting the ship to be something else.

This is also my first combat interceptor fleet. People talk about them with a lot of excitement. I have had Razor moan about how amazing the Taranis is since I first met him. I remember when he learned I couldn't fly interceptors and reacted as if I had told him something vile and horrifying. The Odyssey changes brought combat interceptors as a regular fleet comp and they have always seemed amazing.

Now I'm not so sure. The warp speed and bubble immunity is nice. With no larger, support ships the DPS loss for the faster, tackle interceptors isn't acceptable. The fleet itself reminds me of my early days when we ran in full DPS ships but the DPS of the combat interceptors doesn't exactly mow things down the same way say a battlecruiser would.

This is a time when being shit at fitting is not helpful. I have no ability to create an inspired fit that will make me happier with the goal of the ship. Before I get worked up I will have to try something else, even stupidly and badly, that may let me reach a happier medium. The dual prop idea was very nice and I love dual prop on Cynabals and Vagabonds but maybe dropping that and substituting tank will help. I know that my general want of speed and agility bias me towards and away from different ships. A combat interceptor is not a tackle interceptor and maybe I can just wrap my mind around it and develop a different flying style that does not rely on the things my normal interceptor flying relies on. 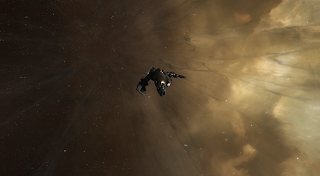 I seem to have a love or hate relationship with most ships. I try them out and ether like and appreciate them for what they are and how they make me feel or I dislike them. I often struggle with trying to like ships that I know are statistically good and that do amazing things. The Rupture is the perfect example for me. It is an amazing ship. We do amazing things with it. I know that it is good at what it does. I don't enjoy flying them. The last thing I would ever undock without being told to is a Rupture. I loathed the Tengu back when they were the god ship. I hated mine to the extent that I dismantled it and sold it and refused to fly one again.

I find the times when I do not like good ships frustrating. It is one of those moments when I want to be like everyone else and gush over ships due to their stats. But until I fly it... until I do my thing in space... I will not know if I like a ship or not.

Instead of fretting over fits I will do the sensible thing and go to those that know how to fit and know me and get input on what I can do to improve my experience and still be an asset to the fleet.
January 02, 2014