Public Service Announcement: Autopiloting your Freighter in low sec may cause pirates to spontaneously appear and kill you. Please use the autopilot function on the map to help avoid this.

Today I discovered that Jaguar has bumping power.  I have ascended beyond Miner bumping and moved to Freighter bumping.  I stalk the space lanes and find innocent  helpless, defenseless, freighters jut going about their job auto-piloting through low sec.

You see, Titus was running through a system with an alt in a hauler and saw a Providence drop out of warp 14k from his gate.  He was like, "Provi on the gate!" and then, "Oh, high sec."  That was followed by, "WTF?" and a call for assistance.  All pirates on deck!  Auto-piloting freighter in low sec.  Come kill it!

At that moment assistance was two people.  Me, in a Jaguar one system over and a Tengu 8 jumps out.  He turned his cloaky hauler around and followed while I came at full speed in the Jaguar.  We made it to the gate as the Providence landed, again, 14k off the gate.  Wow.  Is this real?

I pointed him and aggressed with the Jaguar and warped off as the hauler bumped him.  The aggression was to flag him and stop him from logging off.  Now his ship is trapped for 15 minutes in game and to get away he will have to escape us through our mistakes, his success or help.  My bumps are not huge but freighter's take a long time to align.  Little by little he was delayed.

This is an all hands come help call.  Anyone is invited.  It's a quiet time for our groups.  He made it through another jump gate, but we did slow him down.  We bumped him some more before he got into warp.  Off to the next gate.  Titus came in with a Hurricane to start shooting it.  We had a handful of people running to help.  Freighters warp slowly.  We landed on the gate first and had that dreded moment where you wonder if he warped somewhere else.  Then, nope.  Here he landed 14k away. 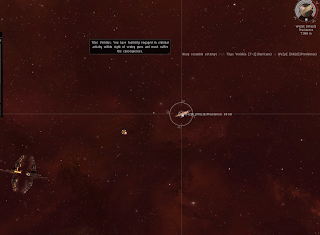 He was there?  Maybe he had tabbed out and came back to find himself on the wrong avoidance list and dying.  I can only hope that this was a derp and not the best idea ever on his part.  Sadly, it was empty. 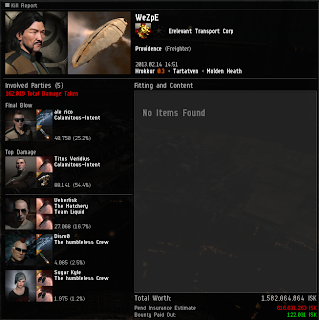 A nice way to start the morning for the little Jaguar that could.
February 14, 2013