I was staring moodily at my ship list.  The day, it seemed, had been consumed by the endless discussions about the battlecruiser changes.  My mood had been steadily dropping and by the time that I should have been in bed it was on the floor.  I accidently uninstalled my Aura app a few days ago and I have not taken the time to re-add all of my API keys.  Because of this my skill training statuses across all of my accounts have become a mystery.

For some reason, I was bright enough to check Sugar's skill queue. Small Blaster Specialization IV would finish in eight hours and then the queue was empty.  Okay.  The good news is I caught it.  The better news is when I wake up I can start using T2 hybrid turrets.  An entire range of ships has opened up to me.

However, what caught my attention was the fact that to get medium T2 hybrid I had to wander through T2 small hybrids.  I've kept most of my frigate focus on Minmatar frigates.  I've not thought much about Gallente frigates because my drone skills are still lacking.  What I did realize is that I had a Daredevil in my hanger.  A Daredevil that I won on Blink sometime over the summer and realized I could not fly due to it being a hybrid turret platform.

I then dropped 10 million into Blink, picked three random tickets, won a Wolf and cashed out 33 million ISK.  With that itch satisfied, I activated the Daredevil and looked at it for the first time. 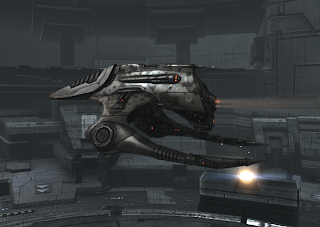 It is uglier then I realized. 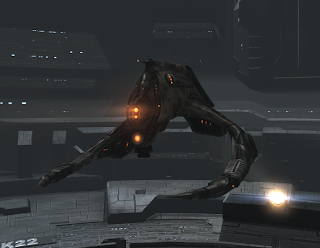 It is not that I am so much in love with the Daredevil as that it made me realize that I had finally stepped out of being a highly specialized Minmatar only pilot.  My previous training outside of Minmatar has been support functions for Minmatar.  I fly a Cynabal with Minmatar and Gallente Cruiser at V, but a Cynabal is an Angel Cartel pirate cruiser that uses projectile weapons.  The Daredevil a Serpentis ship and hybrid blasters.

"But Sugar, it was capable before!"  Not by my book of reasons to do things, it was not.  If I wrote a bullshit mathematical equation in words (which I will do) it would say something like, "If Weapon Systems = T2 greater then  T1 = Choice T2 over T1"

I'm sure that is terribly done and made someone burst into tears and stab their monitor.  Regardless, if I can fly a ship well it does not make it acceptable to fly a ship poorly because I want something different right now instead of a week from now.  I also don't fly shiny things not fit as well as they can be.  Now, this BS equation states having T2 vs T1.  I am an advocate of people getting out there and doing things instead of waiting for T2 systems, but once you HAVE the T2 systems use them and put patience into the skill queue.

In celebration I wept for joy and immediately remapped Sugar into gunnery.  I'd been hemming and hawing about doing it for months.  I then got distracted by the Destroyer and Battlecruiser changes. Once I finished those I then wandered into deciding to fly another racial type of ship.  Finally, past that I realized I just need to take time to learn all the weapons systems that I need.  The skill training that I completed has given me the ability to fly all the T1 hulls under Battleship and I can fly T2 hulls in 2 races.  It is time for experiments and change.
January 11, 2013