Let There be Color

"I really wan't to get a Scythe to mine in?"
"Why?"
"Because they look badass.  I just don't like that if you want to mine, you get the same ship as every other miner."
"If you are upset that special snowflake mining is hard... uhh... try a battleship."

I was trying to give a plausible solution to a terrible desire.  My first thought was the head desk over it but then I decided that was the wrong approach   Of course the mining frigate to those that have spent hours and weeks in sub-optimal mining conditions waiting to get into optimal mining conditions (those of you thrashing and bleeding from the ears over the thought should get some cotton balls and a calming cup of tea) it is silly to tun back around and throw all of that away.

However, he has never experienced life without a mining frigate.  That two week gap is enormous.  I have been playing with the tutorials and using the venture as my primary ship.  It is amazing and chews through the tutorials like butter.  I can mine, blow NPCs out of space, do distributions missions and all without breaking a sweat.

But this is about originality.  While the Venture is original and new and different for me, for a week old character undocking there are dozens of them around the newbie station, in the newbie system belts, and being flown everywhere.  They are not new, special, or interesting.

People want to be Special Snowflakes and Eve does not give them this.   Babbling about unique ships the other week, I pointed out that most of us hold our specialness on the inside.  People want it on the outside.  Players have been cooing for something as simple as corporation logos.  Corporation logos which would be visually small and very personal but we'd like them anyway please. 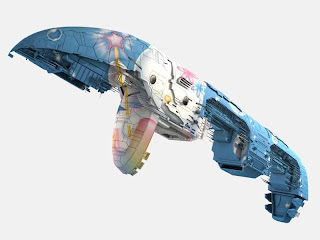 We need ship skins.  When I was going to say something snarky about 'who cares' about his ship I was struck by an image of me buying dye packs in Diablo III so that I could create this blue and white armor effect.  It was a complete waste of gold coinage but damn, I felt better when it was done.

Diablo didn't let me put a Hello Kitty skin on.  Nor does CCP need to give us the ability to have a flesh colored Thorax.  But people want some form of individuality and personal choice. Its been commented on before by others.  CCP has been steadily putting new ship skins into the files.  They haven't released anything yet.  The people who like to data drive are constantly pulling up a stunning array of skins for the ships.

Customs skins don't have to be personally custom.  People would swoon over a small bit of personal input.  "My throax is blue and silver," would work fine.  It doesn't have to be pink, or glitter, or even My Little Pony Brony inspired.  A thimble of personal choice has the potential to make all of the difference.