It may be time to join Signal Cartel 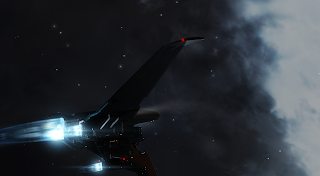 The last time I took a screenshot was November 12th, 2017. I didn't notice until I looked for the one today. It also changed my entry into this post, but what is a girl to do?

I logged in to look at Stargates. After I left the CSM, I had to leave Twitter. Twitter is easy to fall into when you have people to talk to. I checked it regularly and I was in such a habit of checking and commenting and answering and responding that I had to remove it from all of my devices and force wean myself from the habit. The side effect is that now I do not check twitter very much, and when I do I'm reminded of the fun people that kept me playing Eve.

Today, it was just me and my Diplomatic Shuttle out to look at Stargates. My Jaguars have been irreparably broken by CCP and loaded with missiles. In case anyone wondered, I have missile skills. I simply refuse to use them. My Jaguars will forever sleep with their turrets loaded. I shall kiss them goodbye and turn out the hangar lights.

Times have changed. CCP has changed. I haven't changed to be fair. People go, "Sugar, you are still around?" Yuppers. Still here, living life, going to work, playing video games. I got back into showing dogs.  I just haven't played Eve. One of the side effects of the CSM was that I lost my personal game in the process of becoming a representative for others. I became a conduit but a conduit is not full of its own thing. In a similar fashion my exterior was the same but my game became empty. When I left teh CSM, I lost the games of others that kept me going.

I don't regret leaving. And, I'll one day finish my story. It is all written, I just have to transcribe it here. That should be fun with CCP sold to a new company. I feel rather unfettered.

But today, I also learned that I no longer cared. It was a good thing. I had many cares preprogrammed into my gameplay. Most of those were aimed around not dying and becoming a target of others ridicule or allowing them to show power over you by being the person that killed you. Some of that is my personality and some of that is the culture that I absorbed. But time happens, people change, and scars that are left over from healing after the CSM have left some toughness there. I may not enjoy it but I really don't give a fuck. In a similar fashion to why I don't wear makeup. I don't have to be the Sugar people want to see. I'm the Sugar Kyle that I am. I am always going to be me and bending over backwards to try to become something else didn't work out in the emotional end.

I purchased a diplomatic shuttle. I'm pretty sure I have a bunch of them somewhere, but why look? It is rather cute. I never sat in one before even with their implementation being part of my CSM cycle. I picked the shuttle so that if someone killed me it'd be a little statement on my side. And then I undocked and flew around.

I no longer cared what the killboards said and what anyone would get out of killing me.

Why care? It isn't me to care. I don't have to please anyone with my activities. And with that I decided that maybe I didn't care enough that I could not care about my own rebellious knee jerk reaction to rules.

Let's see if I log in more than once.

Here is my crew. Inty just turned three, yesterday, for all those who remember when I brought him home. Anubis is 10 months and Phoenix 3 months. Anubis is my grandpuppy, I owned his grandfather. He and Phoenix are Afghan Hounds and my current crop of show dogs. 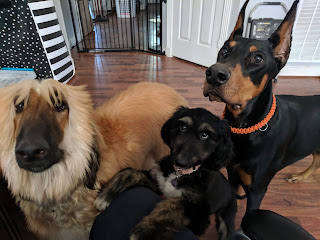