What a pretty ship. 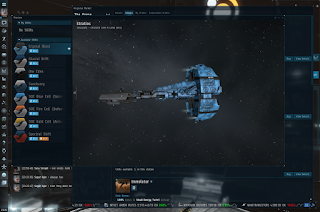 My tastes have always been simple. I like the color blue. This would be perfect in blue and white instead of blue and black but it is near perfect and so sweetly, blue.

How does one fit a ship? One of the things I shed early in my Eve career was fitting my own ships. I'm not a min/max type of person and I dove into a PvP environment where my actions effected others. That gave me a responsibility to fit the 'best' way. In the end, I never learned how to fit ships in Eve on a deep, personal level. I am not interested in fitting tools or maximum stats. They are important in the game of Eve but not important to me.

But the habits run super deep. Looking at ship fitting makes me twitch. Not because I cannot put a ship together but because what I am inclined to do probably won't be the right thing and way. Then the memory of mockery and being paraded before others and mocked for ignorance tickles at me. It is my constant love hate with Eve. I enjoy the game but I dislike some social things about the game for the same reason I dislike sports. I'm not competitive and that urge to insult and belittle people for 'winning' is not something that I possess. It is not that I mind loss it is that being mocked saddens me. Not because I failed but because it is such an unpleasant aspect of human nature. But sometimes one has to learn to close their eyes and continue on. Similar to how I learned not to google myself to see what people were saying during the CSM.

I've always been that person that used the gear that they liked not because it was best. Rarely do I end a game with tiered gear with the best. I am heavily effected by the design. Similar to how ugly my Legion always was. Bafflingly ugly.

I was told they redid some of the looks.

But, a Sttratios I shall get and some scanning implants. And then I shall fly into the darkness to find some more skillbooks. I think I need to learn some ice harvesting skills and get a little ice ship for that. Maybe its finally time to play in wormholes for me.