The lack of perfection

I had the pleasure of having Keskora Yaari. We met a bit after I started the CSM and hit it off. As friendships often do it developed into being about the people and not the medium that we met each other in. My new house has a guest room (my previous one was taken over by my mother who moved in and never moved out) and it was fun to have someone in that I could babble about a large part of my last six months of house renovations.

I tried to pamper and spoil her. Those are always the most fun things to do when a friend comes over. I did make sure she was stuffed full of local interesting things. It is only fair, after all. My abilities as a host have improved and I was pleased with myself.

One of our interesting links, outside of Eve, is dogs. We are both dog people. Over my years blogging I have discussed and shared time my creatures. From the passing of Nyx to the acquisition of Intuition. He is doing great by the way. He is two and a half now! 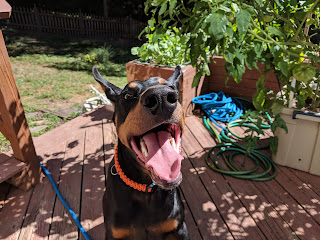 We discussed Eve some but it wasn't the focus of things. Yet, so many things wander back to Eve's interactions with our life and the people that we met.

I have another puppy (dog number three). He is an Afghan Hound, a breed I have had for a long time. I didn't mention my dogs as much for some parts of my Eve career. That is because there seemed to be little interest in my corp and little interest or sympathy when I mentioned pets passing. Being that it is very personal to me, I just gathered up that bit of myself and moved it mostly to the side.

However, Keskora is also a dog person and I dragged her to a dog show while she was there. I was entered with my youngest puppy, a six month old terror. I expected... problems. I let my hope get in the way and I hoped that my puppy would give me the performance I wanted from him.

It didn't happen. I wound up in tears with treats hanging from my pockets as I tried to get him to act as if he had not been trapped in a box and beaten his entire life. I got a lot of pity and a lot of suggestions to work with my dog. It was humiliating. It is also a very common occurrence when it comes to starting puppies. Dog shows are over whelming and puppies often shut down when things get to be too much for them. Unfortunately, you never know until you do it.

It sucked, we went home and had a great dinner and life moves on. The next morning I woke up rather down. I won't lie and say that I bounce back from humiliation well. I don't. I never have. I suck at pretending that I do. Failure is a part of life and one I am okay with. I know that I am not a perfect person. And in these times, I seek advice.

What I could not find was advice about people being humiliated by their dogs and how they worked through it or just that their dogs grew up. All I found was people discussing how perfect their dogs are because they worked with them.

How much I was reminded of when I started Eve. As I floated off into the distance, trying to figure out how to turn my ship, it took my 30 minutes to find a post on the old Eve forums that told me to double click. That moment was the founding of my blog and my blog was founded upon my own humanity. It was not my ego that drove me to write. I enjoy writing for the sake of producing words. It was my desire to not be alone in my imperfection. And if I was alone maybe I could stop someone else from being alone too. Perhaps that is ego but I'd prefer to think of it as desperation.

I'm not a social person. I do better these days but I am an introvert and easily exhausted by being around any but my closest firmness. My job requires a lot of interaction with strangers and it drains me of any other social need. My life is more a constant state of recovery from work then a need to go out and seek stimulation.

Finally, some people came out and discussed the struggles of working with young dogs. It took a bit of a plea on my part to stop being told to spend time with my dogs and to get people to admit that their dogs also took work.

This is what reminded me so much of my time playing Eve. It also makes me wonder about myself. What key do I miss that causes me to admit to my mistakes and embarrassments? Maybe it is why I never became a super powered player. I guess it is that lack of confidence. I do wonder at times, and I admit a bit of Envy.

I wish, I could stand and with cocky arrogance announce that I am amazing as if my flaws did not matter.