Safety is a Falsehood

Is this Eve ghosthood? A specter formed of thoughts and memories of times past? Are there chains for me to rattle and hearths to haunt? Should there be any perspectives and opinions from this outside opinion.

Upon closer inspection there is chainmail. 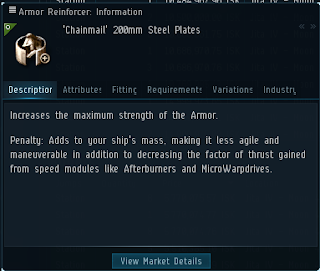 Rattling chainmail 200mm steel plates, the eerie blue haired specter of Sugar Kyle floats across the chat rooms of old. The discussions are a thousand whispers (after all she is docked at Jita 4.4) that flicker and flow. Are they memories or are they reality? So much has changed and at the same time, nothing has.

Over the years I spent a lot of time pondering safety and risk in Eve. I opined and write. In the end, when I no longer undocked and had given up PvP out of stubbornness, I came to the simple conclusion that safety and risk in Eve are defined by the players. In a game where there are no goal points, the player society has created dozens. These intangible, unenforceable, and subjective points are here because we as people seek to define the world around us.

It is not that Eve is not safe. It is that the player base decided that losing ships and items is bad.

Now, in a way it is bad. After all, I'd not log into other games and have things 'soul locked' to me and other such fun, sparkly terms if losing stuff wasn't an overall negative. I don't like losing things in life. It is rather stressful. The general loss of stuff isn't good. But it also shouldn't be bad.

Yet is is. In general, it is bad to lose ships in Eve. Undesirable. Unpleasant. It gets you laughed at. It can be the basis of scorn. And, it can become a thing of great pride when the proper person uses it as a tool and owns it.

Loss is fascinating in Eve. It doesn't play along the normal rule lines as one defines the word. Over the thousands of words that I wrote, they all danced around the simple core element. I did not fear loss. I feared the reactions when others knew of my loss.

"Safety is a falsehood," was something I read today. It made me sigh because the conversation was about someone that mined all night in null sec while asleep and didn't lose their ship.

"They always say some areas of null sec are safe," I said.

"Safety is a falsehood," was the response.

"That concept will consume you," was more or less my response. I don't feel like looking at logs.

The thing that fascinates me about Eve has always been the social interactions and the strength of it while at the same time, independence and personal goals are touted. On the surface it is easy to see them as contradictions. But look past and it is a reflection of an interactive, complex gathering of people.

I doubt I'll ever stop finding this game fascinating.
September 26, 2017