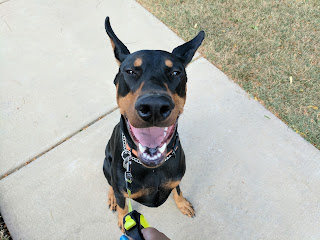 A few people have asked me how he is doing. The answer is, "Just fine." He is 22 months old right now. His birthday is in November and he will be two.

Inty has been a lot of fun and a touch of a challenge. He is smart, stubborn, and good natured. He really, really wants what he wants without being hard to train. Mostly, it makes him look like an idiot. Autumn hates him and he has not yet, inn two years, figured out that she is not going to start liking him or want to play with him. 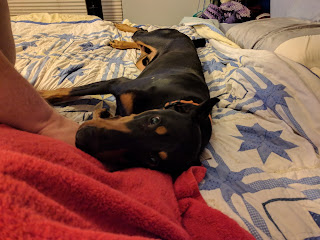 I forget that people don't see the goofy, cuddly creature that he is. (For size reference, he is on a king size bed). Instead they see this: He has grown well. He is a sweetheart, and an utter asshole that flunked puppy school. Not because he doesn't know what to do but because he doesn't care. Inty loves other dogs the most. Other dogs are greater then treats, toys, and attention. I cannot compare. After all, he knows who I am and where I am. Why sit when we can MAYBE ALMOST interact with another dog?

Sigh. So much potential in such a silly package.