Have you done your Eve Vegas Survey?

I did attend Eve Vegas to the shock of many. I'd already paid for it and allotted the time. It seemed that I should go. 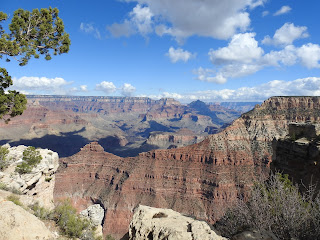 I went to the Grand Canyon and Hoover as well. This is not the space to discuss those amazing places or my new Camera.

Eve Vegas was a bit harder for me to go to then I expected. I've detached from Eve for the most part these past months. It is very easy to be angry, frustrated, and bitter about the past that I lived on. The game, its development, and the players move on while I find myself emotionally stuck. That emotional stickiness does not need to be given to everyone else. Part of experiencing it was shielding people from it. But, as I accepted my items and stared down the poor gentleman that tried to put a wristband around my wrist, I realized that I wasn't in as good of a place as I had hoped to be.

That is where the Survey comes in. There are a few things that I could say and did say. A few of the questions made me want to say a bit more.

One was about the location. Planet Hollywood has hosted Eve Vegas for the last three years. It is not my favorite hotel by any means but it is an excellent venue. I spend a lot of time walking through the various hotels. It is fun to see what they stick in the corners. 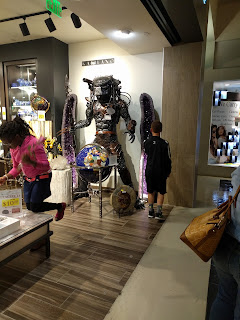 This is more than many casinos. Most balance on a theme and have a limited amount of space due to the size. A larger casino, such as Caesars is more focused on high rollers and has higher dollar value. While the Rio, off the strip, has a very limited number of places to eat.

Planet Hollywood wins because of the food. It allows all budgets to easily get things between events and that is a crucial thing that the Eve Vegas would lose if it moved to the Linq.

Food in Vegas is no longer cheap. You can find a decent priced meal but you won't just trip over it. I watched my buffet price double between Friday and Saturday. As in 24 dollars one day to 40 the next. The same buffet but different days. Vegas nickles and dimes you and we must be conscious of giving people a flexible solution to their budgetary needs.

Planet Hollywood is roughly in the center of the strip. The year that Eve Vegas was at the Rio, getting to the strip was a pain. This made entertainment and other dining options harder. Eve Vegas is a vacation for many people. They want to cram in as much as possible. Allowing easy access allows more people to have greater value from their time. That increased value rolls to higher chances of players coming to another Eve Vegas.

I managed to have a twenty minute conversation with the ladies from the company running the store. I also made some promises that I need to follow up to getting them information gathered from the players in the past about what they want to see in the Eve Store.

There was a key chain for example. I was both pleased and not. A key chain! Finally! It was an archon. I did not want it. But I did buy it. I purchased it to put my money where my mouth as been. I've wanted a key chain and I've wanted a mug. But what I wanted as a simple, rectangular key chain that said EVE on it. I purchased this second prize because I wanted to support the store. It became quite a passion of mine and I do believe in supporting what I want to see happen.

I also understand why they did the wrist bands. The previous years have had  large number of people that attend without paying. But the request to wear a shoddy paper wrist band for two days and the nasty, nasty staff from the hotel that checked them needs to be refined.

I attended exactly one talk and that was Keskora Yaari's Wormhole from Scratch. She was amazing. I attended no roundtable. While I felt strange without my notebook and pen I was too detached from events and caught in an emotional storm to do much more. For me, healing will take some time. For everyone else, fill out your survey and tell them what you want. I don't care for the Halloween weekend and tie ins. Others may have loved it and found ti a huge added value. No one knows if you don't say and when someone gives you a place to notify them, use it.