Blog Banter 77 - It is a sad thing, but one day the universe too will end

In this month's blog banter the question is basically, "Do all of these signs point to Eve dying?"

The simple answer is, "Yes."

But simple answers rarely do anything but make for quick reading.

Over the last four or so years, I've been very invested in Eve. I've pondered it personally and socially. I've flipped through the public's responses to it. There have been ups and downs but I was always positive that Eve would continue on forever.

That was the fan girl speaking. The rational is that it will not last forever. I don't think it will be some dramatic ending as someone bashed the server racks with a bat and CCP places the company logo on a boat and shoots and flaming arrow at it while it floats into the sunset. I think that it will be a gradual thing and as long as it continues to bring in money it will stay alive. CCP may stop developing it but there are many games that continue on with productive lives years after their development stops.

Eve's population is aging. We are proud of it but with aging comes problems. As I pondered this topic today, I realized that I know a lot of people in Eve that are like me. They don't have children. They don't have huge family connections. And I wonder, how many of us are there? Sure, we're a reasonable population but at the end of the day people have lives.

I once had a long discussion, in which I was looked at as if I am crazy, where I said that I believe one of the greatest reasons Eve does not have a large female population is because women are still most often the family caretakers. I was looked at funny for that does not go along with the narrative that Eve is full of woman hating evil and every female is chased away and there is no other reason but this.

Yet, time is so valuable. In January I got Intuition. He is eight months old this week. 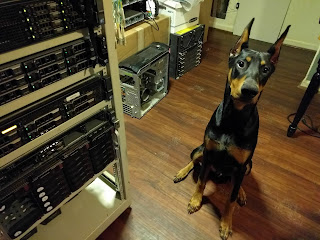 I have so little time. I work 12 hour shifts. I've worked them for a decade now. In October, I got a lateral transfer with better hours. I work 1000-2200. I get home, tend the puppy, make dinner, play with the puppy, change and shower, walk the puppy, play with him some more, stop him from chasing the cats, harassing the other dogs, stealing tomatoes from the counter, and find I have no more time.

Eve's greatest weakens is also one of its coolest features. Eve takes up a lot of time. I cannot sit down and dedicate four hours to the game. I have to get up. Make dinner. Prep dinner. Tend the puppy. Water the plants. Put clothing in the wash. Do dishes. Make more meals (I'm baffled by how much time keeping food on the table takes when you make all of it), tend the dogs, tend the cats, try to sleep 6 hours a night.

The list goes on and time in finite. I just don't have it to give except now and then. Only, Eve isn't a now and then game. It isn't a game you drop in and hop out of. It is a game that leads you down the rabbit hole and unearths you six hours later. I think that is wonderful and I also think that many people cannot commit to it.

There is not enough individual stuff to do in the game. PvE has been pushed aside for so long that I wonder if it can recover. The developers that have been handed the task are talented people. But, a decade of neglect must be overcome and as I watch plans shatter, and shatter, and shatter again I wonder if it can be done. People may kick and scream that Eve is a social game and it must be played with others but the simple reality is that people need to be able to dangle their feet in the water and enjoy a cool drink and the warm sun instead of committing to a triathlon every gaming session.

That is what makes it unappealing. That is when you decide if you want ti log in for the thirty minutes you have to spare just to get moved to a position to hopefully start an activity the next session. At some point, adulthood comes knocking and it demands its pound of flesh in sleep. Contrary to popular belief, many internet gamers have relationships and those people, tolerant they may be, want some time too.

And then there is the fact that the players are fanatics. Dedicated, obsessed, in love, Eve players defend their game. They obsess over CCP. There is a commitment that is loud and clear inside of the games community. It is a very loud sound, but new people are not being retained and older players drop off. Time, exhaustion, other commitments... they all take their toll. And toll fees do not spawn from thin air.