To Cherish the Past

With my future in game swirling around in circles, I've let most of my accounts lapse until I know what I want to do again. I have plenty of skill points and skills. I can do the things that interest me as well as the stuff that does not but I have been told to learn.

I've been pretty comfortable that way. My stuff is safe in its stations. I'm saving cash every month. Things are good.

And then, six hours before down time and the Citadel launch I clicked on a link for carrier pilots.

It may have been because I was logged in. Whatever it was, I realized that Chella is a carrier pilot. I have a carrier. I have two carriers. Or maybe three? But at least two.

And one has a triage module.

I have given zero thought to the fact that my carrier would become a force auxiliary.

Did I want that? I didn't know.

With caring came my answer. Snowflake was purchased when I was six months old. I was ambitious. I would learn to do level 5 missions and be a useful member of the corporation. I never learned to do level five missions. I never became a useful carrier pilot for any group I joined. Perfect skills do not mean a thing when you don't have experience and when I might have reached that point, Thanatos were not the carrier of choice. He isn't even fit for anything but a move long ago. I could have remotely repackaged him but those sweet, sweet, large rigs to remind me of the past...

Snowflake, my flat ship with its weird little knobby head had been with me for years. Sure, he was stuck in low sec and would probably never move again. That didn't matter. He was mine. I'd miss his flat weirdness. I never found him to be an attractive ship but that never mattered. He was mine. A symbol of many things that never happened but I wish had.

I activated some game time, logged in Chella and set my course for Snowflake's place of rest.

Then I remembered gatecamps. Smart bombing ones. The things that make little shuttles go poof? Where they still a thing? Had culture shifted to some great extent of late? Could it be that... nope, gatecamps. I scanned zkillboard and saw that my most obvious path was barred.

I rerouted and made a deal. If I died, force auxiliary would I be. If I lived, Snowflake would remain in his birth state. The toss of a gate would decide.

One person... on to the next system.

Twenty-five in system but no camp on the gate I used or the station. 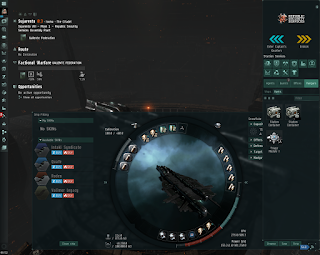 Hello, Sujarento. It's been a while. I doubt I will ever see you again. Thank you for taking care of my carrier.
Love,
-Sug