Inty is hitting that six month point soon. My husband and I have had disagreements. I say things like 'he is six months by weeks' and my husband tells me it doesn't work that way. I tried, "six months worth of weeks" and he still said no.

Intuition's birthday was November 13th, 2015. That makes him almost five and a half months old. But, if you count the weeks he has six months worth. It makes sense to me but my husband has assured me that I am wrong and making up calculations.

Whatever! He is growing up and I wanted to share.


He has finally gotten lean and lanky. He will fill back out around 12-18 months.

My yard is nice and patchy from heavy dog usage.I mowed and reseeded after this shot. We've finally convinced him that he can potty on walks. For those without dogs, dogs do not automatically go potty outside. They do not automatically go potty on walks. Dogs are institutional learners and not generalists. A few breeds are generalists such as German Shepherds, but most dogs are very situational. Inty learned to potty in the back yard. It was many, many trips downstairs. Once that was well and truly learned, we had to pretty much walk him when he was about to pop and praise him for going on the walk. Because he is smart he picked it up fast but we had many walks that ended in the back yard for him to go potty.

He is a smart, affectionate dog. He is also quite the bold, sure asshole. He harasses the cats just to get them to chase him. We have created the great wall of separation to save Sage and Autumn from him. 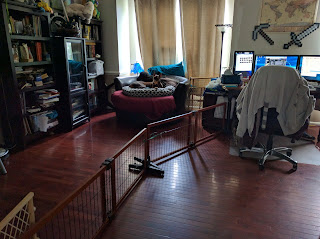 We gate him off from them because he has no off button. Sage is 11. Autumn 6. They get tired of playing. He does not. We are working on it and he is improving but he still dissolves into assholeness quickly.

Next week he starts puppy kindergarten.  His training schedule will be six months of puppy kindergarten. Then he will take six weeks off while we reinforce that learning. Then basic obedience for six weeks. After that, the holiday season will kick in and my work load will increase. In January I hope to move up to advanced obedience and by next summer get ready to try some trials to get his obedience titles. He is a dream dog to work with once he grows up a bit more and learns to focus and contain himself. The asshole pushy nothing bother's me personality is exactly what I wanted.

He is a big boy and getting bigger. He isn't oversized but within the breed standard. Still, sometime a week or two ago he managed to morph from puppy to dog in his size. A few times in the last week, when I have changed his posts on his ears and left them down, he has been a shadow of Nyx. Right now he is the same size that she was. He will be a good bit larger and I'm thankful for that. 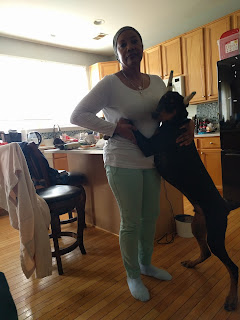 While he looks like he doesn't want to be up there, that is a lie. He is the one that climbs up us at every opportunity. My mother is 5'4 for reference. It used to be that I could lean back in my chair and escape him. Not anymore. He just climbs up and slaps me in the face. He also loves to sit in laps so I tip my chair all the way back and scoop him up. He will chill, sprawled across me from knee to head and go to sleep. It is terribly uncomfortable and I try to do it every day. 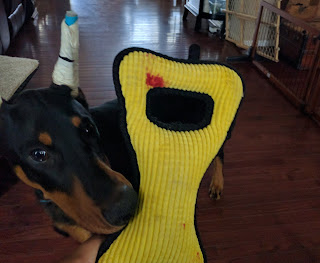 We celebrate the loss of our last puppy tooth with a blotch of blood on our new chew toy. The blood washed right off. I'm happy all teeth are out. Sometimes they need to be pulled.

In general, things are going great. I'm hoping that one day soon he can come take a nap on the bed with me. But hes still so puppy. It may be a while yet.