When There are No More Choices

It is interesting, in the end, the way choices come and go. Choices that you expected to make are not made. Decisions parade past you and toss their heads snickering as they lunge out of your grasp. Even choices made that were good choices reek of failure and hindsight.

On Friday, I knew where I was in regards to Nyx. I had some heavy thinking to do. One of the most painful parts of pet ownership is financial limits. We have worked to reach the point where we can get the care needed for our pets at short notice. The question is, "Will that care do anything?" Will it make a difference of a day, a week, a month, or a year? It is an ugly question. It fights against wants and reasons. Emotional minds and rational minds clash. We must acknowledge our limitations and potential futures. With that comes a layer of guilt and a feeling of inadequacy that almost drove me to my knees.

It makes you question the want and the reality of "I'd do anything."

When I wrote on Friday, I knew I had days. My husband had just boarded his plane as I spoke to the vet about the possibilities. I was faced with the simple realities of life. It was Friday night. I had to work Saturday. My options were the local emergency vet clinic where I was looking at 800-1000 USD a day for care or trying to get to a college veterinary school four hours away for maybe a third less. All of this was to maybe struggle to keep her going just to get to the point of a major surgery that would just hopefully give a diagnoses of what liver problem we were facing. One of those three potential problems was always fatal. The other two might be treatable if we could keep her going and responsive.

But that choice too, was taken.

On Friday night she was wobbling when she walked. She still wanted to go out and she used the bathroom. But her stool was solid black and that is never a good sign. She crawled onto the sofa-chair  (and I had to help her) which she has never done before and Autumn, my other Doberman refused to lay with her. That to, has never happened. Autumn was 6 to Nyx's 8 and the two have always been like Velcro to the other. 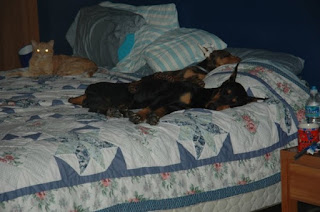 I knew what was going to happen then. She struggled to drink water. In less then 24 hours she had gone from pretty normal to an almost non-functional dog. She drank, settled down and I let myself think of what I could and could not do.

But with the morning came death. From active to unresponsive. Rational mind won against emotional. I had watched this happen to many times during my time as a veterinary assistant. My dogs body functions were shutting down in front of me. When the vet office opened my mother and I created a stretcher with her blanket and took her into the vet to be euthanized on Saturday morning.

How did it happen so fast? Liver failure is often that way. If there are no other signs, it can be days after the first ones appear that we stand before the gates of death. But it is hard to accept. Last week, we decided to get a puppy. We had talked about being dogless, getting a different breed, but we finally decided to add another Doberman. Sage, my afghan hound is 11. Nyx was 8 and that was young enough not to be bothered by the puppy and old enough that we needed to think of the future while she could still teach the new one things. Last week, not having Nyx at the end of January when the new puppy comes home never occurred to me.

None of this really makes sense although I understand it clearly. I sat with my girl even though I do not believe she knew anything at that point. I did it because it is my responsibility. She has been mine since I first met her at 7 weeks of age. She followed us around when we went to meet the litter and sat on my feet. She came home at ten weeks of age and she was mine till I sat on that floor with her head in my lap and let her go.

She is not the first pet that I have put down. She won't be the last. It is terrible. People always say that they don't want to think about it and they don't think they could do it or handle it. My opinion has always been that the time we have them makes it worth it. It is a terrible, terrible pain when it comes. But, as lost and empty as things are right now without her, the eight years prior to that day give the strength to make it through those last moments.

And then we just keep going. Life isn't only about the good things. It is also about the unpleasant ones. We can let it make us who we are. Or we can use it to mold ourselves into what we want to be.

I miss my dog. I appreciate what she gave to me all of these years. I've spent a lot of time looking at my mistakes. Those moment loom up brightly right now. From them I will learn. I'll endeavor do better next time and, hopefully, I can improve myself as a person.
December 07, 2015