The nice thing about being free rolling is that my alts are no longer set up in strategic locations that will allow me to fall back upon a support cushion of my own creation. So, when twitter reported that Empress Jaymal was undocking in Amarr I decided to go and look at what was happening.

I used Chella because I know she is set up in a cloaky ship. Quickly, I undocked her. She was only ten jumps from Amarr. Not a big deal for a blockade runner. I dropped into warp and flipped through my gates.

On the way through Niarja I passed through a cataylst gank squad. I knew they were not there for me. I was warping off as they decloaked for their fleet warp to their victim. Through the next gate I hurtled through space at a pleasant rate and made my way for Amarr's undock. But, due to paranoia mostly, I dropped out of warp 10k from the undock and cloaked up. 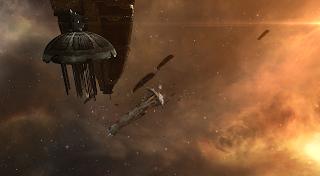 The side effect of this is that now I do have a use for a Dramiel. Warping through high sec to an event like this would be a nice little niche role for the ship. I hated being in a 'shoot me please' ship lick a blockade runner.

I was late getting into Sarum Prime. I had expected them to land on the gate but they didn't land. That confused me. I'm new to the live event thing so I missed the start. It then took me forever to realize where they were. But I caught up. 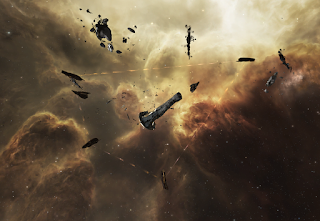 [19:58:03] Jamyl Sarum I > The Lord spoke, and blasted a hole so large in their racial memory that they will not dare again to tread foot on these hallowed grounds.

[19:58:21] Jamyl Sarum I > We continue to protect our borders from the unjustified aggression from the Republic, as their warmongering leader continues to beat the drums of war.

[19:58:51] Jamyl Sarum I > We continue to provide for our people, God’s chosen, as those who attempt to defy the Lord continue to fail in their attacks on our way of life.

[19:59:36] Jamyl Sarum I > Today however, we face a new threat. A threat far greater than the foolish aspirations of a lesser race who remain unwilling to accept their true place as servants of His will.

[20:00:04] Jamyl Sarum I > A threat not created of the Lord’s work. An abomination that reared its head as one of our oldest and most valued capsuleer loyalist organizations, Curatores Veritatis Alliance, celebrated while at ease from combat duty.

[20:00:38] Jamyl Sarum I > While we do not yet understand the motives of this force, their intentions, or their will, the Drifters must be regarded as a threat, and the Empire must ensure that her borders remain secure.

[20:01:59] Jamyl Sarum I > The presence of so many of our finest loyalists here is a sight to behold. A sight that fills the hearts and minds of the people of the Lord’s domain with hope.

[20:02:40] Jamyl Sarum I > Together we will show those who attempt to defy His will that the Wrath of God is immense. His Justice is swift and decisive. His tolerance is limited.

[20:02:57] Jamyl Sarum I > Through our hardship, through our struggle, and through the tests that the Lord places before us we will persevere, and we will find our salvation.

[20:03:16] Jamyl Sarum I > Together, we will face this threat as a solid wall. Unwavering. Unswaying. Resolute. Immovable and unshakable. Through our defense of our hallowed ground this threat will find no breach.

[20:03:36] Jamyl Sarum I > We will embrace this threat with faith as our fire. With our belief in the word of God we will consume it, burning away the evil until only we shall remain.

She then screamed "Amarr Victor" and people spammed it cheering off my screen.

[20:05:55] Peviad Vamai > We are investigating potential existential threats under the terms of the ninth condicil to the Yulai Convention.

[20:07:32] Hassin Khara > ATTENTION SOCIETY OF CONSCIOUS THOUGHT VESSEL - CEASE AND DESIST WITH ALL SCANNING ACTIVITY IMMEDIATELY AND RETREAT TO SAFE DISTANCE OF 100 KILOMETRES FROM [EF] SERAPH

[20:10:51] Matshi Raish > Empress Jamyl,I say in public that our presence and actions here are lawful under the terms of the ninth codicil to the Yulai Convention.

So then one of the dudes goes flashy yellow and everyone attacked them. I guess you don't scan the empress. 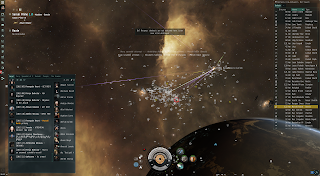 [20:17:27] Jamyl Sarum I > Commander Vamai - Do you have full transcript and readout of comms from Mentor Raish?

[20:18:49] Peviad Vamai > Yes, my Empress, all relayed communications have been sent to Throne Worlds Fleet HQ for analysis.

[20:19:52] Gavriel M'el > Empress Jamyl Sarum I was merciful to allow him so many warnings... justice was served by his own choices.

[20:20:10] Jamyl Sarum I > The Empire will not tolerate threats to our security, and will continue to protect our borders to our full capability.

[20:24:57] Jni > People get ganked and killed nearly two jumps from this system, and some of you are up making such a big deal over one guy who repeatedly wouldn't obey a directo rder from the Empress herself? Geezz 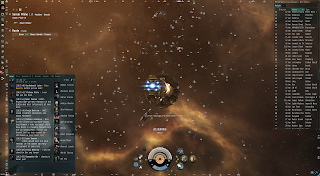 [20:25:49] Max Singularity > Jamyl Sarum I There was no diplomacy.  This is rogue justice.  There are questions to answer?

She left with no answer to Max. Interesting.