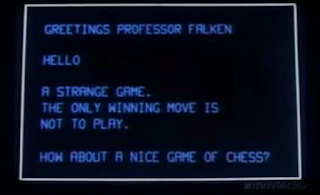 I'm not a TV or movie type of person. I've seen two movies this year in the theaters and I enjoyed both. I could not quote any lines to you but I could tell you the story and what seemed to be the deeper motivations behind them. I didn't watch much TV as a child and I watched less as an adult. That means I am often behind the curve when people talk to each other on Eve for I often have no idea as to what they are talking about in reference to popular culture.

In the last week I have had at least three people discuss winning Eve. What they really mean in the use of winning is quitting Eve or stopping their play for some particular period of time. When I first started and I'd see these references I never knew what anyone was talking about and I had to eventually ask. This got me branded as a freak because "How could I not know?"

Well, the reference to 'winning Eve' equating to not playing Eve comes from the Movie WarGames. That particular movie came out in 1983. While alive, I was quite young and not watching television. By the time I was watching television I was a bit older and I was more interested in books then eighties movies with over acted children in them.

But all of these 'wining Eve' references made me go look at it. I find the entire quote usage to not sit well with me. There seems to be a bitter sarcasm to the entire thing. However, I also know that I'm not filtering it through the movie correctly. So, I might as well do some research.

The quote is a popular one. I started to type it into google and google knew just what I wanted.

The actual quote is, "The only winning move is not to play."  I can see how that can be extended into leaving a game that has no end. You will never win it. But, if I look back at the discussion of the movie it is about nuclear war which will devastate everything once it starts. The concept seems to be that we cannot start this because we cannot counter it, we cannot recover from it, we cannot be clever enough for this to be anything but global devastation.  This movie was made during some of the biggest cold war concerns. In its place now we have terrorism as our constant movie villain. Nuclear war was a daily worry for them as terrorist attacks are where I live. (I'm right outside of Washington D.C.)

It is easy to pull one line from something and spin it into other things. I do see how this line can be spun into Eve's endless gameplay that molds and twists as you grab and work with it. It refuses to end. It refuses to stay in a particular mode.

But, I still couldn't equate leaving with winning. And, as I often do with words that don't sit well with me I wandered to the dictionary. I do love language but even common words can be much deeper then we expect them to be. And in that, I found an answer that made me go, "Oh."


There are more. But tucked in the simple definition of the word win was an answer. If they've reached their place, made their success, and found themselves past that point they wished to be then they have indeed won.

It is something to think over. While I started writing with one thought I've arrived at another. As someone who struggles, deeply, with this type of concept my little escapade into research has left me to think about some other things.

And if people want to see their leaving the game as a win, I understand it a bit better.