We are two weeks out of the next release and the changes to Sov. The sov games are live and testing. Some are grinding because they want to have their name on something. The feedback coming out that I hear is lackluster. The null sec CSM has been very vocal with CCP and active in the testing. I still hear a lot of, "Why are people going to want sov?" It is not something that I have answers to but it is a concern that I keep hearing in the background.

The petition button is missing from the F12 menu. That is being looked into. I know it was there on Friday. I helped someone make a petition and used it to go through the categories. On Saturday, it was not there. Hrm. I've poked who needs to be poked and they are investigating it and we should have some answers shortly on what is going on and why the button has vanished. I am hoping for its safe return.

Icons. I logged onto Sisi because icons have had a bit of an update.  Singular's launcher face is using a different font and a different color launch button and loading line. Sisi blue to Tranquility yellow. I'm so happy. I often have both launchers up in my third monitor and I am logging ain and out of the wrong place all of the time. There is also a data collection notice on Sisi as well now.

Discussion about icons has been hot and heavy and a new iteration is available on Sisi. Drones have been changed back to x's. There is now more differentiation between hostile NPC and friendly NPCs. For one, 'friendly' (neutral?) NPCs are now blue. Also NPCs are colored in while players are hollow. The colors have also been run through color blind filters. Give feedback. I took some shots from the test server. 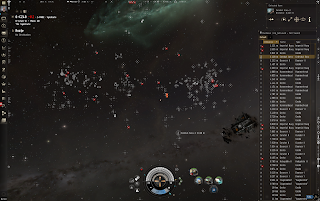 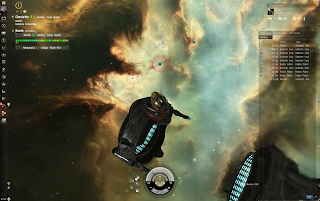 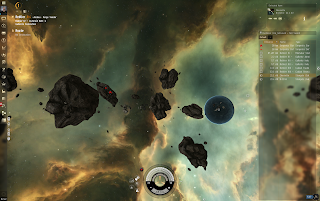 And now onto fleet warp. CCP Larrikin wrote a dev blog updating fleet warp. The changes are being moved back to august and more broadcast abilities are being added. You will be able to broadcast to bookmarks, mission locations, fleet members, and everything you currently can. This is a new feedback thread. I was told that some people may not know that there is a new thread or changes have happened. Please chime in on these changes.

Missile Changes: CCP Rise has adjusted the missile modules some.  CCP fozzie posted about hitpoint adjustments. The feedback that I have gotten on the missile module tweak has been negative. I've been told that the new changes cause missiles to be no more interesting then they were before and not worth replacing a gunboat. I'm not a missile user so I need your feedback, thoughts, and reasons on this.

The Hecate: CCP Fozzie posted the stats for the Hecate last sunday night, after I had written my post. The Hecate is the last of the 4 T3 destroyers. It is a gunboat and not a droneboat as some would have liked. Yay or nay I don't know. The T3D are not my kind of ship but it will be nice to see the set completed.

I had grand and glorious goals to hold talks tomorrow. I'm going to still try to do so although my schedule has unfortunately been altered a good bit.