Stalling out for a Moment

Snuff has changed its home system for a bit. Maybe forever. I'm not in leadership. That means moving. Ugh. So, I've kind of stalled out because of it.

These days it takes me weeks to get settled and set up somewhere. POS, market orders, moving my things, new bookmarks, moving my alts, resetting up my cyno chains. Plus, I've condensed accounts and one of the inactive accounts as a primary cyno alt. That in itself is not a big deal. I can move another character to take over for her easily enough. Once I started managing my own capitals I started taking the month to train all of my characters into capable cyno ships.

With my general play activity low, moving my stuff is not appealing. With having to move my stuff stocking and restocking isn't appealing. So, I've just gone into a bit of a pause because of it. I'll snap out of it at some point. Mostly, I need to do something a tad bit different then ship spin Sugar for a while.

Today, I decided to be productive. Kinda.

My newbie has been doing opportunities. I quite like the system and find them intuitive and informative. I've had a few minor complaints and found myself in discussion about how much stuff we should give new players.

One problem that Eve has that is not a problem so much as a part of how the game functions, is that the stuff you pick up as a new player isn't necessarily what you should fit and use on your ship. I've complained about this before but I won't let it stop me from doing it again. The lack of smooth progression is what makes Eve appealing and it is one of the things that makes the learning curve a bit rough at first. What you get from the first NPC kills is not what you should be using. The nature of stuff in Eve is that it spawns in particular areas due to who builds what. This however means that a new player who has a very small territory in which they move about it cannot necessarily fit off of the land early in their career. It is a complex question that appears to be easy on the surface and one that I do not have an instant answer for. 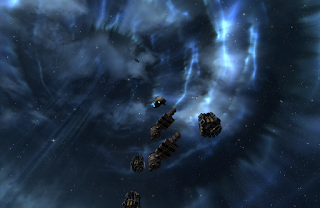 After that, I wandered back to the land of good behavior and took my tower in Sujarento down. Taking down towers is a bit of a pain in the butt. My deep space transported is well loved these days but it does not scoop things in space. My blockade runner is wonderful but its cargo hold means many runs. I wasn't going to take the freighter out and try to slowly wallow from one stack of structures to another.

After about forty minutes of work with Wex we got everything empty and broken down. That left the tower to switch off and unanchor. That is always the last step where I expect someone to steal them. That may be because of the several towers that I have stolen. However, the take down went smoothly and that particular spot of space is scrubbed smooth.

I've always loved the idea of a POS but I do admit I'm not looking forward to putting one back up under the current system. Like others, I have high hopes for the future of structures. It feels both very near and very far as we try to sort things out.

Such has been this Saturday for Eve and I. I've been working on my blueprint collection. It's coming along nicely. I'll have to do a mass buying of modules BPCs soon and touch up on my destroyer collection.
May 16, 2015