The Lifecycle of Redemption Strawberry

A year ago, on November 17th, 2013 I stole a Proteus. I wrote the story. 7-2 had deployed to Solitude/Syndicate and I was doing the interceptor thing for our Ishtar fleet. This Proteus derped into us and the pilot ejected, leaving the hull. Being the interceptor in the Ishtar fleet, I got to grab it. Not a single thing on it was expensive. 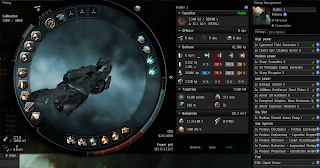 I was fresh with my T3 skills. I had learned them just to learn them having little want to fly T3. I've always loved frigates for their agility. Without a hunger for DPS or an interest in doing top damage, I happily took on the role of tackle. I knew that I had a use in the fleet, my ship was fast, and I utterly enjoyed the game play.

Yesterday, on November 16th, 2014, I lost that stolen Proteus in combat. I was taking damage and decided to be a bit stupid and not warp out when I should have. I might have saved myself. I might not of. I was rather disappointed with my poor decision making in that situation. This would be the second time I've done something really stupid like not leaving when I could have and committing when it was dumb.

I also know it sounds silly to be unhappy in a DPS ship. It may just not be the place for me. I can't say that I find it satisfying like I did being the front line tackle frigate and Snuff does not need me in that way. It is not so much that I want to be important or essential. I need to buy Chella her implants and spend some time doing logistics and see if that is a better fit for me.

I used to believe that skill points where the answer. If I could just get enough of them I'd figure things out. While important, they are not the be all and end all of things. Losing one of my level five subsystems sucked. I cannot say that I enjoyed it nor that I am suddenly in love with T3 for the experience. It hurt less then I expected. I had prepared myself for some huge, jarring sensation and a sense of complete loss and irritation. I did wonder if it was worth it. I guess so?

I have a second Proteus that used to be my BlOps Proteus for 7-2. BlOps are another one of those things that I feel as if I should enjoy and do not. I'll refit that to replace the combat one that I lost. Snuff has a thing for using BlOps Battleships and I don't have a BS to V yet, nor do I have one scheduled for another three or so months.
November 17, 2014