A Look at the History of Expansions - Part Sixteen

A Look at the History of Expansions - Current List

In June, 2008, CCP introduced Eve Online: Empyrean Age. With Empyrean age came the long promised introduction of faction warfare. While this is not the faction warfare that we know in current times, it was a large addition to the game adding a new region, new missions, and a new playstyle to the game.

But it is no longer June and CCP has released the Empyrean Age 1.1 release. Other areas of Eve are also entering their eternal dance. The first CSM is about to end and elections are starting for the second. CCP is locked in their eternal war to combat lag. They have migrated Eve into StacklessIO with notable improvements.

Jita, sweet Jita, how well we know its name. Before the release of stacklessIO, Jita capped out at around eight hundred pilots. Now, it is holding strong at a thousand. However, it still crashed once the population hit 1,400 pilots. Still, CCP is encouraged at improvements. They also had a large fleet battle with 1,100 pilots that lasted for ten minutes before the cluster went down. Eve is allowing larger player groupings then seen elsewhere but it will still take some time and improvements for CCPs visions to take form.

E-ON magazine did an alliance survey. The results are worth reading over. The full summary is here. It is a look into the opinions of Eve Players in 2008. Question number 15 is fascinating considering the time that I write about this piece of history.


15. Do you believe that under current game mechanics 0.0 space could ever be *dominated* by one single entity (an alliance, or coalition of alliances)?


It is followed by question number 14.


14. Real-life always comes first, of course, but which of the following statements would you apply to your main character in EVE?

One of the first, major, Walking in Stations dev blogs is released. Until now, most of the discussion abou this feature was on forums and at Fanfest. However, CCP  Eris Discordia insinuates that proper play testing will start that involves the player base. That WiS will be a great, social event with games and activities for the players. But play testing will be at fanfest only. It spawns a nine page comment thread on the old forums.

If you like the technical, CCP Mindstar gets into detail with how Eve is running under its new StacklessIO structure.


The objective of this continuously-iterating group is not to remove the challenges from the gameplay itself, but rather to ensure that players aren't being held back from addressing those challenges by other things. In this case, an inability to clearly see where a particular skill fits into the greater scheme of things, what it enables, how to get there and where to go next.

It is now October and we are heading into the winter release. CCP is releasing, early, an update that will disable what is known as 'ghost training'. Ghost training is when an account is no longer subscribed to the game but the skill queue continues to accumulate skill points. It spawned a good, healthy two hundred and seven page threadnought. It does feel as if we are moving up to modern times.

Weapons Grouping is about to be introduced and it was spawned as part of CCP's fight against lag.


We didn't stop at the database though, we wanted more, more, more! After looking over the results from our investigations we found several areas where we could potentially get some really nice performance boosts by adding to or changing some game logic. We're not just talking about server-side stuff, our commitment to improving performance is especially important for the EVE client as well.

One such change that we've decided to implement is a new feature we're calling "Weapon Grouping". I won't go into any real detail here as it will be discussed at length in a following blog, however I will tell you that aside from improving performance quite a bit it's also really friggin cool, which is always a plus. It has a nice side-effect of giving players some very cool new options for how they use their weapons.

While this implementation is something that current Eve is familiar with and takes for granted, the initial dev blog is great to read just because of the image of the fitting screen. 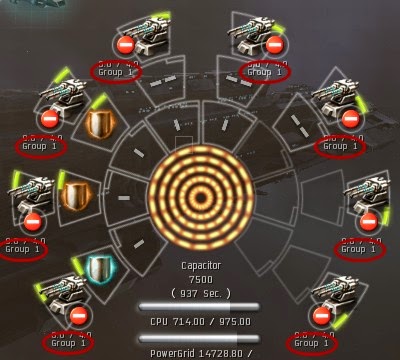 ... and all of the information on a major change that is now an ordinary part of the game.

The quarterly economics report is released. At the same time, CCP, being an Icelandic company is weathering the global finical crisis.

Quantum Rise is about to arrive but it is making very little  noise. The developments for it are based around quality life improvements. But it does bring with it the development and release of the Orca. The Orca fills a need that Eve may or may not have known existed since the creation of the Rorqual.

CCP also starts a competition to go along with Quantum Rise. Whomever gets the most buddy invites gets a new gaming machine. I can only scratch my head at the ways that this could and would and probably was exploited.

To release the pressure that moon goo has on the market, CCP introduces Alchemy. The ability to combine other materials to bypass the most expensive materials is not created to invalidate what is there. It is created to help production continue.

In a way the name blockade runners makes a bit more sense to me. At their inception they were not the cloaking ships that we know of now. But, CCP has added more and more and they have decided to give blockade runners the ability that gives them more sex appeal then a spaceship deserves to have. At the same time deep space transports receive their innate +2 to warp core strength. Imaging ether of these ships without their current bonuses is baffling. What did they do with them before?

Quantum Rise is a technical expansion. Improvements in Eve's physical self as well as technical self and sales are features. It is large but not in the tangible ways that players can touch. Even its expansion page is somewhat quiet in its list of features.

I'd say that Quantum Rise was a rather unremarkable expansion except for two things.

Eve Online: Quantum Rise at the last minute brings us PLEX. The dev blog is released on November 3rd, 2008 that PLEX: Pilots License Extension will become the new way to trade game time codes for Eve Online. CCP worries that it will be immersion breaking. The dev blog is hesitant, worried, and full of justification for the change. I can only chuckle. In this last minute development blog CCP introduces a game changer to Eve Online and the gaming industry all together.

And by the way... the original PLEX could not be put into a noob ship to be lost on the Jita undock. What an unEvelike implementation.