TL;DR: How do we communicate what we understand but cannot define?


I was sitting at Waffle House with my husband explaining to him conceptual problems about communicating with non-Eve players about Eve. He does not play Eve but he is fond enough of me that he is willing to humor me and act as a sounding board about some aspects of the game. He does play video games but he truly a casual gamer and he has no interest in MMOs. He does love sandbox games and he will explore every part of Fallout and wander through GTA for weeks at a time. This makes him a very good sounding board.

Our discussion, over our lunch, was about how can Eve explain itself to new players. I used my favorite analogy of how you start many games and they tell you that you are alone and naked in the world with a loincloth and a stick. Fifteen minutes later you are clubbing wolves to death and eating canine steaks over a campfire wearing rotting wolf hides and feeling pretty good about life. And this is a normal thing, game after game. You are fabulous even when stabbed, bleeding and climbing a sheer cliff wall while people shoot at you.

What that means is that other games set people up to fail in the first few hours or days of Eve. I explained this to my husband and he asked me, "Well why did you make it?"

"Well, I read about Eve as a dangerous place where people could kill you. I read a lot and came in suspicious and cautious expecting the other players to ruin my day. I expected it and therefore I wasn't surprised by it when I bumped into it. In a way, I was looking for it and surprised that it did not happen."

Banners, popups, warnings, they are all suggested but will they actually work? Will new players believe in the same way that they would believe if they read a few blog posts or followed the news stories? The simple, ominous words of the game mean nothing. We've become immune to it. Everything is terrible. It will be vanquished anyway. Next?

If we, as players, needed to communicate and speak with each other, how would we do that in such a way that new players will read and take it in? That was the question that was not answered over lunch.

It was later in the day, as I was playing Space Engineers with the other members of Snuff Box that I had a second idea. Eve is a MMO. Space Engineers is not a MMO. However, there were seven of us from Eve working on projects in Space Engineers that made me think that Eve is not just a MMO it is a cooperative MMO. We spend a lot of time saying that you should get friends and play with other people. However, that is not exactly the hallmark of an MMO.

After all, MMO's are about many people in the game.


A massively multiplayer online game (also called MMO and MMOG) is a multiplayer video game which is capable of supporting large numbers of players simultaneously. By necessity, they are played on the Internet. MMOs usually have at least one persistent world, however some games differ. These games can be found for most network-capable platforms, including the personal computer, video game console, or smartphones and other mobile devices. MMOGs can enable players to cooperate and compete with each other on a large scale, and sometimes to interact meaningfully with people around the world.

Is Eve a MMO or is Eve a cooperative MMO? There are a lot of productive, and successful solo players. I don't think that one has to join a group to do well and Eve. It does make it easier but that is because cooperative efforts create working projects in Eve that people can benefit from as a group.

So, we have this game where terrible things can happen to you and you can lose all of your stuff. However, if you want to work together you can create huge, sweeping complex projects that thrive from social interactions.

What are we actually telling new players? Come join in? Come be alone and live in the world? Come do all of it? By the way you may die or you can try trust and thrive? The message is so mixed. The game itself is mixed. The dystopian future that is Eve's story-line fits terrible into what is going on in the game with how the players interact with each other and their world. Can we look at the huge, massive, complex social contract that has become Sov Null and go, "Wow, what a world barely holding on by threads?"

We've been spending a lot of time trying to define and explain Eve and it may just be that Eve isn't really a defined or explained place anymore. The story of New Eden is not the story of the players. We create and build and thrive and prosper.

So, what are we trying to even say to people who look to try Eve? We sit back and stroke out wallets and chortle over our shiny ships while telling people to beware the harsh environment, would you like some free stuff?

The current task that CCP is undertaking is fixing Eve's core. At the same time, we need to look at fixing Eve's outer shell to. The game is not what it was. The storyline, the world, the ideas and concepts need to be molded back into something that makes sense. And then, maybe then, we can work at figuring out how to prepare people stepping into the world for what the world really is.

I've said before that Minecraft reminds me a lot of Eve. So does Space Engineers. And maybe Eve was just ahead of its time but time has now caught up to it. Eve was born in a time of different game-play focuses and did something new and unique by offering a free flowing rail-free world. Now there are others and maybe dystopian futures may not be the path but instead, creation and destruction fueled by personal choice needs to be looked at more.

Why do I giggle when I'm dying in Minecraft and Space Engineers and not in Eve Online? What's different? What makes the survival mode of these two games fun and frustrating but the survival mode that is Eve Online something that people rage quit about? Or maybe, that simple warning that Eve is survival mode would do it.

Right now we say something along the lines of, "Come play Eve Online but be warned that anyone can harm you and to trust no one except for the group we want you to figure out how to join who will happily help you figure out the game if they don't turn out to be scammers who kill you. Don't worry! The community is great except for the ones you can't trust. Know that loss matters but people may randomly help you while you fight for survival and its everyone for themselves. Hugs and kisses! By the way we have an unoffixal poverty line that so t make sense to.you for a few.months called PLEX. Have fun! Please subscribe!"

I just think we're in a box with glass walls and we need to use a hammer instead of window cleaner to look outside of it.

As for the cooperative tasks in Space Engineers? The Snuffles figured out how the high jack some NPC transports and bring them in for salvaging to create their own projects. I'm thinking a pack of fighters to go take down one of the military transports. 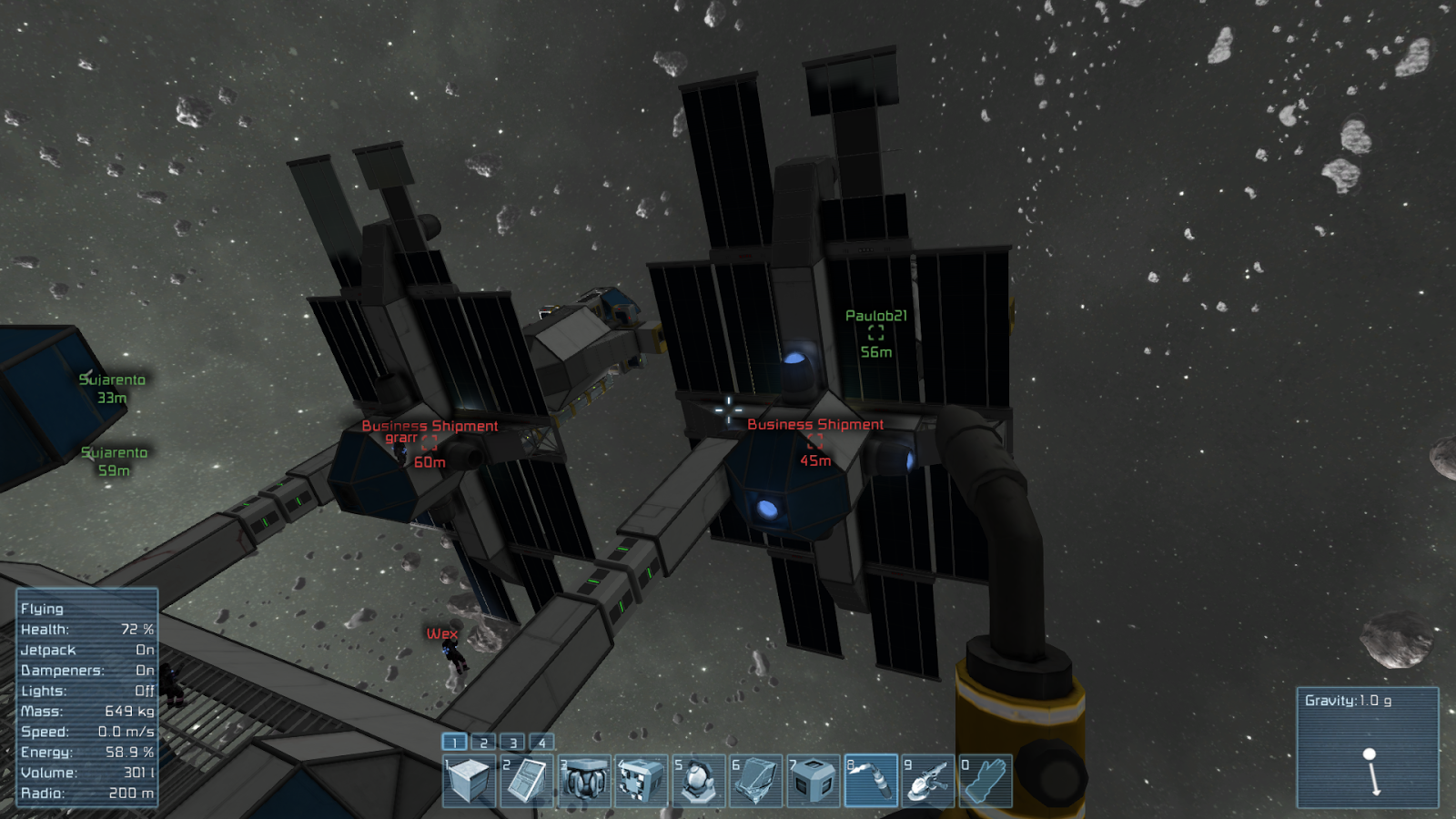