This isn't a battle report. It's just the story of my first Titan kill the first time I took my Revelation out. This is my first week as a member of Snuff Box.

Back in the end of 2012 I decided to try to take down inactive high sec POS to steal the mods. I quickly discovered that this was incredibly boring. However, I had trained a set of perfect Oracle alts with T2 guns for this. A few months later, I decided to use this alt as a level 4 mission pilot. I trained her into Amarr Battleships and set her up to grind level 4 missions.

I never did that. I have a nice, T2 NaPoc all fit out for her to use. I had more fun doing exploration in low sec and just never convinced myself to go to high sec and grind missions.

Sometime later, I started to train her into a Dreadnought so that I could help with the POCO and POS take downs for planning fights. She was a T2 laser user. The jump from T2 Iarge guns to capital lasers was simple. While I was at it, I  trained her into T2 siege and jump skills before I trained dreadnought. I then purchased a fit Revelation.

Also, Revelations are pretty. I have a pretty simple philosophy that if I am buying things I want to enjoy them. "Why not a Moros?" I hear. Because Moros, while being amazing DPS machines, are ugly. Revelations are beautiful. And if it was going to be big, slow, and often static it might as well be pretty to look at. 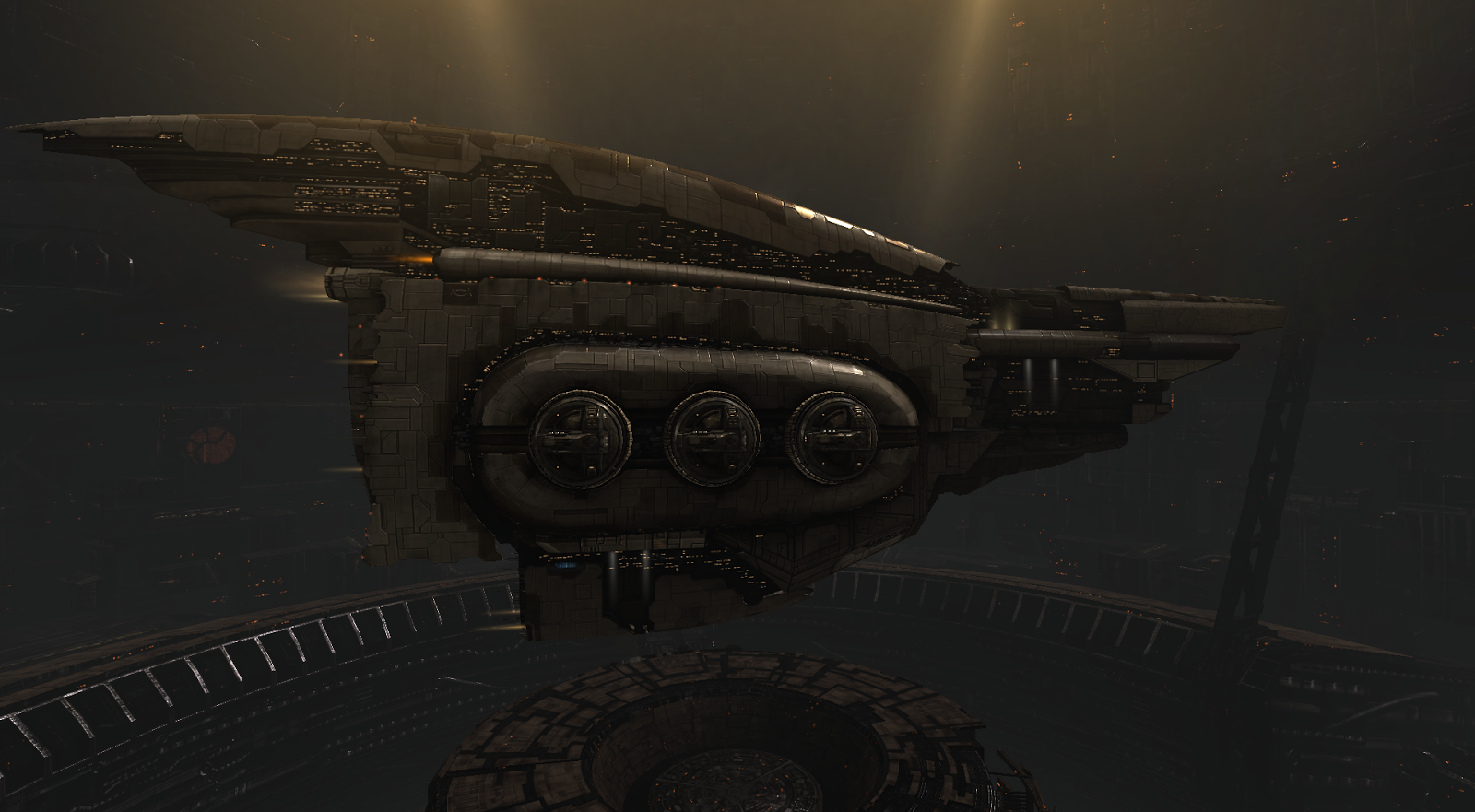 However, I've never used my dread.

Then today... we had just finished a Navy Vexor roam and the news that an Erebus fail jumping a few systems over came in. People scattered to hics (heavy interdiction) and Guardians. I had neither on hand. I just haven't trained Sugar into Hics yet. So there I sat, with a dread available but no experience. It was one of those moments when everything told me to just wait it out for the next time.

And then as they called for dreads I decided that I might as well go for it. Even if I messed up, at least I tried. I had enough stront, I topped up my fuel, I joined fleet and the command to jump went up. The HICs pointed the Erebus and I frantically undocked as the dreads jumped in.  Then the cyno went down and then two more went up. I took a leap of faith and figured both were on the field and well, I’d not get this chance again. 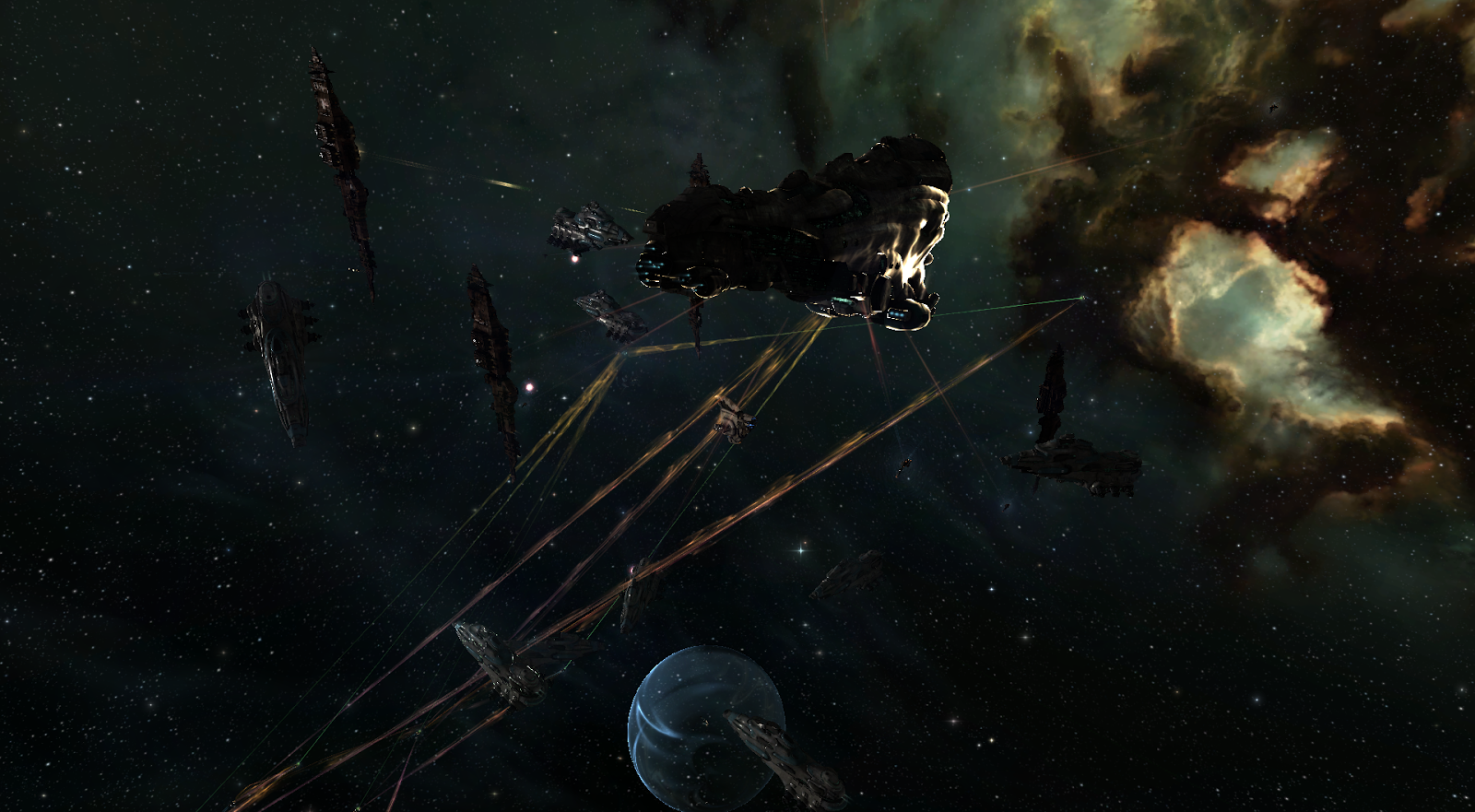 I locked up the target, shot, remembered that I should siege, didn't remember hearing the seige command, looked at the other's and saw they were sieged and pressed the button. Then I had to lock it up again. Learning on the job. 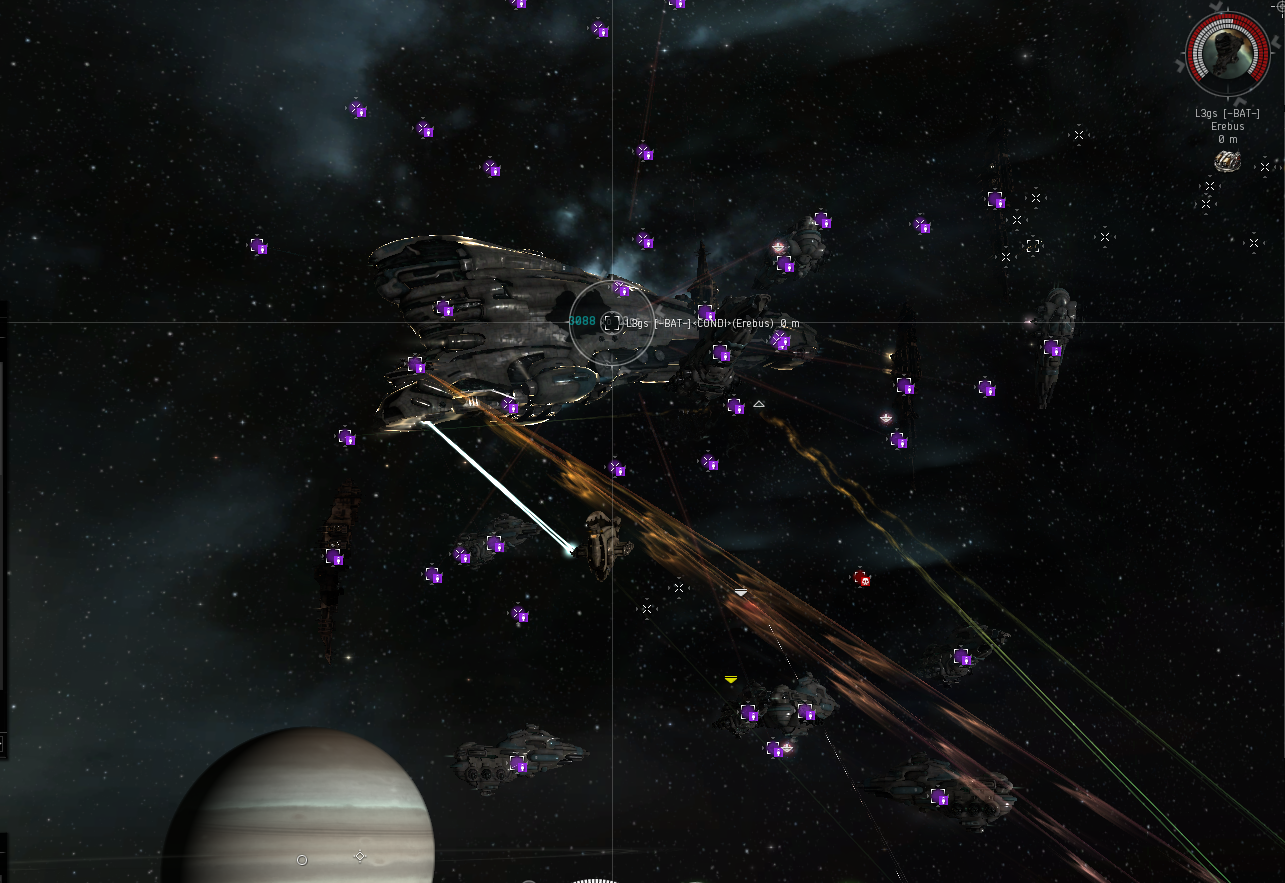 I shot it. People were warping in to assist. Everyone knew what they were doing. Pings were flying. The fleet was morphing as the people who had given the original intelligence arrived. More dreads were arriving and there I was, sitting there going, “Eep! What am I doing? Hope this is the right thing.” As the Erebus was dying. 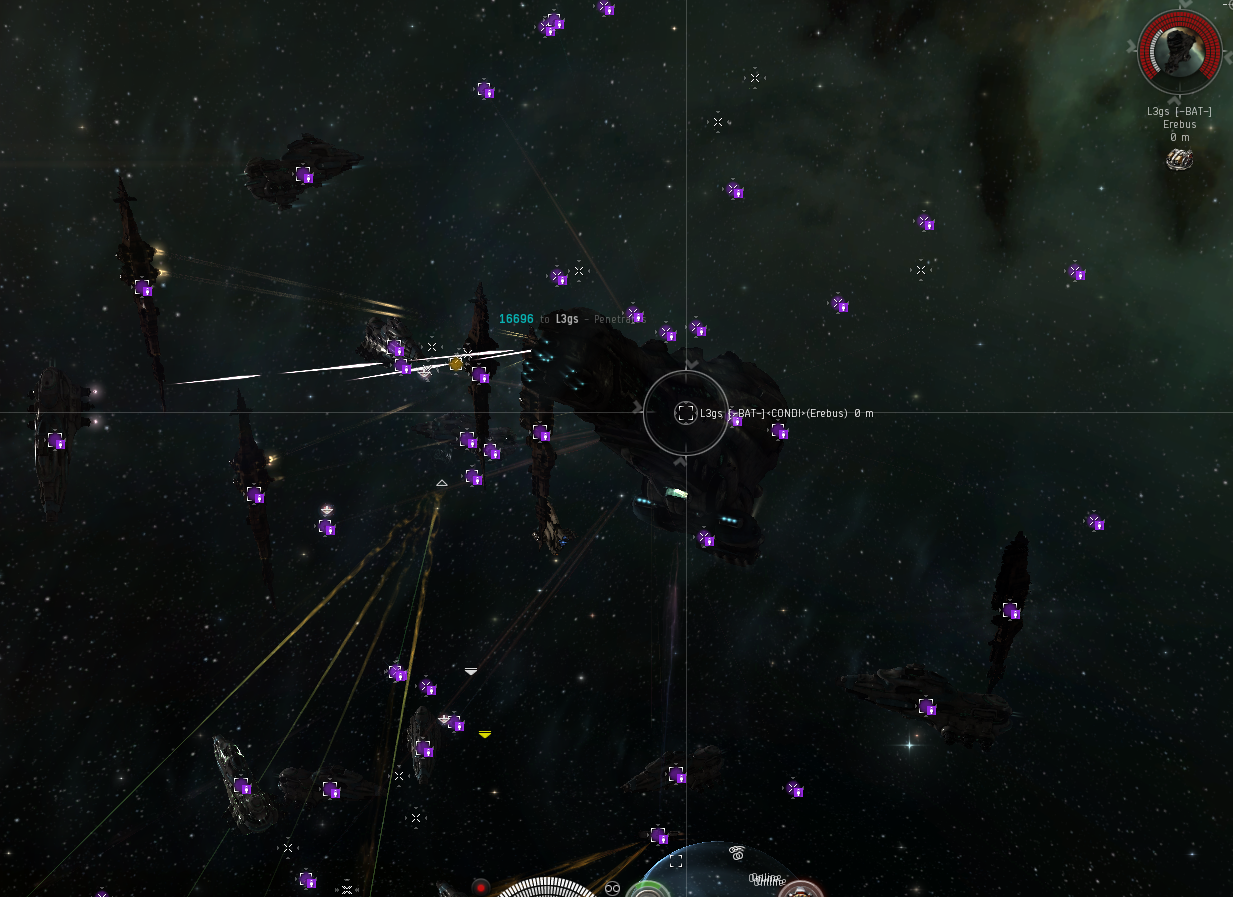 With it in structure I sieged red. People were arriving and I'm sitting there just shooting this thing, shocked that I was there. My dread pilots overview was a mess as well, and I'm trying to sort things out, and take pictures, and I realized that I was okay if I lost it. I had jumped in to help. I was helping. I had helped. 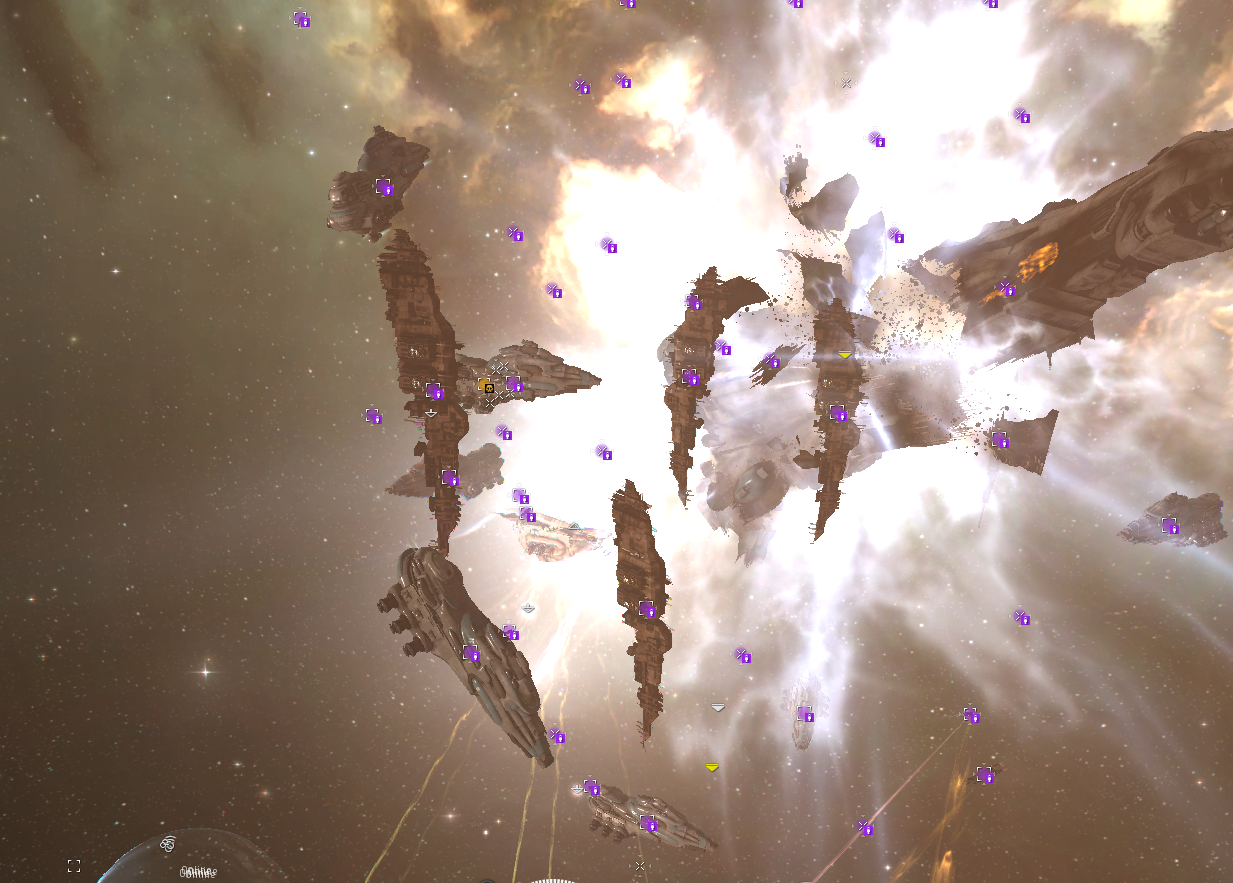 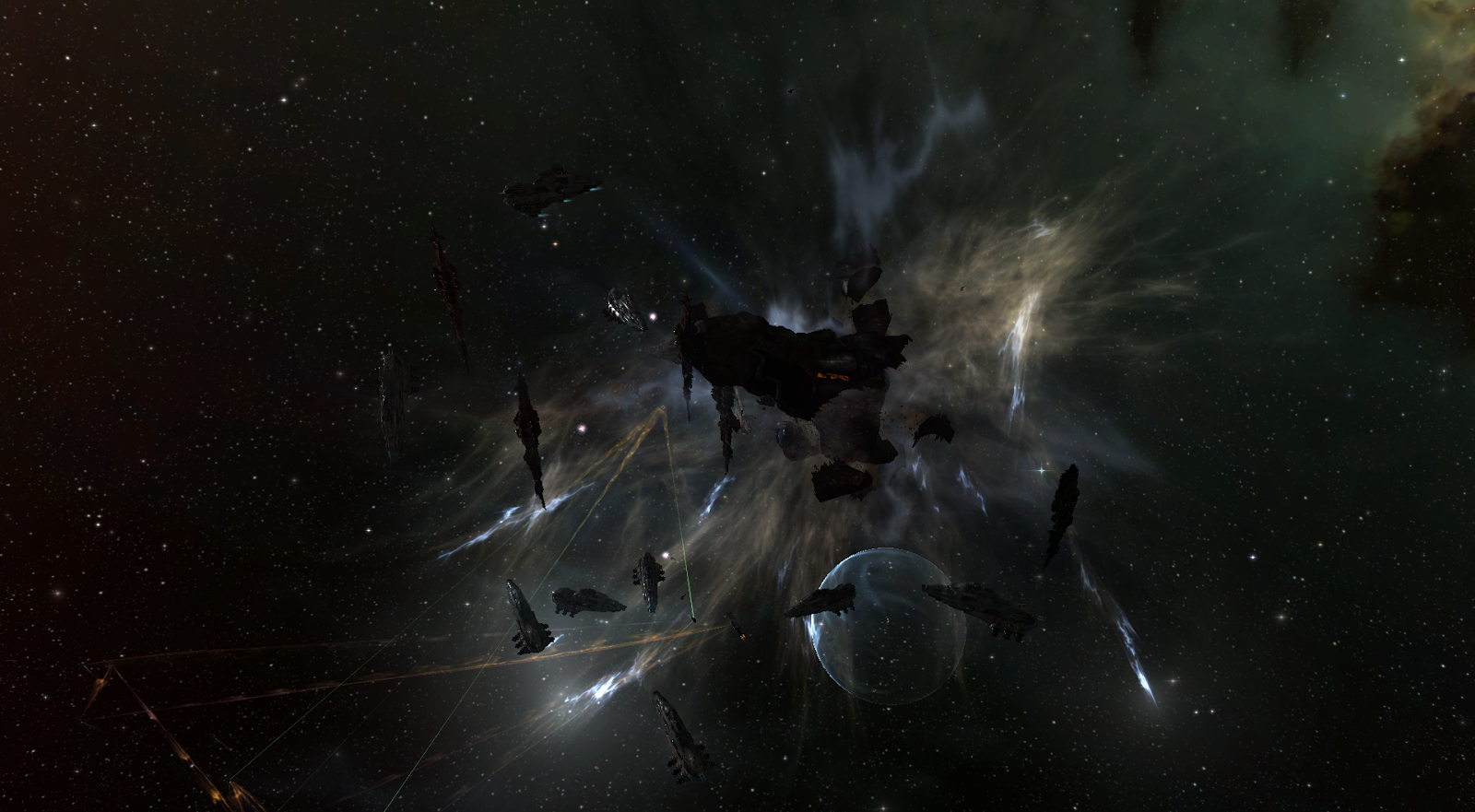 The wreck vanished. However, our hics and a close Naglfar had already looted the wreck. I slid out of seige and remembered about jump cap when I tried to jump out. I've heard dozens of times ‘are you at jump cap’. Now I sat there, consuming boosters and broadcasting for cap wondering if I would die as more people appeared. A Titan kill had gone down and that is blood in the water of low sec. One by one the dreads were jumped out and I spammed jump over and over until that beautiful, “Jumping” notification came up.

Back in Sujarento. It was about fifteen minutes from first ping to kill a Titan to my docking back up with the Titan down.

I docked and shook for a bit. I was stunned that I made it. The killmail had not shown up and someone asked if I had checked my dread alt. I said, "No." After all, I never get final blows and she is my dread alt. Well... 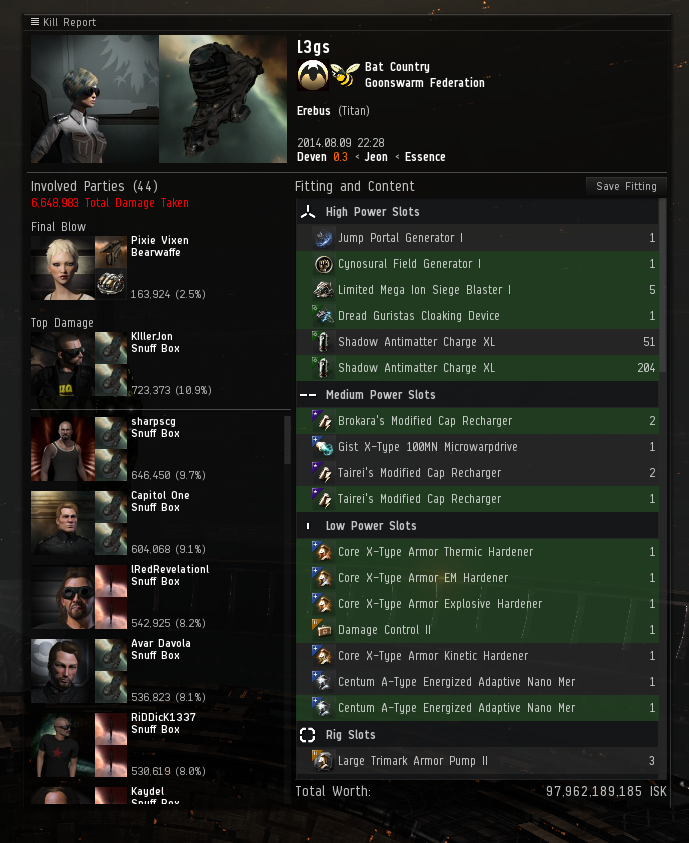 That is me. Oh. Wow. Final blow on a Titan kill. I said in a little shocked voice, “I have it,” and dropped the killmail into fleet.

The fall out was interesting. People said I should contact Gevlon to see if he was willing to pay a bounty on it. I got contacted on my dread pilot by Eve News. I told them that I'd do a write up. It seems that the Titan was stolen from -A- a few months ago. It is interesting how these things go. The killmail was posted everywhere. Comments are already flying.

A random mail was sent to a member of the fleet.

But for me… this is the story of my first Titan kill and dreadnought op all wrapped up in one. I jumped out of my comfort zone. And that is what playing Eve is often about. Still, I am shocked. The guys are comparing DPS done. I don’t care. I’ve never cared if I got top damage, middle damage, or whatever. I was there. I participated. And that was more than enough for me.