A Day in Space

It started the night before when I found myself in an Ishtar in null sec.

"That's why we fly Ishtars. We can't afford ammo," was Floyde's deadpan response when I was teasing (myself included) about our PvE. KD had asked if anyone wanted to do some Besieged sites and I had turned Vov down on a twisted wormhole journey to a 5/10 only to assist Floyde and Robinton on a 10/10 in null sec.

The state of low sec has been good. All of the new exploration sites and wormholes are downright intoxicating. Where huge swaths of space would be empty and you'd jump into a system and sigh, now we're slamming face first into stuff.

The corporation has started to use Siggy. These are wormhole mapping programs that we are now using to chart pathways using the increased k-space to k-space wormholes that were introduced with Kronos. This now means that four jumps can land you in a back end region halfway through Minmatar space to run a 5/10 complex instead of running the same old same old in the backyard. We are not going through wormhole space we are just using wormholes instead of gates. It's a lot of fun.

When I got up today I decided to go to Istodard and pull the dust cover off of my Legion. That ugly beast that I created so long ago has sat, unused, for a year when I walked away from exploration after Odyssey. The scatter containers are gone and there are lots of interesting sites out there. I've been wanting to find faction POS mods for instance so it seems like I should go and give it a try. And how rusty I was. How unfamiliar I am with things that were once second nature.

But this is Eve and we have chores. I switched out my POs reactions and dumped my silos. That done I waded into the depths of our pocket to shake the dust off.

I found my first ghost site. I was a bit worried after randomly slamming my Cynabal into a besieged site and almost dying until Altaen and Kenrin came and saved me. I was nervous because I know they blow up. However, my Legion was good for it. Four cans and an unknown amount of time. I microwarped to the first one and frantically burned through the hacking game. Thirty five shattered villard wheels as a reward. I was excited. On my way to the next can rats warped in. I said on coms, "This means its going to blow up doesn't it?"

"Oh." I made it all the way to the node for the last can before "Hacking Failed" and everything exploded. I was fine. A bit of shield damage. I had put on my armor repper just in case. I wound up with a bunch of shattered villard wheels. Those are selling nicely. I looked sadly at the empty grid where four more cans had once lived and warped off. I wound up selling them to Kaeda who needed them to build a blue print copy from a site he had run earlier.

After that, I decided to do what I meant to do when I first built my legion. I unloaded my spoils and ran off to Great Wildlands and started exploring. Over the course of the day I worked my way through most of the system and then decided to descend even deeper into null sec and work my way through Scalding Pass, Sov Null for Northern Associates. and a few chunks of Northern Coalition. 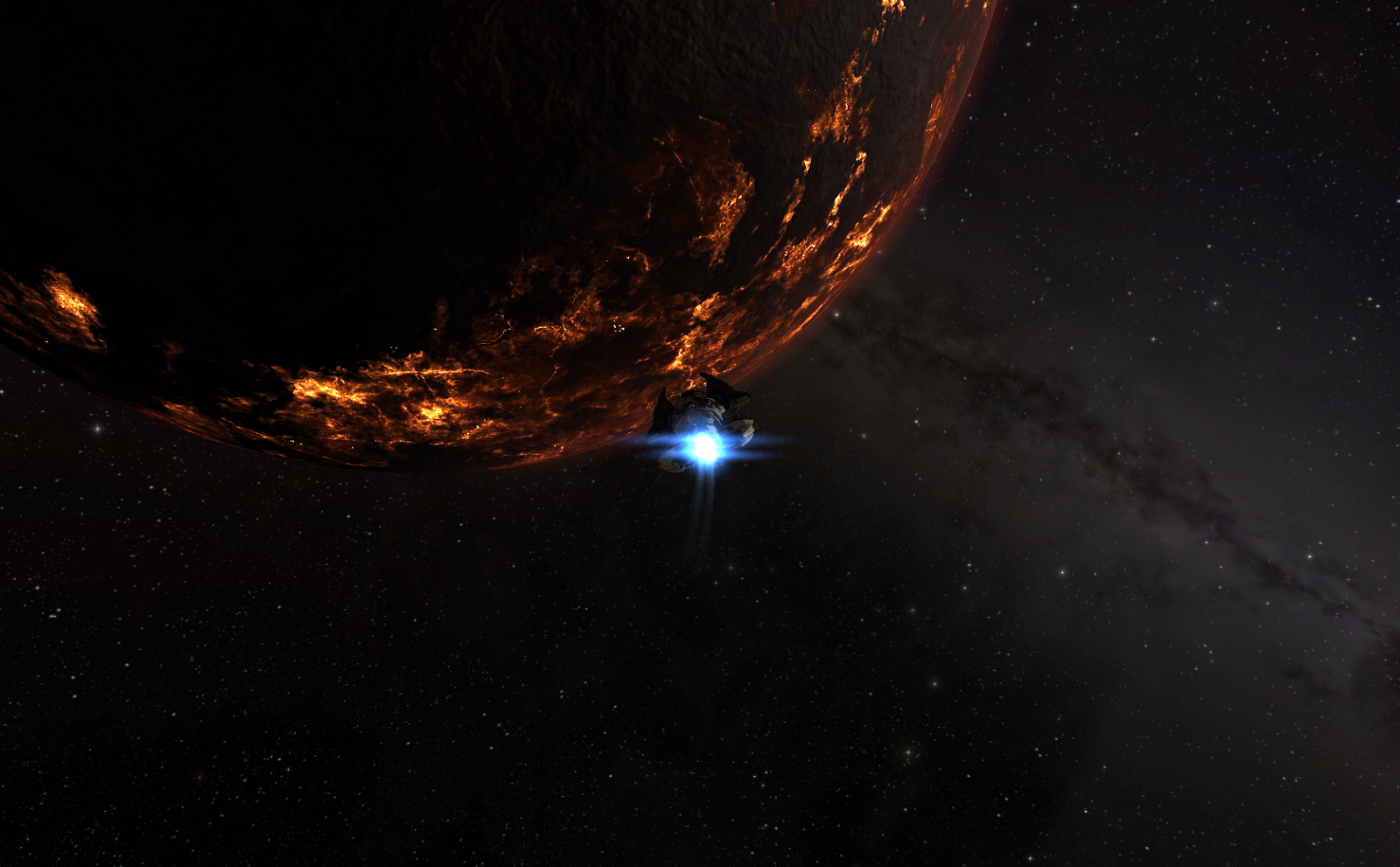 I kept finding pools of humanity. In NPC null there would be random systems with a tower around which huddled many, many ships. Sometimes there were a handful of players moving through but it was quiet. Eerily quiet if I compared it to my mining alt whose local was a steady stream of chatter. I found relic sites and one data site as well as another ghost site in my wanderings. I avoided populated systems and I came to realize that my Legion setup needed to change.

This is my original legion back from when Relic and Data sites had NPCs in them. Now I need something to make the hacking game out in null sec better. I've lost a few cans and my skills are maxed. Slowly I accumulated a cargo hold of goodies slurped out of the scattered sites that I found. 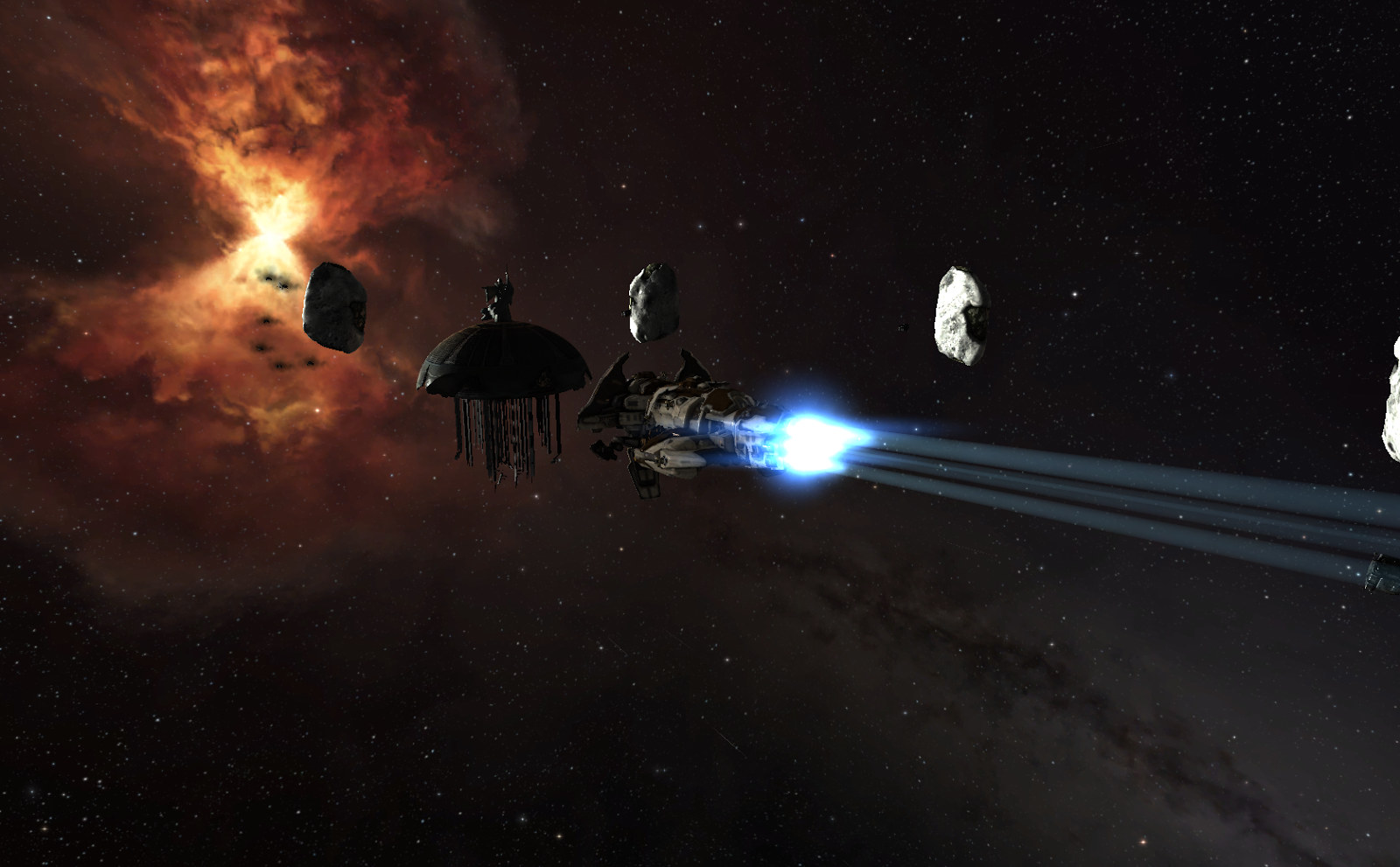 I did stop to undock Sugar and assist in a fight. I've developed habits to make safe spots off the beaten paths. There is no sitting cloaked at the sun at zero for me. I had very little fear. My Legion is cloaked and nullified. I slipped through the occasional bubbled gate and slunk into the depths of space, puzzled by the occasional silent faces in local. I did not worry about loss. This ship has paid for itself time and time again. It is simply fit for the task of exploration.

And so I wandered deeper. Further than I ever have alone. I swept into Wicked Creek and slipped through the lands of The Unthinkables. And I was alone. Yet, I was excited. I had planned to do this so long ago and I never had. I had fears of null that held me back and now they were gone. Or, maybe it was just personal growth that I had not noticed. Yet, I did not long to dock at home. Eventually, I logged out in space. I was to far to burn back home and things were going on in Molden Heath. Priorities.

And thus my day full of Eve ended with a fight in classic small gsnh warfare I do enjoy (the falcon was not ours). my mighty Throax was brilliant as it died. And I realized that I was so rusty I forgot to deploy my drones. Whoops. But I felt good. Good fights in local and a trip back home in my pod.

I may need some oiling. Nothing a few more fleets won't smooth out. All in all it was a good day out in space.