Rambling:There is No Carrot nor Enough Stick

In Minecraft there is a item called a carrot on a stick. This item was originally used to ride pigs as a method of transportation. You made a fishing rod, put a carrot onto it, tossed a saddle onto a pig and off you went. There was some convenience to it but mostly it was amusing. The pig would go anywhere the carrot on the stick pointed, following it without looking where it is going. If you take that pig over a high enough ledge you earn an achievement, "When pigs fly." The pig doesn't fly. It just blindly follows the carrot.

Sticks have an interesting place. They are used to hold the carrot out. The stick is the push and the carrot a lure. When one becomes frustrated at ones Mminecraft pig, the stick can be used to beat the pig to death. There is no motivation other than receiving a pork chop (which is a lot of motivation for some).


The "carrot and stick" approach (also "carrot or stick approach") is an idiom that refers to a policy of offering a combination of rewards and punishment to induce behaviors.

In Eve the carrot and the stick translate, roughly, into nerf and buff. However, they do not translate cleanly. To nerf or buff a ship or ability to rebalance the game is a completely different act than to nerf or buff an activity or aspect of the game with an intent to more players to or from an area.

One reason I have not worried about the fears to move people out of high sec into other parts of the game is because people will not move. There is no carrot nor enough stick to make them do something as huge as moving in the game. Even nerfs just cause people to double down and figure out new methods that fall inside of their perceived tastes.

When I started writing this I was thinking about the worries people have that CCP is trying to chase them to null sec. I don't find this to be the case. The shift of balance may not be appreciated but I don't think it is a direct drive to push the people currently doing things to null sec. It is instead a motivator to get the people currently there to actually do things. I the middle of that some people will choose to jump ship in ether direction. Some to null sec and others onto the 'screw' this train because being nerfed sucks.

"Sugar, moar people in low sec please!" often translates into more targets or fights. "I don't want low sec to be cluttered!" is the other argument. Nor do I but we really, really do want someone to be here. How does that happen? Many aspects of Eve now cannot be picked up in low sec and moved in a viable method. Let me show you a chart from 2012 that may help to explain this. 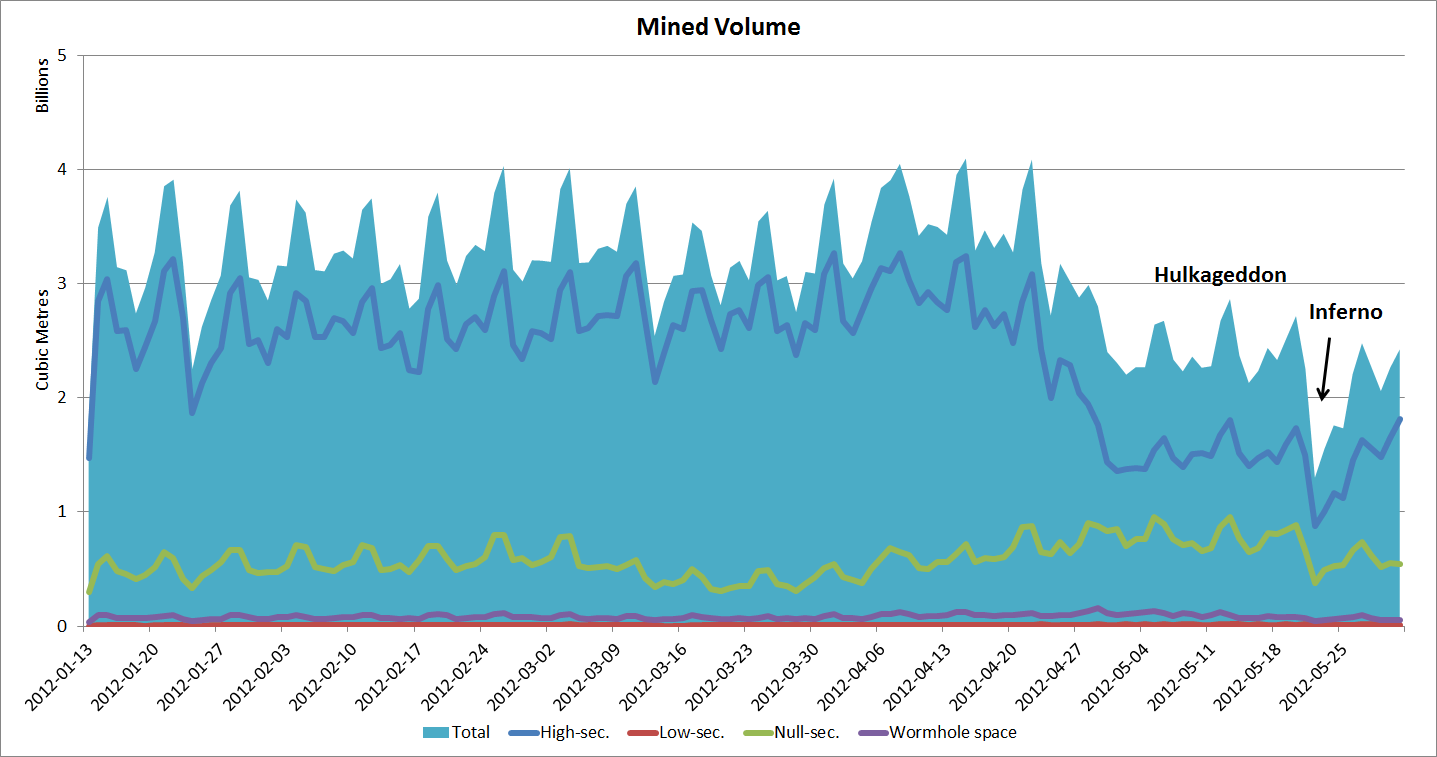 This chart is from a dev blog after the release of inferno that discuses the barge changes. I don't actually care about the bulk of the chart for this particular post. What I care about is the bottom. If you look at the bottom of a chart there is a red line. That is not trim. That is how much of the games minerals were mined in low sec. This chart has not gotten any better and if anything it has only gotten worse with the battlecruiser nerf, the cruiser buff, and the rise of interceptor gangs.

And that is fine. What I am hopefully saying is that no amount of carrot or stick will get people into low sec as they currently play Eve. We will not be transporting great mining fleets to comp placidly through the belts of Molden Heath. Not for more than a few days at least.

And that is okay.

That is why I am excited about the Mordu's Legion and the new ship skins. I'm excited for non-microtransaction ship skins. I am more excited that they will be in randomly spawning low sec content. The same goes for Mordu's legion ships. I can't even fly them properly because I have no missile skills. But they will be available in low sec in such a way that people will have to go out looking for that. That means people are out in space, hunting for things that will fill their bellies with ISK. They are moving, scanning, aware, hunter and hunted. And that is the low sec that I want to see.

I want to see one where people decide to come in and do things. Not all of them will stay. In the carrot and stick methodology, the goal is to keep people in low sec by giving them a way to do what they currently do elsewhere. Instead, I want people who are interested in being in low sec and living off of options that give them a chance to succeed and a chance to fail.

Brando and I were discussing the industry changes. We'll be testing them heavily and our hope is that viable building can happen in low. I was talking to Altaen about transporting goods and he suggested deep space transports get a ship hanger that lets them move a fit cruiser or two after he asked. That question was spawned after I explained that I want people to be able to productively move around in low sec without so much inconvenience that its soul shattering (dozens of blockade runner trips to fill a POS) or higher end game play (jump freighters are expensive and need a specialized set of accounts).

I think for the industry changes to spawn something (and what that something is I don't know) to change low sec it will have to be a thoughtful combo of industrial changes along reasonably obtainable by the average player logistic possibilities. It will have to be something that someone who is self motivated will say, "Hey! I think I can do that."

I think I am starting to create my definition of low sec.