Tacks in the Timeline

"I think at that point its safe to presume that said person personifies said organization's ideals, values and culture," said Dirty Protagonist also known as 7-2's CEO.
"Be careful DP before someone sees 7-2 as cuddly, tickling, bloggers," I commented in return.

We recently closed recruiting for a bit after getting a handful of interesting and diverse people apply to the corporation. Some have gotten in, some withdrew, and some have been declined. I find the declines the hardest. It is a hard decision. We're here to play and have fun but that decision to not enroll someone at a specific time, for the various reasons that comes along with it, is an important too. Unpleasant, perhaps, but important.

Every character in Eve has a corporation history. That corporation history is a semi-readable look into that players activities. Do they go inactive for months at a time? Do they never stay with a corporation for more than a few weeks? Do they have a habit of going for a particular type of corporation? Some people never settle into an Eve home and some people (such as myself) hit one almost from the start.

My own corporation history is very short. I've been in 3 corporations that where not self created corporations. I was in THC2 for a year and a half and I have been with 7-2 since I left THC. That has now been nine months. If one where to incorporate the personal history of the killboard they will see that I have been entwined with 7-2 since its creation and the change from THC2 to 7-2 would not be a surprising one. 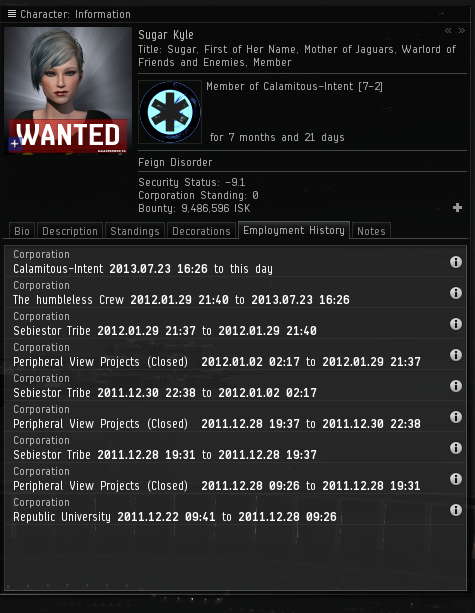 I cannot run nor hide from these choices that I have made. I happen not to want to, but that is not the same for everyone. Many enter the game and try things out only to find themselves trapped by decisions they did not know they were making. There are people who will never be able to apply for a corporation or alliance because they once were part of another corporation or alliance. This has an interesting side effect when mixed with time. Groups change. This in fact happened to us when Rise of Legion changed ownership and the group we were fighting last year and the group that wandered back into the area six months later were no longer the same.

But, so often people are judged by their current corporation or previous corporation history. It is an understandable if unfortunate consequence to this socially powered game. Eve has a solid history of people with certain play styles exhibiting certain behaviors. There are corporations known for their behaviors and actions and people react off of them. I'm no saint on this aspect when it comes to groups that I have had bad interactions with in the past. But, I am not my group even though I am my group. When someone challenges me that I am one thing because they believe 7-2 is that thing I can attempt to counter but it will be their choice if they wish to see beyond the corporation ticker.

That is one reason we fly with people who apply. The application process in 7-2 is similar in that respects to THC2. While 7-2 has an actual application that is gone over, criticized, trolled, or swooned over, it is only one part of the process. "Come fly with us," is the most important part. No matter how good someone is on paper, in words, or while hanging out, if we cannot get along in space we cannot function as a corporation. That is how this corporation works and it will not be the same for every group out there. But, it works for us. At the most someone might try to spy to awox a capital fleet. That amuses me. We manage to kill our big toys quite well on our own.

For some people, that requirement of 'fly with us for a while' is to ambiguous. They applied and they want a yes or a no. We cannot give that to them. While at times, disappointing, the outcome is a higher probability that everyone will mesh. I remind myself of this when I hear people rejected for previous alliances. There are some, I am sure, who would reject me for my past in the game. With cultures come stereotypes. It is up to each to decide what they can or cannot live with or without. The longer I play the more I come to understand the importance of some form of internal harmony in corporation, alliance, or coalition.  In a perfect world ones past would be forgiven. But this internet world of ours is no more perfect than the reality that we escape.