I have this idea that I need to go around and do a few more things in game. It is so easy to say, "Naw, don't wanna." But, I think that isn't what I need to be doing right now. These things don't have to become my day to day but they are popular activities that I have never engaged upon. It isn't the first time I've crawled out of my comfort zone. Such as when I decided to do my incursion experiment when Chella first reached Logi V. But, it was Roigon who suggested going on RvB Ganked 103. It was focused towards Rifter hulls which included Wolves and Jaguars. Well, damn. Jaguar focused. No excuses outside of 'being at work' or 'on vacation' carries enough weight to turn down a roam where I can legitimately Jaguar. Tidi, Frigates balls, new people, and new things. My main desire is to be quiet but I figured I should try to be social and say hi to people. It is a public roam after all. I spoke up and I didn't implode, so it was okay. A few of the people that visit my chat were also going and Siuil managed to convince someone he had killed to come as well. Also, Roigon who is a vet at these things. I figure, I might as well have a security blanket of familiarity.

Vov knows me so well.

I had headed to Assah (the rally point for outlaws) a bit after I woke up. The shortest path was 26 jumps through high sec. I decided to start early, in case I died. That means I was all ready when things started. I had downloaded and setup mumble, read about the roams, and tried to settle myself. I joined coms, spoke up a bit and tried to settle in as the fleet warmed up.

RvB engaged war targets on the Rens undock as we waited. Once 2000 hit they headed out and picked up the low sec contingent. Never having flown with 150 assault frigates watching the first targets vaporize before the bulk of the fleet even locked was fascinating.

After that, we dove down into null sec. We chased some things and took some smaller fights. We lost about thirty ships to a bomber run while chasing one of those fleets. One of the people said, "I now understand how all those thousands of people I've bombed felt." I managed to jump through but our newbie died. Just past that, we chased a fleet that turned into a bigger fleet and turned into an even bigger fleet that we powered through for a bit and finally succumbed to the sheer amount of logistics on grid (word says 10-12).

I died and was podded. I was puttering my way out of the bubble when someone noticed me. The rest of the fleet disengaged. With the night being young people reshipped and rallied. I switched ships and trundled the thirty some jumps back to meet up with the fleet and go back out.

This time, we made it through the bomber fleet. Our newbie, who has never been out in a PvP fleet before landed a final blow and claimed his first killmail. This, directly after making it through the bombing run in his reshipment. He had even put together a second ship to reship into in case he died. So proud of him! We had two really good fights with what seemed mostly to be NC. First in a cruiser gang and then against an interceptor pack. Real fights with skirmishing and warp ins and outs with losses on both sides as we tried to gain tactical advantage. It was a true pleasure when we finally disengaged, both groups worn down and fragmented apart.

After that, we stumbled across a Caracal fleet and dove into that. We had been bleeding away members but we were still at ninety something strong. I've never been in a fleet that large and the massive, purple ball fascinated me to no end. It created a rolling ball of TiDi with it, causing extended warp tunnels and us losing the advantage on tackling a fleet we were chasing at one point. 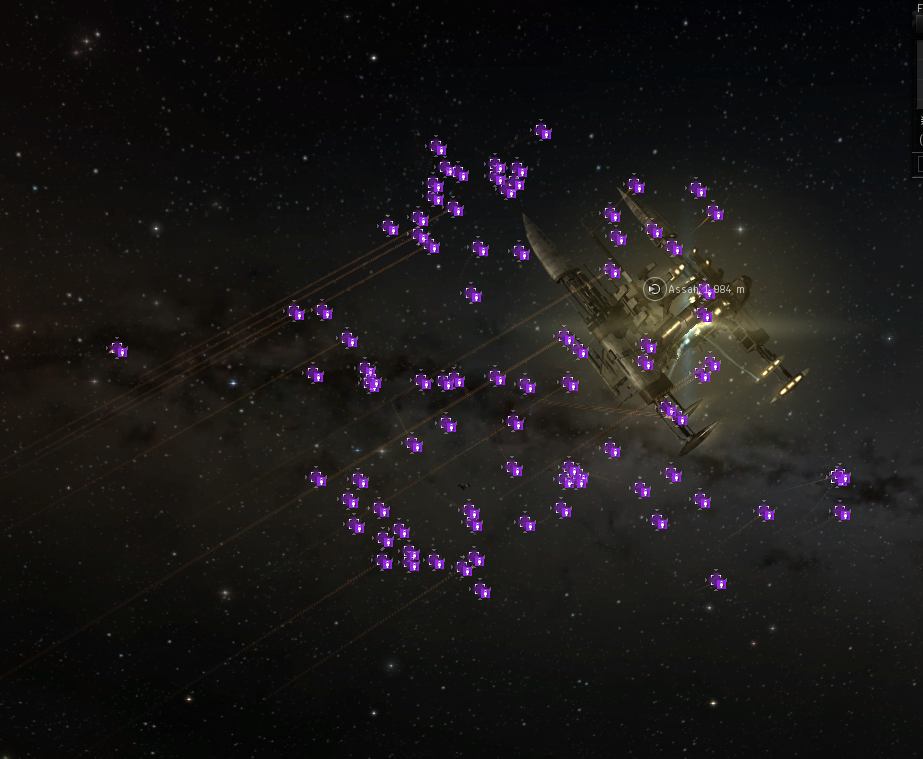 My main reflection: I didn't expect it to be as long as it was. Things were well organized. Often I wasn't sure who was doing what with what scouts and if it was jump or wait but that I just stumbled through. There was a lot of people and a lot of information flowing. I just didn't want to derp. At three and a half hours my neck was sore and they were looking for another ratting pocket to look at. I realized that I am somewhat used to a set time for roams and three hours was pushing my limits. In my mind I had assumed it would be two or so hours. I had zero reason to make that decision, it just was about what I am used to. Therefore, it made sense. As hour four loomed I needed to go do other things. I said goodbye and peeled off to go home.

I expected to die but I slipped out of null sec without a problem. I then ran the thirty odd jumps back to our staging system and collapsed in a puddle. They went on for another two hours I believe. I got dinner, drank some water, and well... was exhausted. It was a good experience and one I can see doing again. I will just make sure to preset how long I will give to it instead of expecting the roam to end.

Mission accomplished with a bonus of not bursting into flames of embarrassment.