In the Defense of the State

All bundled up in the war zone I unpacked my ships and started to fit them. My newbie makes me grin. I picked up meta items here and there but I left her fits very cheap. I have decided that it is time to learn missiles. I hugged the mail that Naoru sent me with his missile lists (it is also my stocking list) and stalked Kaeda and Wex for loss mails. I needed warzone fits. Not Jaguars. Not cruisers. T1 missile boats that would burst into flame under gateguns.

I learned, that being a newbie is hard. I needed skills. All the lovely fits that I had, I could not fly. I do not mean that I could not fly them in reference to the T2 fits. I was going to drop down to T1 and cheap meta gear. While I might not be effective, I would be properly fit. No, I learned that I couldn't not fit things.

Capacitors management, I needed that. Rigs? I couldn't use a single one. Oh, Jury Rigging 3 is going to be another eight hours from now. Okay, I'm all set? Guess who cannot use Micro Auxiliary Units. No worries, Astronomics is only another twenty minutes away. Keep at it. My entire first day was sunk into just getting into my ships. I was tempted, horrible tempted, to undock in something not fully fit. I bit back the exasperation that caused such blasphemy to bubble up into my mind and I plugged in skillbook after skillbook.

Let me admit my next hiccup. I fit the wrong launcher onto my ship. I was so frazzled trying to get things to work that I didn't realize until I tried to load rockets into a light missile launcher what I had done. Sigh and back to the station. I refit and undocked and went back to the warzone for the very first time.

That was when I realized I didn't have my overview together. I warped to a planet, aligned off, and spent some time putting that into a better state. From there, I went to my first Novice Plex. Now, for those who do this every day it is an old game btu for me it is very new to do it from this side. I know to warp to 10k but beyond that, I was going all in.

Missiles loaded and guns blazing I burned in and chased down the NPC and killed it. It involved changing ammo and using my web but I was up to this task. I killed it eventually and started orbiting the structure and clicking dscan nonstop. I wasn't going to run, I was going to fight when it came down to it. An Enyo on scan... is it coming for me? Enyo off scan... ahh yes Novice plex T1 only. I'm a true novice at this but oh how the anticipation was starting to burn. Someone would eventually try to come kill me.

I tapped dscan and read Militia chat and watched my timer go down until, boosh! Captured that beacon I did!

In recognition of your effort to secure our strategic facility in the contested system of Ishomilken, State Protectorate grants you 733 loyalty points.

I did another Novice and watched the ships buzz across the system. From there I headed to the next gate and into a whole new world. With only one other person in system and nothing on scan I decided to be bold and take out the small complex. Look at me moving on up in the world. The timer went from 8 mintes to a bit more. The destroyer was tough for my newbieness. When I proudly told Wex what I had done he explained to me that I was hurting my faction standing by killing the NPCs because they were friendly. Friendly NCPs? I was ashamed. My bloodlust for red crosses had blinded me. My piratical roots were showing through.

With my eye to the map I skimmed in closer until I was two jumps outside of the front line (at least thats what I think it is) and saw an orange star in local. It was on! I warped to a Novice plex and started to orbit my heart out. This was one plex that would be defended.

And, after a few minutes, in warped a Federation Navy Comet. Orange star! Enemy in sight! Holy shit. It's on. This is me. All alone with battle at my feet. Honorable solo faction warfare combat to protect my plex was happening and it was happening now!

I locked up the Comet and burned for him. In the back of my mind I decided that he was probably going to be a blaster boat. I set an orbit at 10k and discovered rockets are not exactly projectiles. I pointed, webbed, and damped him. I also forgot scripts. Whoops. I then tightened my orbit and began to kite in and out beating him with my Caldari Navy Inferno Rockets. I chewed apart his shield and hit armor and almost nothing happened. He was landing an occasional hit as I nursed my MWD for cap. At some point I ran out of rockets and had to reload. I was down to 35% armor when I decided that I might as well regain some and make him work for the kill.  This Novice Plex would not fall! 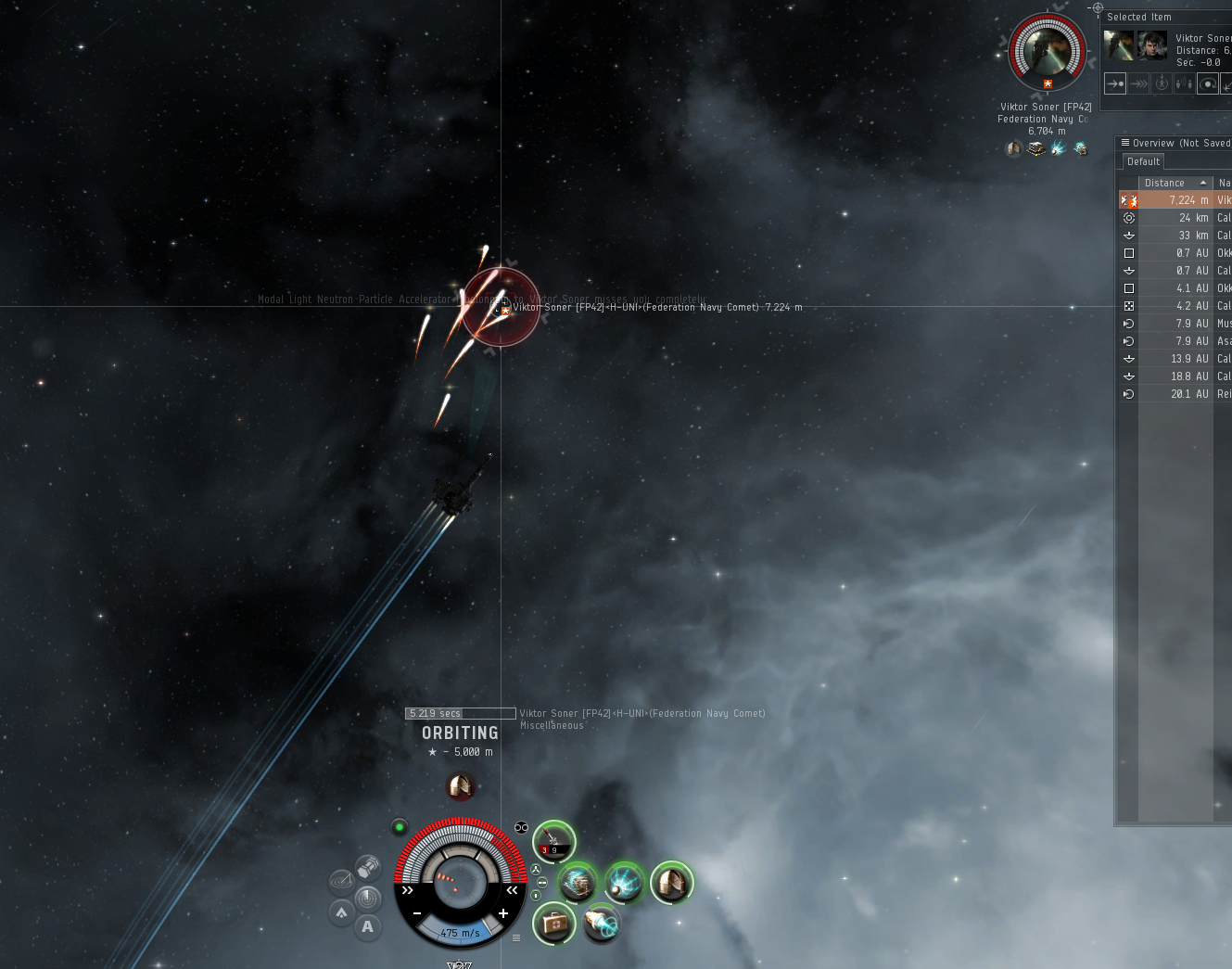 I kited out to 15k and did a lazy orbit as I held a point on him and waited for my shields to regen. He was crated in December of 2013. A few months older than I was and probably better prepared. I bet he did not finish Capacitor Management II this morning to fit his a Micro Aux like I did. Fine. This was going to be a real fight and I wasn't just going to lay down and die. I nursed my microwarp drive usage. I kept it off except for when I was using it to push outside of his blaster range. He never pointed me but I left the point on him. After all, this was MY complex and I was defending it to the end.  My shields were back to about 70% and I was feeling good about going in and trying to brawl it out a bit more when he warped out.

Oh. I stared at my decycling point. Well then...

I blinked and told him in local I was going to fight again once my shields were up. He responded in Russian and according to Google translate he said, "lacked speed". Oh well. I docked and repaired and went back to my plex. I conquered it and boldly flew into a small with the intent to own it as well (and hopefully have someone come kill me).

I captured another complex and frustrated, went to feed the dogs. I returned and dove deeper into the warzone and picked a system with neutrals and enemies to dive into a Novice plex.

There I met a suspect Atron waiting on the warp in. He is my size! Yay! I found myself webbed, pointed, and in half shields before I finished locking. T2 rails. I'll remember that next time. It looks like I need some locking skills. Eventually, I pointed and webbed back, burning furiously as I died terribly in another two shots. I was even podded. If I had not tried to warp to a wreck I'd have been okay I suspect. The derp cost me my blank rookie clone.

So... 18k LP richer and one Condor down ends my first day in defense of the state.