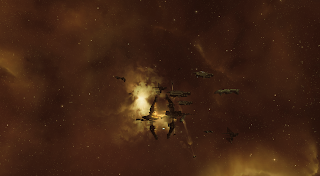 Our incursion fleet! Or, our anti-incursion fleet since we were trying to kill the group that decided to run the incursions while we waited to do other things. There is an incursion in our home pocket. It is irritating. So very irritating. The system is cyno blocked. There are instalocking gatecamps on the gates. Our stats are all screwed up and in general we somewhat have moved out for a week. This is my third incursion in Molden Heath and the first one that was this in my face. Fortunately, incursions are constellation based. One hop into Oddelulf and we are clear to Bosena where most of us have a secondary base anyway.

While it is irritating and inconvenient, I do not think it is bad. Yet, whenever how irritating and inconvenient it is is brought up people are like 'tough' and 'oh lol look at the pirates whining about NPCs'. I don't know how many high sec residents have spent time in low sec or null sec incursion space. In high sec newbies are warned not to go belt ratting or mining in incursion systems and to move their mission running elsewhere because the NPC rats are harder.

And that is that. I have flown my freighter through many a high sec incursion. And, as I deal with another low sec one I think, well what if they had to have some inconveniences? What if the NPCs at least started shooting things? I'd not suggest that they point and scram as they do outside of high sec because that would never be tolerated or thought of. But, a bit of aggressive pewpew on the gates would reward those that autopiloted and sat still, not paying attention to the clear warnings that something terrible was happening. Because, are not incursions supposed to be terrible? Would that cause an outcry loud enough that ending the incursion became more important then the farming of the incursion?

I doubt it. Few things motivate like ISK motivates people to do things. The entire incursion thing is wrapped around soaking as much out of the incursion while moving as little as possible.  I've spent time doing it myself. I don't enjoy it and I don't want to do them again. I know that they are good ways to make money and they are a social activity. I do not think incursions are bad nor am I entering into a debate for the question do they make to much ISK.

Should they be a touch more dangerous instead of something people, for the most part, ignore?

Risk vs ISK is very popular. The incursion may be worth us doing if the entire corporation logged in to do it. But, if we logged in as an entire corporation there are so many other things for us to do with that resources of personal time. Such as, go PvP. Now, that is a choice that we do make to ignore the incursion and move instead of handle it but it is also a choice that we have to make. We cannot just ignore the incursion and do business as normal. One group has decided to run them and make ISK. Good for them. The rest of us are cautious about our movements and take extra care.

Should this be the norm for all of us? NPCs that are as vicious as incursions NPCs? I believe that I'd hate it but I might as well toss the question out there. It would change everything and force people who ignore PvE to pay attention to it as well as destroy solo movement in anything not tiny or invisible.

I have a POS to fuel and boosters to make. I will have to move my refuel and booster shipment in by blockade runner now. The M3 that I will be moving will mean 15 round trips. Fortunately, I have two accounts who can participate in moving the stuff which will limit me to 7 1/2 round trips between the two accounts. I loaded it up into a freighter and moved it to a high sec staging system one jump out of low sec. To increase my efficiency I selected the system closest to the gate. None of this is hard but all of it has to be done if I want to continue living my productive little life in low sec.

And that is what led me to the question in the first place. Life, balance, and the universe itself are continually addressed in the game.
January 03, 2014