When I am in Minecraft I am in Space

The best part is that I can calmly and honestly blame Susan Black for all of this. It is quite refreshing.

Susan commented that she has been playing Minecraft and that she is playing on an Amarr server. This caused Altaen to say that that sounded cool and me to go, "I've been wanting to play community Minecraft." A quick message to my husband and a "npnp" back and we were in business with a community server for our corporation and friends.

Brando gave it a try and sank right in. We logged in with a PvP survival mode. It turned night, Zombies and Creepers chased us and we managed to get established, build a newbie house for new members joining into the game, sort out a Minecraft channel on coms to compliment our DOTA, WoP, Civilization channels, and we were in business.

I've now done logistics on Eve, chatted, and not undocked at all because I am building my house out of sandstone in a sand poor area. Of course, we played Minecraft all yesterday evening and today which caused Altaen to scold us and say he was rejecting Miencraft forever due to low fleet participation. What darkness have I brought into our lives?

While it is a shiny new toy I expect for us to play and then most stop playing with a few that play a few times a week.

Our Molden Heath community has grown from an Eve community to a larger, out of game community. When people tire of Eve they stay and maintain the relationships they have made as they play. Others, play other games when time commitment will not allow them to actively participate in the type of Eve that 7-2 focuses on. Everyone plays together and that constant interaction creates a stronger bond then corporation or standings. I find myself thinking of things very communally. Someone new was on coms and I popped up to say hi and see who was visiting "us".

And it is amusing that everything is Eve themed in our games. The gate to the Nether is called the Bosena Gate. Vand's horse is named Sleipnir and Naughty's after the rulers of NPC Empire. In Civilization often people name cities after neighboring systems from our home.

We did drag ourselves away from house building and farming and fighting zombies to have Eve time. A Jabber ping went out and we herded off the Minecraft room to the main room and logged in to assist a fleet. That turned into a scouting trip around Molden Heath where we tried to jump a group running level five missions. We failed to grab them due to mission gates and aware people (the horror). However, we found an unsupported capital fleet bashing a POS on the way back home. 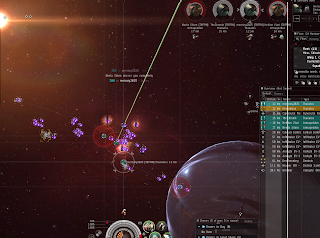 This was a wild dash by our scout to pin some down and the read of the fleet race to support. It worked out. Suddenly dreadnoughts.

It's late now. Vand is riding Sleipnir off looking for a desert. I don't know what they want with a desert but everyone wants one. It is a full PvP server but we work together to do things and we share most stuff as well. The PvP aspect makes us pay for our mistakes. When we fight a monster we have to coordinate or we kill each other. It lets us set traps and in genearl do what we want to do, which, is mostly, get along.