What Type of Player Comes Calling?

Last night, I was watching a new player ranting in Eve Newbie chat. He had died in a rookie mission, one of the ones that tells you you will die. He turned in the mission and now could not get back to his wreck. His wreck, of course, had everything he had accumulated this far.

Now, this is a common series of mistakes. Loading all the things into the spaceship makes sense because the ship is your avatar and normally you carry everything with you. After all, you die and just reload or run back from your spawn point and pick it up. Only, he learned it doesn't work that way in Eve. Because he turned in hte mission and does not yet know about bookmarks he is short of luck. "But I have no stuff!" he wailed. Everyone explained that Eve automatically gives you a rookie ship and he can do his mission in that. They told him that he has to read the mission guides for the tutorial missions and someone even sent him enough ISK to buy another Rifter.

He was still mad. Can he skip the tutorials? People tell him to do the tutorials and read them completely and that they will tell him that he was going to lose his stuff and not to risk it. Suddenly, the entire game was sexually attracted to its same gender, it had a limp, and he was going back to League of Legions because this was terrible. He was told, rather politely for Eve, "Good luck, have fun." I didn't try to convince him to stay. When after help and explanations he guidance one can only rage, Eve may not be for them.

But it made me think, what does it take to stay? He said he liked the game. I believe that he did. He liked it until he died and lost his stuff. When stuff retriever turned out not to be a minor inconvenience but a solid loss the game was terrible. There were recovery options but they were not acceptable. Damn the game, damn it.

Is it the player or the game? In some games it is the game.  Most of the time it is the player. I pondered his ranting and raging for a moment and compared it to situation in my own out of Eve game play.

My husband is a gamer. He is not a hardcore gamer but he is a completionist. Not an achievement completionist. He likes a game with a lot of story and he will play the game over and over to get all of the storyline out of it. He plays Skyrim and Fallout to the point that Bathesda's content creators would burst into tears of gratitude for it. He does not play Eve.

Both of us are currently playing Minecraft. Let me explain what happened last night.

My husband has decided to move away from our little village a bit. On the way exploring he found sand for me. I need the sand for what I am building. He collected the sand, got lost, and died when he fell down a hole. He got very upset. He respawned and immediately ran back to his stuff and almost make it back. Frustrated at being lost, the night time, zombies, and the terrain he started to rush with only a small amount of health. He wound up falling off a cliff and dying again. At this point he was super mad and frustrated at the game and how dying like that and the frustration and planning of nighttime took fun out of the game for him.

Frustrated at him being frustrated, I went to my house, harvested my grain, went to the rookie house we have set up, harvested that field, made myself some iron weapons, emptied my inventory, loaded up on food, checked the coordinates and headed out. On the way there I coordinated with everyone on the server to sleep through the night cycle to maximize my travel time, and eating to keep energy up made a full sprint to him.

We found his stuff. I then did recon back to base, coordinated with the other players to push the night cycle again, and we got back home with minimal losses. The entire situation was, to me, an example of why I am an Eve player.While I don't like to lose things, planning and tactics are part of the game play to me. My husband bolted naked into the forest enjoying the block landscape. He wants to play the game not fight with it. Survival is not the easiest play style and watching his frustration as he loses stuff and his frustration that things happen (such as getting pushed into a lava pit by a Spider because he was up at night because he felt he could handle anything attacking him) has been an eyeopener. I take that same situation feel frustrated and just slog back at it. He doesn't like the slog. I find the constant battle to keep what I have gathered fascinating. 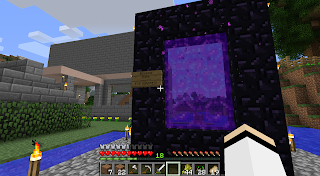 What draws us to Eve and others away from it? There is obviously something that we get out of Eve due to personality. It is something that we can show another person but they must have in themselves. As I was relaying the above adventure in chat Vov says, "He'd hate me." And yes, he would. Vov is a griefer and comfortable in that position. My husband would hate being ganked  because he would only want to enjoy Eve the game and not Eve the MMO.

How often do we hear that line? "I just wanted to play" people say. Well, they are in an MMO and you cannot make that decision for them. Yet, the people who are still out there, playing, even as they bitch and whine about griefers, have at least some of the core personality needed to play in Eve successfully. In there is enjoyment from challenge and acceptance of loss.  Pixelsthe game may be but the time and energy put into interacting with those pixels are valuable.

In some ways a stressful game for relaxation does not make a lot of sense. But, that is how some of us enjoy our so called 'down time' although it is better defined as personal time. It is the time that we seek engagement and mental fufillment. My boss commented the other day that you cannot train people to multitask at a high level of awareness and expect them to happily sit quiet and unstimulated until you are ready for them. We tend to seek out what will engage us. For some of us, it is a game of more complex survival. Such is the reason for the enjoyment of DayZ even in pure Alpha.
December 20, 2013