Stress for the After Rubicon Interceptor

Last night, when I got home from work, Diz tells me to get into a Malediction and come to the fleet. I go, "Maliwhattion?" and scuff my toe against the ground. I can't fly them. I don't have Amarr Frigate V. I've never had any interest in Amarr frigates. Unholy, I know.

"We need an armor interceptor."

"Yay!" I undocked Poptart, my Ares.

"Do you have anything expensive in your head?" he askes me.

I docked Poptart. "Not in a moment." I jump cloned, jumped back into Poptart and headed out.

I should retire poor Poptart. He has been through a lot and dragged himself through each time. However, I love him. He is my absolute favorite interceptor to fly and I don't know why. Off we went to catch up to the fleet as I went, "Weee!" in the background.

I haven't flown interceptors in combat since Rubicon landed. My Jag is already a lot faster. The interceptor is like a slingshot. Warping after the fleet and landing on the gate several seconds before the fleet (cruisers) is going to take a lot of getting used to. I caught up to the cruisers. Yay!

That is when I discovered the true horror. I can't take a bathroom break during long warps anymore. Interceptor is on the gate right now! Ahh. Woe is me. How stressful.

I did discover the new bubble colors in person. 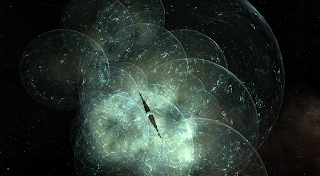 The lovely pale green shimmer is somewhat minty and refreshing as I plunged face first into them. We got into a fight on the other side of this. I managed to not die. 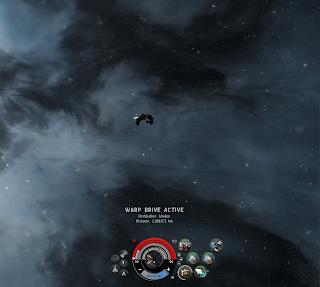 But goodness. The extreme speed makes for extreme roaming minus biological needs. Was this really thought through? Sure the feeling of transporting across systems and smashing face first through a bubble camp is unreal, but honestly... player needs. :(