My husband loves the public service announcements from his childhood in England. He learned to paint his bike white and to not talk to strangers looking for puppies. Great things, I'm sure. Honest. Anyway, an effort is made to hand out some common sense and make obvious reminders. Reminders are useful in a frenzied, busy life to take a moment and make sure things are taken care of.

You know... the simple things in life... Turn off the oven. Lock your door. Don't leave your keys in your unlocked car running in front of a crack house. Take the PLEX out of your cargohold before you move your stuff to a new corporation. Simple things such as that. 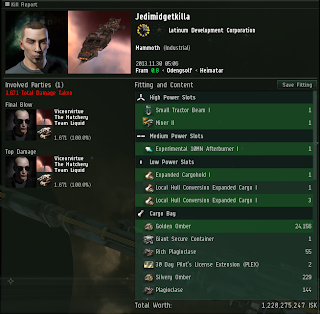 The above pilot was very good natured about his loss. He forgot to clean out his cargo and forgot that he had purchased the PLEX since he was undecided about what to do with them. So, he tucked them away and forgot about them. But, Vov found them.

Forgetting to clean out a ship can happen to anyone. It is common in capital pilots. Some capital losses make an eyebrow raise with a puzzled, 'wut?' form on the lips. A moving op a few days or weeks before and suddenly an expensive loss mail is created as blueprints explode by the hundred littering the field with the fluttering edges.

It tends to be a self correcting problem. I have lost a booster shipment before because I forgot I had it. I decided to change my flight path to hit the high sec station I needed first. Well.. that didn't work. I remember going, "No! No! No!" as I died. As if my cries would have stopped the payment for my ill attention. So far I've managed not to do that again.

Sometimes it hurts the one doing the hurting as well due to the loot fairy's fickle roll.