What Was and What Will Be

There is something blissful about the end of a long train. It is almost as pleasurable as the first long, body arching stretch in the morning. When Aura for Android chimed that Sugar's skill queue had dropped under twenty four hours, I could have burst into song for the joy of it. However, I will leave the bursting into song for Kaeda and just burn in satisfaction.

Sugar is finishing Sentry Drone Interfacing V. This gives access to T2 Sentry Drones. It is an important skill for many reasons. Some will cry drone assist but I'll roll my eyes. Sentry drones are necessary for several of our battleship doctrines and for our Ishtar fleets. They give me access to another large weapon option as well. Heavy drones have their place but their slow speed is a hindrance in fast paced small gang PvP. Although static, sentries provide a wide range of options. It also moves me that much closer to my goal of being well rounded.

Learning T2 skills is a pain. I will plug in Heavy Assault Cruisers V next. I've been flying the Vagabond a lot and until they nerf Ishtars, I see them as a staple in our fleet comps. So, while it is a pain, it is a rewarding pain.

To celebrate my accomplishment (for I consider it such even if it is but waiting) I shall look at my past. Each time I finish a T2 weapons system, I am reminded of my first few weeks in the game. That time when nothing makes sense, one is standing at the edge of the learning cliff, and the need to learn is a desperate burn. Like most, I had latched onto more experienced and I hung off their every word. It was before low sec and before I even thought I might do more than build spaceships in high sec.

Welcome to the Ghost of Bad Fits Past.

This is one of my first bad fits. I don't count the normal bad fits of starting. There is a time in most players lives where mixing guns and ammunition sounds brilliant. Who knew you should have a rack of the exact same guns. How will you kill all the things? What sense does that make? It is also, I think, the start of my becoming terrified of fitting things and learning that I knew nothing about what it meant to be successful in Eve.

Back when I was first starting and learning to do missions, I needed a ship. Chella was Gallente because I thought that they fitted my personality best. I picked drones because I had always done well with pet races and castors. I had a natural affinity to kiting because I've always been the distance damage dealer. But, in Eve, I adored flying my spaceships to death and slowly I worked through a various assortment of things.

This was back when Vexors were mining cruisers with mining bonuses. My first screenshot of Eve is me mining in a Vexor. I had moved up from a Thorax and it had been recommended to me that I get a battlecruiser to venture into level 3 missions. My trusty Catalyst which I flew everywhere was put aside and I aspired to a Brutix. I was told that my method of flying with my Thorax was very aggressive and I should get a Brutix because it would fit me best.

I knew nothing. I both laugh and cry as I think about my sweet ignorance. The mutated fish look of the Brutix appealed to me. I aspired to level 3 missions for level 4 were beyond my scope of reason. Battleships.... why a Dominx was eighty million ISK. Unaffordable to my Vexor mining budget. The Brutix was going to be over forty and how I scraped, saved, mined, and salvaged to afford it.

When I finally got it, I asked my mentor at the time to help me with a fit. He had a taste for spaceships and had a rack of expensive battleships. I remember how he was worried about flying them because he was terrified of being ganked. None of them were bling fitted but he left the impression that high sec was full of people who did nothing but gank expensive ships because they were there. He was always extremely paranoid of this and I knew that we had to protect him to the best of our abilities.

Remember, I was about three weeks old. In a battlecruiser trying to do level three missions. Along the way to this goal I met Lue and he did some light missioning with our absolutely shit fit kitchen sink high sec industrialist corp. His tolerance and easy going attitude was one of the foundations of my game and a mind set that I hope I replicate. He never insulted or belittled us for what we were doing. He just gently helped and kept us company because he liked us. How I appreciate that.

My fit recommendation... I still have the notepad where I carefully cut and pasted the modules.

And the end result: 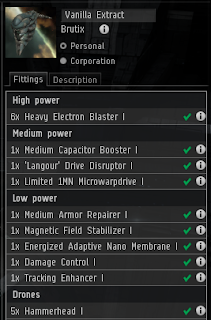 It took me all day to put together. He told me to buy the best named modules. I had no idea what he meant. Many of the named modules were also expensive. I was quite poor at the time and fitting that ship took me hours and stretched my finances. I had basic skills in everything. I doubt I knew Medium Hybrid Turrets beyond level 2. I remember that I was training my mining skills up. Yet, I was proud of it. I had many adventures for the month that I flew it (Like the time I fit a cloak on it for Low Sec and hid from Ueberlisk when he came into my mission). That was before I learned about fitting things properly and flying things well. It was back when I was barely able to stand up in a level 3 missions and found myself weeping bitter tears of frustration as I was told, "It's not hard. I don't know why you can't do it." How I hate words such as that.

I sold the Brutix in the end because I could not do what I was supposed to be able to do, easily. A lot of my failure was ignorance and the rest this fit.

Ignore is something that can be cured and bad fits can be improved. I realized the other day that I dislike flying Brutix because they trigger an unpleasant feeling. One, that is directly related to this phase of my life. It is a time past. My Brutix is a much more scary machine these days.

It would be easy to slide this part of my life under a rug. I never PvPed in that boat. Instead, I find it interesting to air out. It brings the ridicule of some but also a touch of humanity for others. It is easy to ridicule a bad fit, especially by a new player, and forget that at one time that bad fit might have been what you were working out of. Some fits are truly senseless and I do wonder what they were thinking. But when I find myself feeling the scorn and ridicule wash up, I sometimes look at things like this. I may not fit like this anymore but at one time I did.

After two years I am acutely aware that I am no longer the new player that I was. Sometimes I even want to argue tactics. Time moves on and we gain experience. But in the gaining one does not need to lose the start. These days I'm comfortable with what I fly and I am steadily accumulating a wide and solid base of PvP. Revisiting the past keeps me humble and reminds me of how far I have come. Both are positive things in my book.