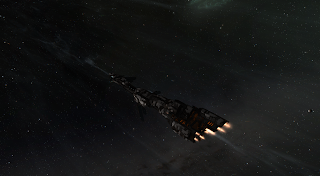 Did you know that the Vagabond's engine area glows a rich orange when the engines are active? Some of the subtle color details really are amazing. Today, however, this Vagabond was a large Jaguar. The boys were having Battleship Sunday. I was tempted to skip. I still have no love for battleships. However, I realized that they would need tackle. A Jaguar was going to be a bit light when I thought about lock times for battleships. The Vagabond seemed to fit the bill.

I ran a bunch of logistics and got myself a semi-expensive faction scram for my Vaga. Those few extra meters matter when you are the only thing chasing down things to tackle. I also irritated (maybe) the hell out of everyone calling that I was leaving Jita. I hate being annoying but living in Solitude is a major pain in the ass when people need things. We switch ships so many times a day that keeping everyone stocked is like a dance.

Battleship Sunday, as I understand it, is their desire to form a battleship fleet and go roaming. They do local tank for the most part, no logistics, and only tackle if someone like me wanders along with it. It is a for fun fleet for a ship type that we don't fly very often but everyone seems to adore. We expect to die but hope to get a good battleship fight in the process. Eventually, waving that many battleships around is going to draw something crafted to kill them all. The goal is to get a good fight or two in before the inevitable hot drop. 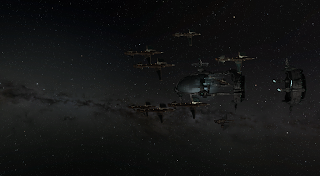 Not that far out we saw a Mega + Guardian gang come after us. We spent a while setting up and moving as each side tried to gain the superior tactical position. In the end, another fleet jumped into us. That was a brief fight where three things died and we lost our Tempest. Loot was scooped and the boys regrouped.

I was pleased with that fight. I was off grid, checking on the Mega + Guardian fleet when it kicked off. I warped to gate and immediately was pointed and tackled. That was fine with me. Those ships were diverted, I took some damage and jumped the gate. I burned back, jumped back in, and started to assist. I'm always happy when I have a thought out plan of action for what I want to do. At this moments I feel like I understand things. Thankfully, Eve makes sure that my ego doesn't get fluffed.

"They are coming back." Floor said, calling me. At the time that I dropped loot and warped back to them there were only a few recons on grid. When I was in warp the rest of the fleet landed. I found myself smack dab in the middle of a mess. I had been debating coming in at various ranges. Maybe I should have and worked at chasing things around the edges more. Instead, I tried to slip in and kill something before I was noticed. Being noticed did not take very long. I managed to get up on an Arazu and scram him. I was so proud of myself. I would kill this Arazu even as I died. Except, it kept not dying. I had missed the three Guardians and three Aurgorors so my glorious plans didn't work out. I died but my single shiny mod didn't drop much to my joy. We lost three of our battleships in an interesting enough order that one wonders if they were working down the FC list. If so, it doesn't help overly much since most of the fleet members are experienced fleet commanders (except me. Hell no. That's a hard job.) but it is probably just a coincidence...

And that was how the large Jaguar came to its end.

It seems that the Tuskers were having a public roam. Their public roam teamed up with the Mega fleet we had been trying to fight after they came through us the first time. We had this great idea of getting them to team up with us for said Mega + Guardian fleet. Oh, the beauty of purple and the freedom of no blues.

There was a bit of conflict and spinning around while we reshipped. I wound up in a system called Barleguet which has a huge, stocked market, and after about twenty minutes of indecision I pieced together a slightly over priced regular Jaguar. It was the only thing that made sense. I couldn't fit a Vagabond out as I wanted and I had to chase the fleet so wanted something I had a chance of catching up to them with when they decided not to do a drive by of where I was reshipping.

I then bolted for the fleet. I crossed a few other fleets along the way, making me glad that I went small. The current FC (for at any given time we have multiples) had decided to drive the fleet into null sec. As I crossed PPG-XC which has a popup:


The famous dueling tournament, 'The Legends Trial', has moved to PPG-XC, to escape various expenses associated with having its tournament inside Federation space. Also by staging the tournament here, it can choose from a larger variety of competitors, such as criminals and members of outlaw organizations which would be immediately arrested in Federation space.
The Legends Trial is a popular show on Federation TV, it is broadcasted to billions of screens across many regions. Huge money is at stake, and gambling on the events is extremely popular. It is therefore not surprising that various criminal networks are working hard to 'influence' the outcome of the show and rig fights. The organizers of the Legends Trials have hired a sizable mercenary fleet to protect its assets, but even so it has become extremely vulnerable to pirate meddling, especially due to its new location outside of the protective embrace of Federation space. Certainly a freelance merc pilots dream come true.

There are a lot of cool places in Eve like this. They are like bits of story and lore left scattered out there for no one to remember. I guess whomever had this type of thing as a project is now gone. Hopefully, it is something CCP will look into resuscitating as they update their game.

We worked our way out of null sec and headed home. Battleships are cool but frustrating. We were working fleet avoidance in every direction until we were whittled down to two battleships, a Broadsword, and two frigates.

In null we tried to engage a group and got chased by a larger group that killed another of our Maelstroms. We'd been out for around two hours and I was ready to go home and start dinner. However, I had no idea where we were and how far away from 'home'.  This ie one of two weekends that the boys have left to do this before the new warp speed changes makes battleships not so much fun.