Every now and then I get excited and pretend that I can make graphs and such things. In truth I'm terrible at it. That is why I stick to writing about my market stuff. But, returning to Bosena and sinking back into the market as well as being almost nine months into the project of running a market seemed like a good time to look at some of the charts.


This is a very good example of what happened when I left Bosena for a month and a half. We deployed during the first days of October and returned halfway through November. The steady push upward after the steady pull down. is obvious. Large Shield Extender II's are a staple module. The year view is also very interesting. The high arch in February of 2013 is one of the things that drove me to start Bosena's market. Prices in the general area were just going up and up and up at this point after downward pressure from Sard's running Bosena. 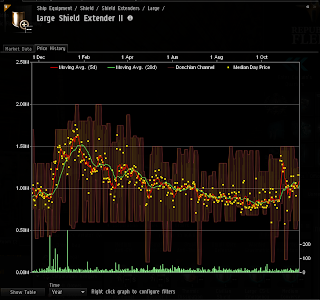 This is one item that has a nice, clear graph for my topic. Other items show the same reflections. Some have weirder spikes and things like Odyssey have to be taken into account. Changes in the structure of the game raise and lower prices at an almost alarming rate before they settle. There isn't anything I can do about it but ride the waves and try to buy in moderate amounts as not to be stuck with overpriced stock.

However, I do point to the graph as an example of what one single market, and a low sec market at that, can do to an entire region. People will go to the reasonable prices even when it means jumping into the scary world of low sec. Right now, 70% of my stuff is being purchased from people I do not know and that is with us in the area.

I am no longer consistently the lowest in the region. I'm now being undercut in high sec and finding myself settling near the lower prices but often not there. The various high sec systems are pushing themselves down by 50k under me and such things. This thrills me. It means that all of this time and effort, the listing and learning, has made a difference. A noticable, marked difference that I can point at. "Look here! Look here! Look at the steady downward spiral of market prices!"

But the market prices do not reflect less ISK for people. It could be seen as such. That I should also list high and then if everyone lists high everyone makes money! YAY! It is just like the terrible eve-mails I keep seeing from .01 ISKers to people 'tanking' the market when they could just .01 ISK all day! It makes me roll my eyes. That is an unhealthy region not a healthy one. Rens is only five jumps away from Teon. That is not so far that someone, steaming over wallet abuse, will not go and buy what they need and return to their mission hub. Instead, they are staying locally, even coming into low sec to shop. That means people are making more ISK not less. Immediate greed is a shallow pool to splash in during a hot day.

I'm not losing any momentum with my market. I really, truly enjoy this stuff more than I could have conceived that I would enjoy it back in march. I really, really enjoy doing this. You should see me glow when I go all gamer geek on someone and gush about running a market on a spaceship video game. But, the additional encouragement from seeing my efforts help. I know I'm not a station trader or wallowing in trillions of ISK. But if anything the fruits of my labor are a faster selling market which means that I do earn more ISK. My boys say, "I'm heading to Bosena to get fit," and I smile. I smile every damn time.

For those that have told me, in chats and in mails that they have started a market, this will hopefully be added encouragement. As is par the course, I try to lay out what I do openly and honestly. I don't think that it is anything super special ability wise outside of patience and the ability to hold on for the long run. I've enjoyed the stories I've heard of others venturing into this. I don't think that I have a unique vision about markets in Eve but I am glad that people have gleaned information from my journey.

The Cougar Store, Bosena's place to be.