With steely eyes and razor smiles the Jaguar lays above its prize.
-Sugar Kyle 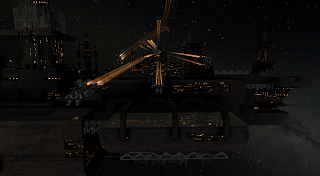 Dave asked for a Jaguar roam two weeks ago. Of course, I choose a day that he had to go to work. However, the idea seemed good. We would be headed back to Molden Heath soon. A few organized fleets at the end would help us leave on a positive, productive note. It is easy for deployments to drag out and start to go stale. That leaves a bad taste at the end and creates resistance the next time.

I posted the op for a Jaguar fleet. I corralled my fleet commander and I then promptly forgot about it. After the fight back in Molden Heath on Wednesday, the boys were scattered to the winds and getting them back to Syndicate seemed futile. On Friday, however, I was asked what time the fleet would be. I peered at the forums and saw that people wanted to fly. Oh. I picked a time and sat down in Jita to take care of the serious business of buying the fleet.

For some reason people kept asking me if I was going to FC the fleet. The answer was no. I feel that I don't know shit every time I undock. I'm terrible at so many things. Why people would want to place their trust and free time to my inept hands, I do not know. I feel warm and loved but I do not have the sense that god gave little green apples to lead anyone anywhere in this game. Or so I feel. Being a FC is a huge responsibility and not one I'd want to take on casually.

2000 came around and team speak started to spike. I received many, "I told you so" messages from people. Yes, I had worried that no one would come to the Jaguar fleet. I always do. The ship is my personal obsession. I wound up with a lovely fleet of 15 Jaguars, a Celestis, a Blackbird, and 3 Scythes with minimal bitching about the fits. I think we went up to 16 Jaguars. I was tossing contracts at a few late comers. Also we had links as well. All set, we headed off to see what we could see. I then remembered to ping Jabber! Whoops, I should have done that sooner.

Some of the soloists had taken their ships, undocked, and gone out fight hunting. Every time I watch the solo pilots do their thing I know that I will never be much of a pilot. I'm always uncomfortable at doing vastly independent things of the fleet without prior communication with the fleet. At the same time, I expect to do my own thing. One of the joys of the Jaguar fleet is that it is all about independent piloting while working together. The ships are tanky and fast and the DPS reasonable when I skimmed down the speed some. Because of the Scythes we had a mix of webs, target damps, long points and short points. It creates a lot of flexibility.

Our first attempt to poke the locals didn't create much. We buzzed around for a bit before we went off to poke at another place. I got selected as part of the bait fleet. We wound up stumbling upon Ev0ke. They undocked a few things. Then some more things. Then all the things. We bolted back to the gate and waited. When they didn't appear we were told to warp to the sun. As we left gate they landed. We turned around as they jumped into the body of the Jag fleet. On the way back we got hooked by a catch bubble. There was an Ares on our side so I stayed with our bait Scythe until the Ares jumped and he made the gate. Once that was done we joined into the fight. 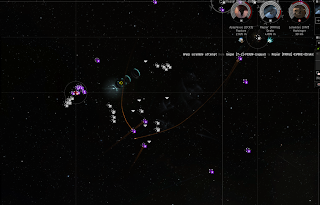 But one does not have to believe me about how amazing this was. Roigon captured it all and built a video.


We lost two Jaguar's pretty close to the start. Once our links went up we stabilized under the DPS of their Battlecruisers and started to work through the fleet. Points were spread, disruptors and webs were spread, it went very, very well. We also had fantastic communication and used that to pick off the neuts and nab their tackle. 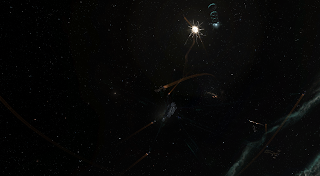 Here is the killmail summery. http://seventwo.killmail.org/?a=kill_related&kll_id=20502609 It still isn't complete because we did kill one drake.

We lost a Jaguar, our Blackbird, and the Celestis to bait on a gate for bombers. People tell me bombing is great fun and I guess worth the wait. We have that dude in Great Wildlands who sits on a gate in a tanked Rapier baiting gangs for his bomber fleet to bomb. I just chalk it up as something that doesn't work for me but works for others and move on.

There were other choices and some heavy gangs moving through at many, many times our numbers. The Jaguar fleet is a swarm not an Alpha fleet. We rely on speed and awareness to take down targets. Jumping into an anti-Jaguar blob is not smart. Therefore we avoided some groups. I don't put together Suicide fleets. The goal is not to go and lose everything. The goal is to have a good time and find some good fights, such as the one with Ev0ke. If we die securing those goals, so be it. However, never, ever is the goal 'let us go and do something stupid and lose our ships. Maybe we will kill a Condor on the way out." Not my fleets.

Thus, I rolled my eyes when someone from Eve Uni's null sec group said, "But you ran away." I do wish Syndicates residents would decide on if we are running away, over shipping, comps to hard to counter, camping people, blobbing, being kiting sexual slurs, or whatever else. There is no cohesion to the insults. And why exactly is is bad to not step into a meat grinder? Insinuating that "all we do is run away" isn't going to suddenly make us go, "Oh yeah! We'll run this fleet of Jaguars into hard counter and see what you say then!" I know that it is a tactics. It is just a stupid one. Let me jump into Hurricane x10, Talwar x7, Scythe x3, Saber, Slasher Xmany and some Griffin and Malus for flavor.

Normally, I don't speak in local. However, I have a particular attachment to Eve Uni (considering I've never been in it) and I hate to see ridiculous things in local from their memberships. I let my sarcasm flow. It isn't going to make a difference. It is stupid to do. But, I have my tolerance levels. We also left and decided to shut down the fleet for the night. It was a solid threeish hours out. The EU peeps were tired and the US peeps were ready for a break before the evening called.

And such is the first part of the night. The Jaguar part.