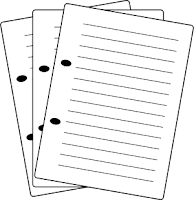 When I was in high school part of my grade was 'notebook organization'. Basically, there was a way that
they wanted your notebook to be structured. Warm Up exercises, handouts, notes, homework assignments were all to be placed and labeled correctly as per the instructions given at the start of the year. Any deviation was marked off. This was 30% of the grade in the classes it was assigned to. Let us say that I was never a straight A student.

One of the things that I hated about the organization grades was that it was forced organization. Having all of my items, being able to get to access and use my items, was unimportant. In the formal structure of public education they had to be done in a particular order each time. Heaven forbid individuality. Being terrible at conforming and stubborn about things that are stupid and pointless, I was not able to comply. I believed that I was terribly disorganized because I could never get everything and keep everything how they wanted.

When I finally escaped formal school I discovered that I am a very organized person. That is because organization is an individual things. I'm not speaking of Hoarder level belief that they are organized when they are not. I'm speaking of the flow that an individual develops with their own things if they are organized. I am a highly organized person when allowed to structure it in a way that makes sense to me. It may not make sense to anyone else. Force me into someone elses standards and I fall apart.

"But I shouldn't have to be organized in a video game!" Sure. You don't have to be. But really, when I play Diablo I damn well have my crystals organized by color and size. Stacking is seen as a gift from the gods of Blizzard. I spend massive amounts of money to have more container space and selecting my house in Skyrim and Fallout were based upon their layouts for my own internal organization methods.

It is almost ridiculously easy to lose stuff in Eve. Even when you know exactly where it is you can still lose it. Most of us are hoarders as well. After leaving Syndicate most of the corporation realized that they never consolidated their loot from all the stations out there. Oh well. Messy asset list.

I found the moving operation on Monday to be stressful. Part of that was the fact that I was running four clients. Each client had a task to do during the move. One was moving ships for people, two were making jumps in different directions for different reasons, and one was one of the cynos along the chain. I felt like jelly when it was over from exhaustion and at the same time I was wound up in a tight knot.

I take my logistics movements seriously. What I found myself doing was checking each window, double checking the character, going through fuel checks, and making sure of my jumps. I'd very cautiously double check what account was doing what each time. When I went to bed that night I was thinking, "I need to have a better system to recognize my individual characters.

I decided to color code all of my accounts based around what they do. The Eve UI may not be the most customizable but there are lots of little, fun things that can be done with it. I tend to keep my screen on a black and grey theme. I like dark colors. Yet, I realized that changing the colors of my alts might relax me a bit more when it came to making sure who is who with the docking and undocking thing.

It will take a bit of getting used to the different colors. I want to revert to my normal but I'm going to push through until I get used to it. That sounds as if I am somehow suffering. I'm not. It is an interesting experiment in organization. I already have my hangars in my corporations set up and containers set up. While in Solitude I brought extra containers and managed to secure a piece of Titus' love by handing him a stack of containers one day when he asked. Organization makes some of us happy in this game. I'm one of them.