What is in my deployment hangar?

This question came up on twitter while discussing the work involved with moving a corporation the size of 7-2. My hangar is, I figure, normal. Or, normal as normal is for my lifestyle. I am used to having a lot of ships in a lot of different fits. There are times when we dock and undock in a completely new fleet comp so that we can adapt to the situation that faces us. 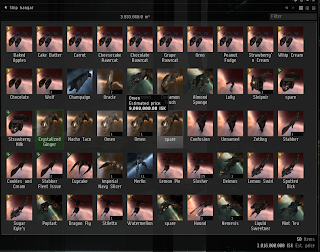 I already need some replacements. I gave Diz my Throax for instance (we tend to lend on a "you break it, you buy it" policy) and need to replace that. I am frigate and cruiser heavy. My battlecruisers are tier 3/assault for the most part. I believe I am fairly boring and predictable and for my first real night of PvP I decided to be bold and break out an Omen.

Lazorzzz! Titus went, "What? When did that happen?" and Altaen told him that I can Oracle now. There was pride there in Altaen's typing. I even unleashed the true secret. I can also bomb now. Badly. Very, very badly but I can make it happen in the most pathetic sense of the activity. There were a few gasps there and someone who shall not be named but I am sure he can feel the glares igniting his head suggested that he may have to lure me into training the evil pewpew of missiles.

Off we went into nullsec. I managed not to get pulled into a bubble first jump. That is always a good success as far as I am concerned. Word was that Eve Uni has a Moa fleet out. We decided to go engage it but it vanished from our scouts senses. We wound up spinning around and they came after us in a cruiser fleet with Guardians. 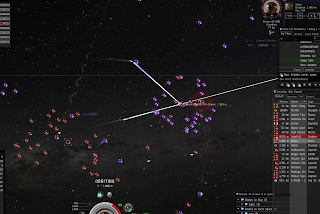 I started to get shot with rather much hurting. That came after a slow gnawing of my shields. Then, I watched all the drones trying to kill me and found myself to be unhappy with that situation. The fleet started to burn through most of their fleet. Point dropped and I bailed.  I was catching reps by that point but I decided to remove myself as a target. I would come back and reassist and hopefully be less appealing. I announced my decision in fleet chat to the relief of one logi who thought I had gone down when I vanished. We had two Augoror to their two Guardian. 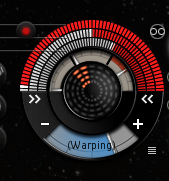 Yeehaw. Alive and in 63% structure I warped back to the fleet. We wound up tackling their Arbitrator on the other side of the gate. The Throax made it off. We had zero fast tackle with us.

It is fun to be a DPS ships sometimes. I was along for the ride. Work was super bad the last two days. I have gotten home an hour to an hour and a half late each day. I've also haven't been sleeping enough. Needless to say I am a bit of a walking hot mess and fine detailed things like tackling and not dying from flying straight into things guns was beyond me.

Second fight was interesting in that we landed on the gate with him and both sides spent some time dancing between the gates. We bounced back and forth and they did. Everyone tried to estimate what the other side was going to do. They jumped their Augorors through and we pounced on their Brutix Navy issue. By the time they got back in we had it in low structure and killed it shortly after that. Everything else started to die at that point until we held the field.

There was a though that they would return. They did. We managed to jump but before we got off the gate one of our Augorors was tackled. The FC called for a full stop but only only Rupture stopped before warp kicked in. He was tackled, the Augoror escaped and our poor Rupture died.

We slipped home through low sec. I was done for the night. It was a good fleet.

Then Altaen and Van cannibalized each other on the undock over the Internal Force Field Array I that I had accidently given to Altaen thinking it was his when it was one of two that I brought for Van instead. Look at me, making content. Although, content may not be defined as the boys shooting each other.

My deep thoughts for the day are on the stop warp thing. It is going to cause a lot of issues with how fast things are now warping.

Of course instead of staying docked I wound up undocking to assist in a Drake/Armageddon kill that was related to a Gnosis kill the boys made a bit before. http://seventwo.killmail.org/?a=kill_related&kll_id=19937043