Eve Vegas 2013 - Day One: Taking Pictures in the Dark is Hard

It was one in the morning and I was getting a burger at burger king to fuel my writing. I was hungry and had just changed and removed my makeup after the pub crawl. Would a resident be standing in the Rio at burger king at one in the morning on a Friday night/Saturday morning? I had debated room service but I was not in the mood for a 15 dollar burger and my husband was already asleep.

I have no glorious stories about the pub crawl. It was an interesting event. I can say that it was well put together and things ran smoothly. People got left a few times but that is going to happen. The various clubs were very polite and enthusiastic. I felt bad for one gentleman who was holding a rope for me to go up to the party I had just come down from. We had private areas at two of the places and the drink tickets seemed to be enough to keep everyone happy.

I went down and got my pass right at eight. There was already a line and people formed up. It was a mix of people going and people staying and just meeting each other. As is my wont, I floated around the edge and watched people. Some I recognize, some I heard their names and figured out who they were. As it often was, I was completely ignored until someone would realize I had a badge on. Then people introduced themselves. Often I was asked, "Are you a player?" It was a common question through the night as it seemed that a large portion of the female attendees were not Eve players.

I floated for an hour. I introduced myself a few times. For the most part, no one knew wtf I was. I am not e-famous it appears. Then when asked my corp they didn't know who 7-2 is or where Molden Heath is. That also became a theme through the evening. "Is that FW space?" or "Is that Sov or NPC null?' and one of the best, "Oh that's way out there isn't it?" On the bus I had an incredulous look as I explained that Molden Heath is not FW low sec. "Oh. Real pirates then," was the response after I explained that I gave no fucks about FW complexes and chasing FW ships around.

The limos were limo buses and party buses. I wound up riding in the big pink party bus that I saw earlier in the week the entire time. It was kind of cramped but everyone was good natured and people did strike up conversations with me. I tried but I'm pretty pathetic socially and as the night wore on and the alcohol flowed conversations got weird, quickly.

The first stop was at the edge of an outside mall. We eventually found the night club. Two drink tickets each. I found a corner and pulled out my notebook to scribble notes about things. Little stuff like my amusement that PL has their shirts that so closely mimic the developers. Watching people get all giddy around the Mittani is almost as amusing as the Dev excitement. There was a ton of developers buzzing around. They are like super stars when they enter the room.

I wound up going outside and waiting for the thing to finish after the first place. Loud music. Alcohol. Smoking. Large groups of people. None are my environment and after standing there for a minute I decided I'd admire the palm trees and enjoy the weather instead.

The second location was down town off of 6th street. A place called Commonwealth. That had an upstairs, outdoor roof deck/bar thing. The first places had a bar that was also open to the outside. Desert weather. The roof deck was nice and I stood there for a bit admiring the view. When I went downstairs my step sounded a bit strange. I looked down to see that the heel of my shoe was detaching from the shoe. I was wearing a pair of cork wedges that I have had for about seven years. I like them a lot but it seems that cheap shoes have a life span.

That left me dragging my heel the rest of the night trying to avoid a full detachment. I slipped outside and waited near the drivers on the corner until it was time for the third stop. On that ride I was asked if I had gone to Fan Fest because the person remembered seeing me around. "Yes," I said. I keep popping up at these events. Perhaps one day someone will assume that I am the Eve player. Everyone was pretty buzzed and the general volume was increasing. I'm a terrible loud speaker. I can bellow when I need to bellow but being loud just to be loud is not my thing.

The third stop was the Stratosphere with a section reserved for our party. This is the time when I got a bit irritated. I know I'm a wallflower. I find it amazing how many people just step in front of me when I am in a line as if I am not there. Maybe I am not. I'm not sure. After a while, I just kept watching it happen. One person saw my badge and in shock goes, "oh you're with us!".  Yes. I'm behind the roped off area for us waiting for the elevator. Yet something about me causes people to look at me, past me, and step in front of me. I could turn on my more forceful side but I save that for work.

I did finally get an elevator. On that elevator I met some Tuskers. They were proud of being Tuskers. I finally leaned forward and said, "I'll tell Naoru you said hi." At that point they proceeded to tell me how Naoru has a spy ticket on their forums and how they have all these previous Tuskers there and they call them spies. My response was, "What do you have to spy on?" While I called Naoru a Tuskers spy on THC2 when he first joined I can't imagine what spying on Tuskers would reveal. They PvP mostly solo? Wee? 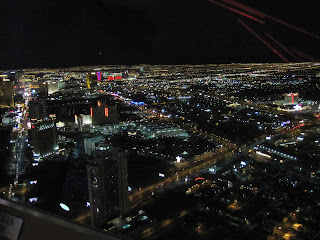 I settled into a chair and wound up benign asked if I was upset, okay, angry, and offered drink tickets which I try to politely decline. That was a weird time since I was in a generally good mood, bored, tired of loud music and loud people, and hungry. I will admit I don't have a good happy face. I stick with a neutral wrinkle free expression. With everyone around me starting to scream, yelp, bang on things and spontaneously dance, I probably did stand out. We had spent 45 minutes per location at the previous two locations. At midnight I asked the driver when they were leaving and the answer was at one.

I went to get a cab. It turned out to be a painless process. My driver was interesting. He told me how he got into a fight with three Chinese ladies at the start of his day. His days are twelve hours. He kicked them out of the cab and says, "I've never struck a woman but if I was ever to hit one it would be a Chinese woman. I can't stand them."

Back at the hotel I hobbled to my room still dragging my shoe. Scrubbed the makeup off and went to find a burger. In the morning I will go have breakfast at the cafe near the convention rooms.

For those who are a bit more social than my not at all and/or consume alcohol I'd give the pub crawl a thumbs up. I had a pleasant time. Everyone seemed to enjoy themselves a lot. I guess there was spare space because a group of people who were not going to go got to go. That was very cute and nice of them I think.

My favorite quote of the night: "Iphones don't crash." I giggled.

Also some random FW guys decided that I'd want to hunt them down. I tried to explain to them that I don't care. It was hard.

Another question I was asked several times was, "Who and what do you fight?" and the puzzled and shocked reactions to my response of, "Everyone and anything." I'm going to have to wrap that up in its own post.