This will all start with pizza at midnight. But before that, I will rewind a bit and explain my day.

One of the best parts about actively blogging and travelling to Eve related events is that I get to intermix the two. The only reason I am sitting in the Rio at the moment, deciding on what pizza to order at what feels like three in the morning but is only technically midnight, is because of Eve. Midnight pizza is amazing.

Anyway, I am in Las Vegas. This is my third trip here. My first was to get married, my second was Eve Vegas 2012 and now I am here. From what I have gathered people are trickling in. CCP will be here in some number of hours. I have no idea what the agenda is. I believe Friday is all social stuff and the actual 'conference' part of this starts on Saturday. It matters not, I am enjoying myself. 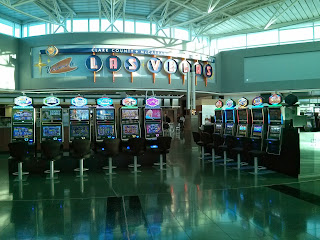 The flight from DC to Vegas is just under five hours. It went problem free. I had a nice lunch at Dullas International Airport where they gave me a metal fork and a plastic knife. The TSA also searched my luggage. And, some casino sponsored a free pack of mints and advertisements. The trip to the Rio was rather smooth but I forgot what a tip focused place Vegas is. The options for tips in the taxi were 30%, 40%, 60% and other. Yeah.

The Rio is nice. I asked for a room with a single bed but all they had was doubles. It is not world shattering. The hotel is huge however and quite the trek to get from one part to another. It is just off the strip and there is a shuttle that trots you off to the strip every thirty minutes. Then people tip the shuttle driver as well on both sides.

I guess we could have ridden in the big pink limo party bus. 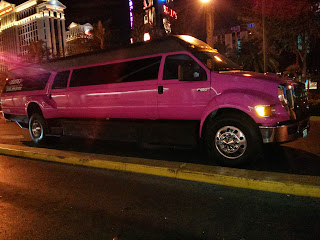 Dinner was sushi and then some walking as I dragged my husband off to a sports bar that has a fantastic desert. I was hoping they still had it and they did. To my amusement he was not unhappy with said sports bar. The girls run around in booty shorts and corset tops. Desert was amazing. 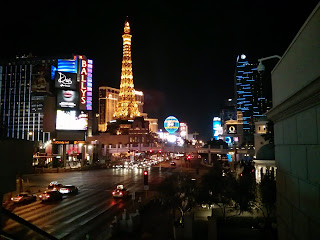 After food late night Vegas was starting to break out and the girls that dance on top of the various bars, gambling tables, and such were out. 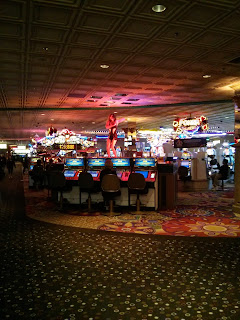 Back to the hotel and eyeballing the midnight pizza. I am pushing my schedule back so that I am not a zombie. My bedtime on work nights is 2200 EST. Not acceptable in Vegas. Eve stuff starts Friday evening it seems. Tomorrow, more running around and fantastic food. The weather is great. It is in the 70's (21c) during the day.