The Nosy Gamer said that alea iacta est had to be used at least once by everyone for Rubicon. I decided to take the lazy way out and use it as the blog title the next time I posted about the Rubicon Expansion.

I wanted to test the Siphon when I came home the first day of the SiSi update. I wound up being kept an hour and a half late at work which made my entire evening a bit of a mess. I spent most of the time doing logistics but I logged in to at least touch the changes. Mostly, I frantically did logistics. Moving the entire corporation and all the things that make us said corporation is amazingly exhausting and non ending. Then, as I patched and updated I realized that the account I planned to set up the POS to test the Siphon with is not mirrored over onto her new account and the old one is inactive. Sugar is behind by huge chunks of skill points. She has 40 million now. I'm also no longer in THC2 and seeing the corp ticker makes me somewhat homesick.

Interceptors are scary fast. Entering warp is almost instant. The graphics have been sped up so the ship roars towards its location at full speed. I also took out a Cynabal and it warps and enters warp much faster. Very noticeable and pleasant feeling changes.

Maybe interceptors are too fast. I'm sure we'll figure it out. Just to fly Interceptors are amazing right now with the speed. Frigates will warp before all the things and land before the rest of all of the things. Blockade Runners now do ridiculous warps.

What I did notice was a lot of UI changes. The look and feel of the UI is different. The skill book icon has changed. I really don't like it. It is now a dull, blah gray. It was a vibrant yellowish orange before. The completed skills have a star in the blah gray book. 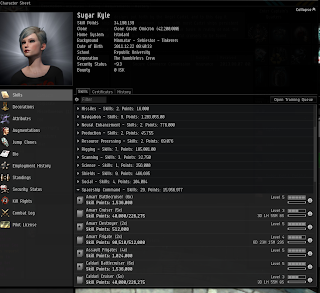 The show info is also different. The green box is "what you need to command this ship" and the other weird symbol thing is the 'mastery' things. Is this when I start a protest and go "I'm mistress of my ship?" while frothing at the mouth and ranting that my gender is not represented? I don't actually care one bit and only thought of that as I started typing. It would be amusing as it came up. Mostly, I thought about it because I don't like the term 'mastery' plastered all over the place. It is kind of overdone. 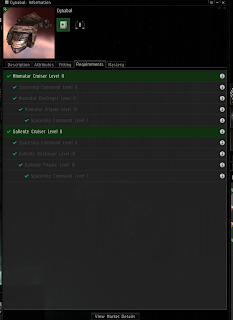 Very interesting was the tooltip popup over ships in the market. 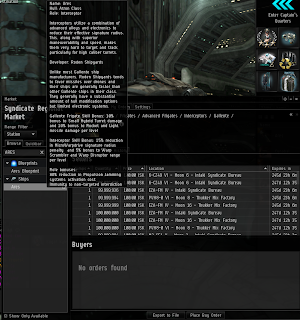 There are a lot of UI changes coming in. It is neater but at the same time some of it is much more blah. A lot of gray on gray on gray on gray. It is neat but so simple as to look unpolished. I like the pretty artwork. Maybe I'll change my UI colors some. I don't know. There was a comment of, "They are spending resources on the UI instead of fixing X?" I pointed out that I suspect CCP developers have specializations. Not every developer is going to be able to work on every aspect of the game code. The person working on the UI may not be able to rewrite POS code.

I've heard a lot of good and bad about them. I hear a lot of, "I won't be able to escape being scanned and tackled by an interceptor anymore." My response was at what point does having the right tools for the job make it okay to get the job done? Eve is not kind to small groups at all and that is painful to those of us that enjoy that lifestyle. Yet, the game is more than one group. When is bringing the correct counter okay? When is it okay for someone to bring the resources onto the field to achieve their goal which is tackling the nano ship. I know that everyone wants ships to feed down their pewpew grinder. I'd love every tackle ship to fly straight into my guns and die. However, if someone puts the resources out to achieve the goal, the goal is achieved. If Eve is balanced around "I don't want to die ever because I like to take fights that are hard" what balance would that actually create?

Some people think the new missile module is amazing. Others are calling it crap. That may mean its balanced. I don't know. I'm going to go to bed.

There is a lot of yay and a lot of nay going on. Lots of videos and screenshots are up for those who do not do the test server thing.
October 07, 2013