Red Cross in the Night

Vov, having finally cleared all of his kill rights, was able to trot up to Jita to get his Machariel. He's been planning on it for a few months but laziness, internet connection issues, and the side effects of being a ganker had slowed him down. When he showed me his Machariel fit I commented that it was the Gankariel. He promptly chose that name for it to my pleasure. Not that Vov needs the income from his regular hauler ganking. It is just fitting.

He promptly spent the evening trying to kill a mission running Machariel in Oddelulf. It refused to give him the honorable Michariel v Michariel PvP he longed for. In fact, after I camped the gate to the mission in an Aries the guy eventually left and cancelled his mission. Amazing. He lost so much ISK and LP doing that... (cough).

Anyway, a little later, after we tried to kill a Carrier who managed to degrees a bit too quickly before we got the dreads in; Vov invited me to do a 5/10 with him. Of course I agreed. With pleasure. 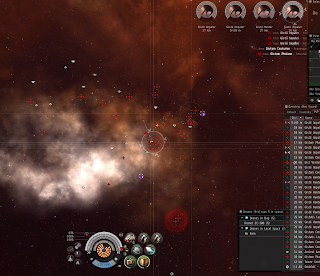 I so often hear this hatred of red crosses. That short of irritation. Perhaps an eyeroll and a steadfast commitment to no PvE in Eve. It is such a mantra that it almost seems like a shield. Sometimes it is nice to zone out and make some ISK and keep someone company. Its fun to play with a new ship. Vov had his Mach and I had my half assed refit Sleipnir.

Well, we only zone out but so far. It is still low sec. Even tucked away in the heart of friendly(ish) territory that must be remembered. And we do. With two neutrals in the system dscan is tapped every few seconds. I don't think we looked particularly engageable. A Machariel, a Sleipnir, and a Scimi. We might look tasty to one that doesn't know us. A quick killboard scan and an eye at our security status might speak of another thing.

Vov and I did our complex. We got shiny B-Type loot as well. Around 500 mil ISK in look that we will split once I get it to Jita and sold. Vov invited me for company. Not because he needs me to run the 5/10. That is why he brought the Machariel down. But because it is nice to have someone to fly with in space. Even for PvE.

I'm not ashamed to do PvE. Nor is he. I had a discussion earlier with a new player that wanted to know how pirates made their ISK. We make ISK just like anyone else. With Tags4Sec my boys are now often in the belts. Wex just tag rattde himself into a Machariel. I could but smile at that. A slightly different lifestyle he is living these days. Those of us that scan often find sites to do. We do level 4 and level 5 missions. We live a completely normal Eve life. Living in Low Sec makes our approach a bit different. We just engage in PvP at the same time. When we find someone doing a complex and fail to kill them, we will complete it. If we do manage to kill them, we will still complete it. After all, it seems silly to waste good ISK and leave it in space like that. Life in low sec is consumptive.


That makes life normal for me in Low Sec. It isn't safe. Yet, my boys will fight Vov on one side and fleet with him on the other. A soft word to tell them that I am in fleet with him doing productive activity and they leave him be. Not that he needs protection from them or they him. Simply, it would be irritating for them to attack my fleetmate. And those interactions are normal too.

The existence of the carebear is such a hot topic in Eve. As I watched my boys finish their siege cycles earlier by shooting each other I could not help but think that for someone who has never left high sec they will never experience this. The frantic sprints across space. The call of "cyno up!" as the roaring echo as the capitals land on the field. It was a support fleet coming to DP earlier when he was poking a fight on an undefended POS as much as it was Vov and I chilling in space ready to PvE and ready to PvP at the same time.

I'm not embarrassed to PvE. It doesn't take anything away from me. I can understand not liking to do it. There are many things in Eve that I do not like. Devaluing it I have never understood. But, devaluation is the nature of some. Not for me. I'm as much of a carebear as any other if carebear is one who indulges in PvE. I will never be able to call myself a pure pirate. That is fine. If it meant that I could do nothing else with my time then I do not wish for the title. It may be why I smile at my reluctant muse who so boldly gives me the title of pirate as he points out my obvious ignorance to anything else.

Life in Low Sec I will have to label as good, right now. We're back home from deployment. I am warm and comfortable in familiar space. My boys are around me. My hangar is full. My wallet is comfortable. I have people who want to spend time with me in game. Tonight has been a good night. I killed nothing even as I tried to kill something. I don't care. If isn't the explosions or the kill mail that brings me back time and time again. It is these moments. In the deep, quiet darkness, fleeted up with good company while being productive. It is amazing what a little camaraderie and ISK making can do to help one relax.
September 11, 2013