Off to the Races

When the fleet commanders started having slot fights over who was taking what fleet out when, I had a good feeling about the weekend.

One of 7-2's basic aspects is that it is semi-nomadic. While they have a home base they like to do deployments. The summer being the summer this toned down. To refresh and restart and get all the new people (like me) on board a shorter term deployment has been in the planning and preparation stage for the last several weeks. My circle of movement around Eve is very small. This will fill a few more holes in my map.

With everything in the table, Altaen snapped the whip. There was a mixed murmur of excitement and fretfulness. However, when the slot fight broke out and Altaen said something along the lines of, "It's my deployment damnit" it was probably a good sign.

We packed ships and planned the jump. Our vacation home was picked and it is someone elses station. That is something that Altaen loves. I personally worry that it will be a weekend of station games. I'm hopefully that it will not. But I packed up all the called for stuff anyway. I filled the nooks and crannies with frigates. I don't expect to undock and suddenly run around trying to take on the world but I can pretend I might. At least, I'll have plenty of frigates.

It is odd looking at a carrier full of ships with the assumption that they will all be lost because the FCs are planning who knows what. I shoved in some logistics ships as well. I want to start doing that more. I feel its to soon. I know nothing about PvP with guns and diverting my attention seems foolish. Logistics is a lot of responsibility and I don't think I'm ready for it. Still. Logi loaded. Off I go anyway. Off everyone went it. 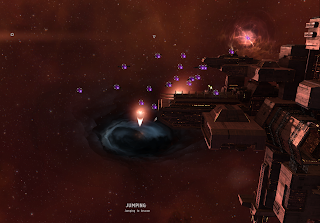 This is where I am consumed by nervousness. I'm not the get in someones face and challenge them. It is not that I feel the need to get along with everyone. I've just never been confrontational for confrontations sakes. It is an odd view watching the boys cut loose, drop war decs, and undock to start fighting whatever they can see.  And then the call for Aurgorors. I hesitantly lifted my hand and volunteered.

My first time out in a combat logistics position met with me dying. Station games were decided to be indulged in. I loathe station games like I loathe bubbles. I think they are absolute shit (add about three hours more ranting here). However, I've promised to fly in every fleet I can. If my FC decides he wants to try to get someone to slip up on the undock then so be it.

I just don't get the games. But I am a dock or undock type. I know I don't get this type of play. The nice part about the logistics was that there was more to do. I got comfortable and relaxed. I knew the words of this logistics song.

However, when my T1 Aurgoror was neuted out by an Armageddon and the chain jammed while I was primaried by battleships (webbed too) it vaporized. It was a nice, neat move on their part taking the three of us apart. There was no docking because of weapons timers and we were on top of the station because station games.

Chella's first PvP experience ended brilliantly. It seems as if I no longer know what information the FC may or may not need about the status of my logistics. I went from slow shields to 'poof' in a handful of blinks and before the other two could land reps on me. The other two went down right behind me which was expected. They primaried us and took us out. T1 logistics cruisers are not exactly sturdy. Add to it the cap chain breaking and battleships blapping. They added an Archon for support.

They decided to keep at it. Times like this I'm rather sure that I will never be a fleet commander. My mind doesn't wrap around taking some fights. I know that people mess up on stations and lose shiny things. I may not have the right mentality or perception to appreciate that kill being worth the time. Someone asked what is the difference between going thirty jumps with nothing and playing station games. For me it is the flying. I've lamented battleships before because they just sit there. Diz said, "It's about your proper range." I guess. I am just to obsessed with flying it seems. Combat that is not flying quickly stops making sense to me.

After the boys took down a Damnation the fleet was switched over to assault frigates. I switched windows, logged off Chella and switched into a Jag. Jaguars always make me feel good. Flying makes me feel good. The assault frigate fleet swarmed a blackbird and darted away. I think those tactics work better for me. They make more sense to me. People say that you need patience for station games. I have patience but I guess not enough.

The assault frigate fleet assaulted a Scorpion but he was paying attention. We stopped running around because it is a weeknight still. I was tired, I admit. After twelve hours at work and two hours past my work night bedtime, I was exhausted.

There is a lot of enthusiasm. A lot of energy. A lot of aggression.  A lot of abandonment. People want to go home with empty carriers when we go home. I've always been torn between the idea of 'losing all the things'. I know that the reason for loss is because of a lot of activity. Loss is a side effect and not a bad one. But when people don't plan to come back in a ship I'm always torn by the image of losing a ship just to lose it. I know that is not the intent (always) but it makes me twitch. I tend to take things too literally.

However, I committed. I plan to join in everything I am online for. I'm home for the weekend and able to free up my evenings. Maybe I can abandon some of my natural caution for some carefree abandonment.
September 06, 2013