How to Waste a Billion ISK

Most of the fleet is still shaking our heads at the moment.

You see, Altaen was out in solo warrior mode in a Cynabal facing down a four man Battlecruiser fleet (myrm, myrm, cyclone, harbinger). Vand offered assistance and glorious Talos were undocked. I was in a Jaguar. Off, Van, Floyd, and Robinton went in Talos with me streaking ahead in a Jaguar. We spared with Altaen's feet and they decided they did not like us and ran off to the high sec pocket.

Molden Heath has a five system high sec pocket two jumps out of low sec. While we tried to guess which gate they would come out a tenish man cruiser fleet was seen a system away. They spiked local and we immediately lost interest in the hiding battlecruisers and chased down the cruiser fleet. We played gate jumps and they decided to engage us!

Explosions happened and they decided to bail before everyone died. That is a change for that group. They used to do last man standing. We chased them down but we were unsuccessful with catching the stragglers.  We then went back to loot the field when local spiked with a Navy Raven.

Wat? Like hounds our heads swiveled to the scent. We decided to bolt for the high sec gate with one person left to watch the low sec gate. There was a chance that they had come in from high sec but the chance was greater that they were making a run for continuous Empire from the low sec island. This is not an uncommon trip made to bring things in and out. We catch all sorts of interesting things like Orcas, Freighters, and shiny battleships. Our gamble paid off and we landed on the gate with the Raven Navy Issue. Yay!

Coms were tense. It is amazing how much information we relay at that point. If he had a micro jump drive we were going to be screwed. None of us had short points. If he was stabbed we'd not have enough points to overcome his stabs. However, we'd make a heroic attempt at it with bumps and tenacity because it was there.

That particular gate is a large, constellation gate where people can easily spawn 40k away from each other. Sadly for the shiny, shiny Raven he spawned 10k from the Cynabal and Jaguar. Point. Point. Bumps. Talos burn. Raven down. And followed by his pod.

We then learned that the seal club was out in force. No micro jump drive. No warp core stabilizers. Just a Raven trying to bolt to high sec, balls to the wall, throttle to the floor, hair down, heels off, and taking on the world with a Slave Beta in his head.

I'd not be writing this with all honesty if it were not for what happened next.

He then proceeded to place the same bounty on each member of the fleet. With that type of ISK he could have finished off his slave set instead. However, he topped it off with:

The kill right Ammaterasu has on you has been made available to all for 0 ISK.

As always, I have a head desk moment. Low Sec PvP corporation of outlaw sec status people. We are freely shootable in every sector of space. I had also cleared my bounty a few days ago. Thankfully, it is meaningless.

A killmail that wasted a billion ISK. 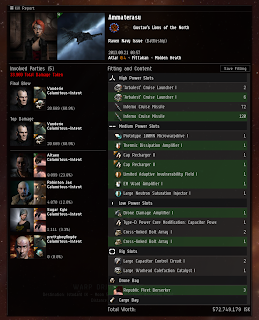