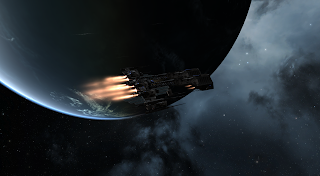 Oh how amusing and fantastic the deployment has been. Is the weekend almost over already? The local groups are fantastic. Local has been classy. Fights have been had. Our participation has been fantastic.  People get their shit together and moved with us. We've fleeted. We've roamed. We've maintained a lot of organization much to our own surprise.

Our morning fleet started when we ran to the null sec hole to poke at  XDeath yet again. On the way we killed a Tornado and a Cynabal. Then we jumped into null and managed to catch a Vaga on the sun. We skirmished on their station and killed a carriers fighters before we left as more carriers and all the sniping things undocked. They undocked all of the things on us (again with the carriers to the gate). We decided to recoup and regroup. At that time WEAZL was engaged back in Tasti with some Tengu.  The call went out! Assault frigates sprinted back home. Rawr!

We wound up killing two Tengu that belonged to the hot dropping corporation from yesterday. A very nice tackle by Floor nailed down the second Tengu as we buzzed around at full speed after killing the first and trying to tackle the rest of the fleet. We had to leave a stabber behind to kill the Tengu.

After that, we reshipped again. The assault frigate was a late call in our packing. And some people use MWD and some people use Afterburners. We've been cannibalizing fits and refitting people on the fly. I brought a stack of Jaguars and I am now down to just one after giving them out and me and people losing them. We have been burning through ships faster than expected. We've had to do supply runs from Jita as well as ship sharing and contracts flying in the middle of combat to get people into the right ships. It has been a lot of fun and very intense.

Reshipped we went back to null sec. They seemed a bit mad. The gate was rather full. The boys managed to kill a Talos anyway and we also nipped a Falcon as we all died to bombs and bubbles and alpha. It was glorious. I we on top of the Falcon who was trying to jam all of us as we killed him. TiDi had hit so he exploded slowly as I made it out of the bubble and died.

Back at the campgrounds we stood down the official fleet and put together a kitchen sink of shield ships to go off and do stuff. I decided to undock my stabber. I had put it together a while ago but never flown it. Bold and proud we ran off into space. We were disorganized and a fleet of assault frigates and all the ECM jumped through us. Then they came behind and pincered us with a stack of talos and pointed things.

It was quite a cute tactic and well done. I think we may have irritated them some. But they pincered us and killed Brantus. We saw they were trying to pinch us so it was starburst time. I was about to warp off when pointed. I jumped knowing I'd die on the other side. But we have to try. They were taking down another squad member that had to jump. Would I make it out? Nope!

Three blackbirds and two falcons. Webed, scrammed, jammed, damped my entire bar was illuminated with bad things happening to me. I've been giggling. They put together a solid 7-2 fuck you fleet. We're not going to engage that in our kitchen sink fleet. That being all of the jams. They did kill three of us in the process. It has been hysterical. The three fights we have had previously they did not bring all of that ECM. Heheheh.

I had to putter AFK and the boys wound up getting hot dropped by XDeath. No one died. Amused as hell we docked up and started prepping for the next fleet. Down to my last Jaguar and my Wolf hopefully I'll be set to make it till we head home without reshipping.

I think the locals may be tired of us?

Word from the Heath is randoms have already started to appear to camp the various gates and hang out. Exciting times. Also, the fight with Goonswarm was frapsed and will hopefully be edited and posted soon along with possibly another good fight we had against Dead Terrorists that I missed because I was at work.
September 08, 2013