I got a present today. 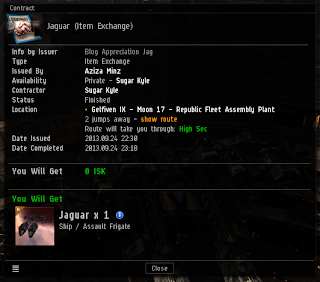 This came after I came home from a very long, very miserable day at work complete with a headache Advil was not making much of a dent on to this eve-mail:

I've never commented on your blog, but I've been reading it for quite awhile now and I must say that I really respect both your POV and your writing skills.

As a reward for enhancing the value of my game, I've contracted you a Jaguar hull in Molden Heath to show my appreciation in a concrete fashion.

Keep up the good work and fly better than your enemies.
Aziza Minz

I could be all coy and blush. "Who me! Aww gee!" Instead I squealed and wrote him a babbling note of thanks for reading and for the Jaguar. It is very cool to meet people who read what I write. The feedback is valuable and it is pleasant in a warm, ego fluffing way as well. I'd love to be all quaint and humble but it thrills me. I do admit that I'd write even if no one read it but the reading encourages the writing as well. But not only to have someone give me kudos but to get a Jaguar as well?

And as much as this is about me it is really about the Jaguar, or more chance, my love of Jaguars which some people have noticed appears to be a favorite ship of mine.

Vov and I have been chatting of late. Vov gets into these intense discussions about why he likes particular ships. He uses a lot of words such a force projection, nano, engageability, various DPS calculations, speed, ability vs tackle, and such things. On the other side I use words such as, feels right, kinda slow, lots of fun, to define my ships. Vov will often sigh and pet me on the head. Why he tolerates me I don't know. I grew on him I guess and now he is fond of me despite my lack of technical focus.

It is not that I am not technical to a certain degree. I have my spreadsheets (nothing fancy) and my calculations. I understand fall off, projection, rages, damage, tracking and all the important words when it comes to the mechanics of spaceships. The difference is that I do not fly my ships based off of their statistics. I fly my ships based off of my personal pleasure.

They are not correct about the shit part.

It is a matter of desire. What does a person want from their spaceship? For many people it is everything. The desire for everything is a greater factor in various ships being considered shit then those ships actually being shit.

That's it. I like the ships. I like how the ships feel. I like how they respond to my commands. I am productive and successful in them. I am happy in them. When I undock I am in my grove in these ships that I fly obsessively. That grove creates pleasure at what I am doing which enhances my gameplay which keeps me in space which continues on and on and on and on. I cannot discover that just on stats alone.

For others the stats matter. Gathering and crafting what should be perfect and amazing is where they draw their pleasure in the game. I know that my Jaguar is considered suboptimal by some but the results that I bring to the table with my Jaguar help to balance out the technical suboptimality. If a doctrine is not called for or a certain type or need of ship not called for no one tells me, "Sugar, please go put your piece of shit back in the hangar and fly something useful." The people that I fly with would do so if I came out and failed to do anything productive in my Jaguars.

But, I don't. I come and I lay down the tackle. I normally live through it. The fact that the FC will leave me as the sole tackle ship on a roam with nothing else to tackle tells me that whatever I a doing I am doing right. I could do it better and I try to improve myself but in my chosen ship doing my chosen task I bring productivity to the table.

It has taken me a while to figure out what I like in a ship. The answers are speed and agility. For some it is tank. For others it is DPS. Some people love their favorite flavor of e-war. For me, it is the maneuverability of my ship. It is why the Hurricane nerf hit me so badly. My Sleipnir was nerfed as well. I did notice the mass increase, but the Sleipnir has other aspects to it that help compensate for it.

Why not Fleet Canes? It is their cost and their use int he fleets that we run. It is not that I find them to expensive. I fly Cynabals quite happily. It is the place where I would use them they would stand out in price (and thus be primary due to the ISK efficiency aspect of fights) or not fit into the fleet. It is a very, frustrating thing because I do love the Fleet Cane and find myself with no use for my beloved stack of them.

But not having a role in my current game style is fine. I think everyone who enjoys flying ships as a major aspect of Eve has a go to ship that they fly. It may be greedy of me to want more than one. For now it is the Jaguar. Unless CCP gives it the classic weight gain that they have been giving Minmatar ships I hope to keep it so. I do fear for my Jaguar. It is a little bit of a neglected stepchild by many but it fits me so very well.

For now I'll enjoy myself. I don't care for DPS I've found. My strenght is in my support abilities. The Jaguar functions brilliantly as a support ship. Balance in my opinion isn't just about each ship doing each thing but its a larger, more global image. I'll have to write something about that later.
September 25, 2013