A Whoops that Didn't Matter 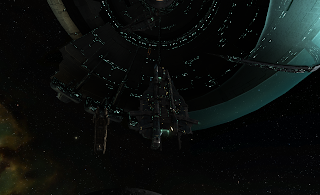 I learned that triage markes sparkly colors wash across the Thanatos. It was a very pretty effect that I watched as I drifted off into space, unable to do anything for the five minutes that my triage would be active. We were having a class on logistics which included playing with our triage. We were also on the test server so what would be a panic attack on the main server was giggle worthy on the test server.

Last night, Aliak asked Van to run a class on logistics. 7-2 has closed recruiting for the moment to allow all of the new members to learn to mesh with each other. Even experienced pilots still have to learn each other. Language, lingo, behaviors, habits, fits, and such things are all different from group to group. We had a complex argument about fleet doctrine names the other day where people pointed out that hellcat was a known common term and other people pointed out that not everyone interacted in the same circles to know some fleet doctrine names as anything but silliness.

7-2 has several people that often fly logistics. They are all experienced players who enjoy that role. People will talk about the fun and importance of pewpew and being in someones face forcing the explosion. I understand it but I'm a firm believer that there is as much skill and interest in handling the other aspects of the fleet. Being able to do all roles is important and gives the corporation greater flexibility depending on who is available.

We pinned down Vanderie and he promised to run one. It developed into Wex recording and writing up a transcript as well. And people got excited.

Training is important. Eve tends to punish people for just running in screaming and shooting off lasers. I've shied away from focused PvP training on the test server because I worry about people and their competitive natures kicking in. When people discuss 'owning' and 'dunking' someone when its a training situation it just makes me uncomfortable. I'm not competitive and I tend to shut down when people enter that competitive mode and try to escape the situation.

I've spent some time flying around dying on the test server. I don't think I've ever killed anyone but I've learned a lot about the damage my ship can take. There appears to be a breed of player that lives on the test server and bases their self worth upon their PvP there. I've seen falcons used to save people from fights and every link and shiny module available. The fights are very often completely imbalanced compared to what you would meet in similar circumstances. But again, I've learned a lot about what my ship can take and that is also valuable.

Something like the logistics training is more co-op. We built ships and undocked and talked and flew around doing basic maneuvers and getting to touch and feel the various modules. We played with being neutered out and got to focus on strengths and weaknesses in the logistics chain. We played with T1 shield and armor logistics as Van walked us through the various tasks a logistics ship might be called upon.

While most of us have done logistics and do logistics there is a difference between "yeah I do this" and sitting down to absorb it as a group with the focus on how we will do it, together in our fleets, in the future. Participation was voluntary and turnout was very good. That shows the interest of the future logistics pilots and that interest means a stronger logistics team who is there because they want to be there vs being there because they were forced into it.

The fun part of the test server was knowing that you know nothing and making all of the mistakes comfortably. Such as when Van was commenting about some aspects of the Triage module and why T2 triage is superior to T1 triage. That is when I hit the triage module while going to show info on it and wound up drifting off the undock. Instead of being an oh no, holy shit moment it was giggle worthy.

The test server is a very amazing tool. Some groups use it with a ruthless regularity and others have never thought to add it to their toolbox. Class day was an absolutely amazing and productive two hours of our day. I'm very glad I was able to attend.
September 23, 2013