TCS: The Taste of ISK

As odd as it may sound, I am not perfect. Occasionally, I fuck up. Fortunately it isn't overly often with my market. But it does happen now and then. I wind up with my face in my keyboard sighing nosily. Like the other day when I was quad boxing and accidentally sold all of my large guns to a buy order at half price instead of listing them for sale. Blah. It was a forty million loss on my side and an inconvenience to other's who had requested that particular module because they were setting up fits.

I have also taken a few hits due to the Odyssey market woes. I wound up with a handful (around 5) of over priced T2 frigate hulls. I ate the loss and got the hulls sold. The market seems to have settled back down. Most of the time it is extra zeros when listing ammo, leading to excessive fee losses. Nothing world ending but frustrating all the same.

I know I don't share as many numbers as some would like. I don't keep that close a track of them. TCS has been growing nicely. It became self sustainable quickly. Sometimes growth is fast and sometimes it is slow. Over most of the summer, my market has been shared and that cut a bit deeper into the upward profit trend then I expected it to. But in general, TCS has been growing. I started paying myself back and have done so to the tune of about 1.5 billion ISK out of the 5.5 I invested into the store.

Yet, despite my efforts, I have reached the newest hurdle in my market.

I need my own jump freighter. My lease has been taken by its leasor so that he can have his life. I have plenty of people who are willing to do jumps and hold the gate for me. But, those few sweet months of unfettered Jump Freighter access were addictive. I also have a good bit of stuff to move around. Carriers are amazing for fitted ships buy 10k M3 of fleet hangar space is no more than one of my cloaky haulers.

Currently, I have the choice of 3 jump freighters. Chella can fly Obelisks. My alt can fly Providences. My hauler/JF pilot can fly Rhea or Providence. I'm debating going for an Ark but I am not sure as of yet. I went for the Charon cuz it was more bigger and because Rhea was prettiest. However, CCP beat the Rhea with an ugly stick for some unfathomable reason and it is now bleh, ugh, boooring. 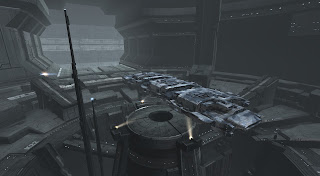 What I am going to do is start to siphon off ISK from TCS into a savings fun for a JF. It will do two things. It will give me a JF and pay of my debt to myself at the same time. Win win. Otherwise, I would just blow the ISK on more ships (I have 100 fitted ships between Isto and Bosena) or sitting in my wallet because I am a balance watcher.

It seems that it will solve both problems and be the stores first official investment.

I was wondering if I should liquidate some stock. Liquidate as in not buy as large a volume the next time around while siphoning off the ISK. I have no idea, yet, how to make my savings account from my sales. It is not a matter of keeping track it is more a good average of what I need to do to build up some six billion ISK.

I shudder just to think of the cost. I may be able to supplement it some with other ISK making activities. I tend to work well with focused goals such as this. I debated liquidating assets but I think that it will be more interesting to create the ISK for this project.

I do feel that I need the JF. Bosena consumes hulls now at a steady rate. The store is established enough that it is no longer a question of 'can this work' but one of 'are there enough people willing to do this?' I sell Procurers for instance. I sell them under high sec cost. People come from high sec to save that ISK and buy a bunch of stabs and run back to high sec. I help that happen. I let that happen because low sec is more than the pirates.

Its the pirates and the anti-pirates and the randoms that think there are no pirates. Its the people I like. The people I don't like. The people I don't know. Its the null sec people who use it as a waypoint and Black Frog hopping back to high sec. I refuse to be irreverent because I live in low sec. I refuse to live like a Fallout map where no one can even sweep the damn floor of all the burnt ass paper everywhere. High Sec may consider us to be monsters and null sec may want to sneer at us and wormhole space, well really, they come to play all the time in our part of the sandbox. But the only people who are going to improve low sec are the people who love, live, and care about low sec.  I consider myself one of those people.

And if anyone is interested in a low sec market startup blog with a RP twst, visit Guns and Banjos. They can call low sec a wasteland where no one lives. But, I think, the community can do better for itself if it wants to. And of late, it seems to want to.