And the great caravan sprawled across the desert. Aboard each strangely shaped beast was a burden that represented the sum total of one man. Across the vast planes the figures moved through the glimmering twilight as the sun set and chill darkness blanketed the travelers...

Perhaps it is not as poetic as I have written above but I do love moving things in mass. There is something fun about being in a carrier fleet and doing a project. Fun with expensive toys.

The first use many of us have for a carrier is a suitcase. They can fit two battleships and ungodly numbers of smaller ships in them. Many people who will have a reason to train into a carrier will have the ships to fill that carrier with. Asset acquisition is normal and many of us will have a day where we sit back and go, "Oh my. How did I get all of this stuff?"

More so than worrying about how the stuff was acquired the worry is how that stuff shall be moved. Such was the mountain of musing that Wex sat upon when he decided to jump ship from Faction Warfare into the Kingdom of Yarr. So far, he has proven himself to be a sweet, considerate soul and in that sweetness he did not want to bother us to much with moving his stuff.

Well, we couldn't snatch him from the grip of Late Night until after the Alliance Tournament was done. But with its end not even yet cold his corporation was changed and this morning he was debating how he would get things moved.

"How much stuff?" Kenrin asked him. Wex did some counting, we looked at the people logged in and told him we could do it. 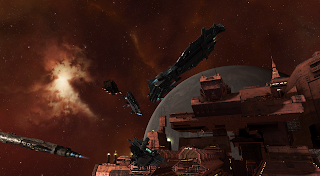 Access to assets is important. And there is trust. Moving Wex was a project that involved seven carriers and technically, a lot of trust. But, at this point, I do not think it crossed anyone's mind to take things or that his items might be taken. While "join my corp" and move scams are abundant in Eve, at this level and inside the heart of the corp they are not present. Not that teasing is not there but in the end stuff has less value then people. Much less value. To move Wex and settle him in and get him comfortable in his new home is to help a corpmate settle in and increase the general productivity and health of the entire corporation.


And slowly the sands gave way to harder, rockier ground. The smooth flow of the dunes crested into sharper hills edged with short, stunted trees. And cold winds ripped down from the mountains their dry chill a harsh change from the baked, heat of the desert.

Of course, he could have AWOXed us when we jumped. Fed us into the Faction Warfare machine as we landed...

Those stories are abundant in Eve, but one was not produced today. Instead we sorted his items, packed our carriers full and giggled at the frigate fighters chatting in local. Not disparaging giggles but ones of amusement at their chatter. The fights are often so different. The goals and motivations show how Eve may be one large universe but its subdivision into regions does create individual cultures.

Some shuffling. Some moving and the carrier fleet undocked again. This time to leap back to what was now home for everyone in the fleet. 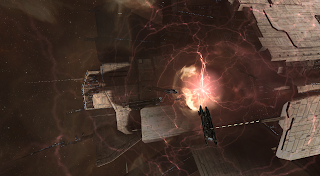 Verily, I say unto you. In these new lands with their harsh beauty and brutal life there is a sense of home. As one crouches upon the rocky edge of a cliff to watch the sun soak the canyon in a burst if light and warmth with the dawn, a thousand birds will break into songs of greeting. It may be a different shore but the sun still warms it the same.