Oddelulf seems like a quiet system. It sits on the other side of a high security gate. It has two stations and three low sec points. It is an anchor to Molden Heath's largest low sec pocket. There is one asteroid belt and an Icebelt. There is a level 4 agent in high sec that will send you on missions there but out side of that it appears to be nothing more than a sleepy Low Sec system that people travel through.

Occasionally it winds up on the front page of Eve kill, however. Such as the Rorqual that was killed last weekend by the King, Ueberlisk. 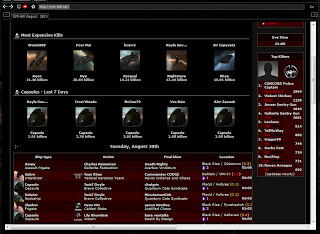 Oddelulf attracts delicious delicacies into his trap. He has but to stalk his system and wait. This particular situation was that they lit a cyno on a station with a small undock. The Rorqual landed outside of the docking range and Ueber undocked in his vindo. Point, Vindi webs, and a call for backup. The Thanatos and Archon that came in on the cyno docked. They undocked in a Drake and Prophecy. It didn't work out. The Rorqual died.

I know the above because I went to Ueber to ask him what happened.

For the most part the kill mail did nothing but ignite the envy that happens when something big and shiny is killed. It took me a few days to realize that it was on the front page of Eve Kill. A few more passed before I realize that a large chunk of Eve would wind up looking at it. The realization struck when the comments started to wander into the land of weird.

For anyone that does not know, eve-kill uses the disqus comment application to allow for kill mail comments. These comments can add invaluable information into the fight. They are more often used for insults and rage. One cannot forget the smart comments as well. I do find much amusement in the witty statements. I'd love to have that type of sharp wit but I content myself with the butter knife of my thoughts.

It is odd coming under the public eye. There are the normal CFC (Cluster Fuck Coalition) and RMT (Real Money Trading) comments. There are some pokes at Ueber. Such insults always fascinate me. It is easy for me to forget that not everyone has Ueber as a daily part of their lives. They don't hear of his hunting habits as he scans down and stalks the innocent mission runners that think they can dip their toes into low sec, complete a mission, and take off. After all, there is only one other person in the system.

But the commentators do not know any of this and that is obvious. From the one about killing defenseless ships to the insults that Uber learn to PvP. People who do not know the story just fill in some blanks and have at it in the comments section. Maybe it was a battle Rorqual that exhausted all of its drones attempting to kill the defenseless Ueberlisk!
August 24, 2013